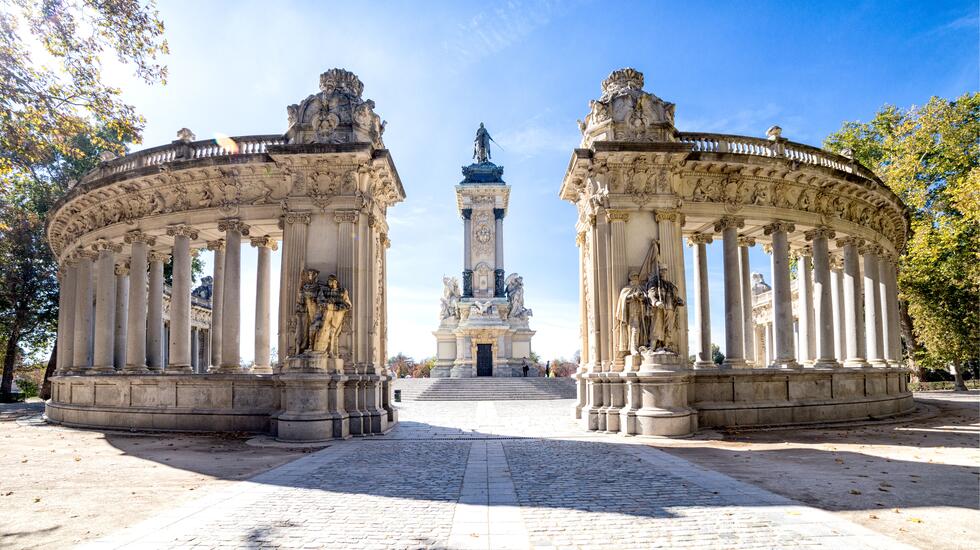 Arguably Arguably Spain's most ravishing city, Madrid pairs centuries of history woven into its grand plazas with an energy that is hard to match. Between its major museums, pristine parks, lively flamenco venues and Michelin-star dining, this is a city best enjoyed slowly. Our seven-day itinerary takes in exciting new hotels, centuries-old shops, palatial architecture, bohemian enclaves, legendary churro fritters and a Hemingway-approved bar. But be sure to wander off course, too, and forge your own path like a homegrown Madrileño.

How to spend seven days in Madrid

A historic corner of the Spanish capital, left, and rooftop sunset views.

Bed down in an artist enclave

Madrid is one of the world's great art capitals, so you might as well kick things off with a few nights spent sleeping in a gallery. At least, that's how it will feel at The Pavilions, an elegant yet delightfully un-touristy 29-room boutique hotel and art showcase just off Plaza de Colón. Enjoy a traditional breakfast of churro fritters at Chocolatería San Ginés, which has been ticking Madrilenian taste buds since 1894, then spend the day getting your bearings - this is a metropolis best explored on foot - working your way out from Centro, Madrid's historic core. Have dinner at Bodega de los Secretos, hidden underground in splendid 17th-century wine cellars.

Load up on breakfast at the Pavilions in preparation for a heavy helping of culture, starting at Madrid's beloved Landscape of Light, a region comprising the grand, tree-lined Paseo del Prado and El Retiro Park which was last year declared a Unesco World Heritage site. Gorge on three of the city's greatest galleries - the Prado, Reina Sofía and Thyssen-Bornemisza - all located on the Paseo del Arte (Art Walk), stopping for bargain lunch at La Sanabresa, one of Madrid's best casas de comida (traditional, homely restaurants). Just before sunset, head to the roof terrace of the Círculo de Bellas Artes cultural centre for cocktails, tapas and fantastic 360-degree views at Azotea del Círculo.

Do as locals do

Check into one of the city's most luxurious hotels, The Madrid EDITION, an avant-garde triumph that opened this year, designed by Ian Schrager, co-founder of New York's legendary Studio 54. Then head down to the banks of the Manzanares to see what's going on at El Matadero, a former slaughterhouse, which is now a far more appealing (and very trendy) complex devoted to modern cultural exhibitions. It's also close to the Planetarium and the large, loved-by-locals Madrid Río Park. Have dinner at Corral de la Morería, a Michelin-starred flamenco venue, for a double dose of great food and soul-stirring performance.

Discover the secrets of Europe's most liveable city

A day for local haunts and city secrets. Virtually on the doorstep of your hotel, but tucked away on a little square, is the lesser-known, 16th-century Descalzas Reales Convent, where you'll find works by Titian, Rubens and Velázquez. For lunch, stroll a few blocks east and step into the 1920s at La Venencia, a rustic venue that has barely changed since Hemingway was a patron, and only serves sherry and tapas. Then venture north to the neighbourhood of Chamberí to visit Platform 0, its historic Metro station, disused since 1966 and now a quirky museum - and where you can later sway the night away at Sala Clamores, a fantastic basement jazz and blues club.

Head to its hippest neighbourhood

Drop off your bags at Ocean Drive Madrid, your last hotel of the week. This design-led boutique stay just opposite the Opera Palace has a stylish rooftop pool where you can make the most of all that sunshine. Wander 10 minutes' north-east for breakfast at the little café in La Central de Callao, a glorious three-storey book shop (with an English-language section) that's a literary oasis in an otherwise busy area. Then forge north to the hip and happening district of Malasaña and drop into the workshop of Javier S. Medina, an artisan known for his "ecological trophies" - animal heads crafted from bamboo and wicker. Dine at Bodega de la Ardosa, a cherished, red-fronted tapas bar harking back to 1892.

Seek out the liveliest nightcap spots

Sleep in this morning, ahead of a late night, then put aside the itinerary and get lost for the day in downtown Madrid, where major plazas interconnect with narrow side streets. Aim north, past the breathtaking Royal Palace of Madrid to The Temple of Debod, a 2,000-year-old Egyptian monument given to Spain in 1968, rebuilt to align with the setting sun. Later, head to Conde Duque, a bohemian haven full of cosy watering holes; try La Dichosa or De Vinos for a stiff drink to kick off your night. Finally, strap on your dancing shoes for a post-midnight stomp at Discoteca El Son, one of the city's best spots for salsa and Caribbean music.

The Real Fábrica, left, and a plate of the city's renowned tapas offering

Hunt down a bespoke souvenir

Blow away the cobwebs with a coffee (or a bloody mary) at your hotel's OD Sky Bar, then embark on a day of shopping. There's no shortage of big name luxury brands in Madrid, but if you're looking for something local to take home, look no further than - all on the same drag - centuries-old stalwarts like Capas Seseña for exquisite capes, Casa Hernanz for handmade espadrilles, Casa de Diego for intricate fans and Real Fábrica, which specialises in everything from hats and slippers to olive oil and perfume, all sourced from small workshops across Spain. And make your last meal a blowout at DiverXO, the only restaurant in Madrid to boast three Michelin stars.

Ready to spend a week exploring Madrid? Start planning your trip at esmadrid.com