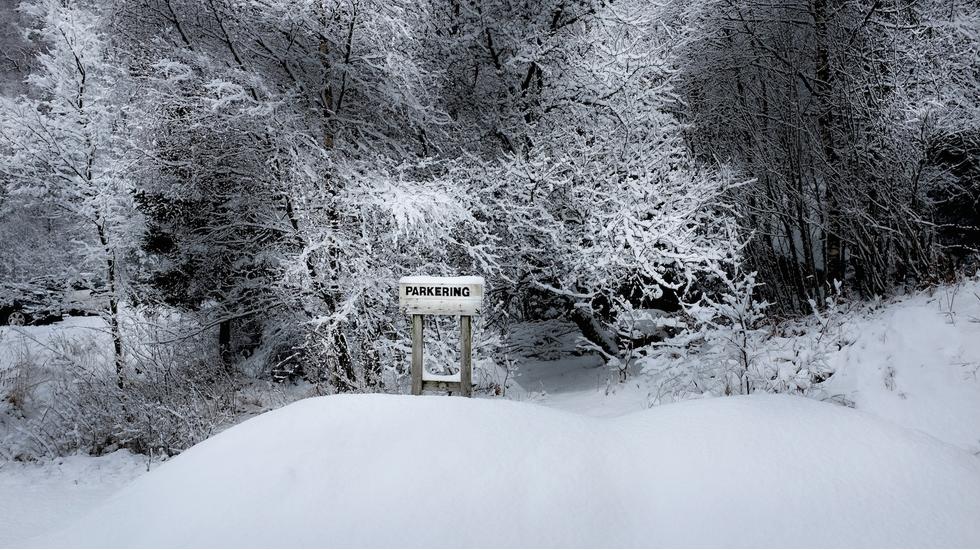 Norwegians Norwegians love a good walk in the countryside, regardless of the weather. For nine months of the year, you will probably find the climate quite challenging, but being out in the cold does have its rewards.

This is Handelandsdalen, in Kvinnherad, on the west coast of Norway. While gorging on all the fresh, crisp air I managed to take these shots in the eerie calm following a long Boxing Day snowfall. Here we were treated to a spectacle of branches laden with fresh powder and a river frozen abruptly into layers of ice, all along a path with no evidence of other foot traffic.

This landscape was forged over time by the nearby Folgefonna glacier. Handelandsdalen is what is known in Norwegian as a kuldehull, which directly translates to 'cold hole', meaning that it is a depression in the terrain into which cold, dense air sinks, making it noticeably colder than the surrounding areas. During the winter months the temperature will typically be well below freezing.

The region is considered remote, but it's not inaccessible. It's a two-hour flight from London to Bergen, followed by a little over two hours on the boat down to Sunde. After which, you're a 15-minute drive from parking at the edge of the forest and embarking on the easy hour-round-trip hike through the valley. There are boardwalk sections within the forest and an open house, which the locals find ideal for barbecuing in during the summer. Though if, like the Norwegians, you don't mind a nip in the air and prefer the scenery at its most dramatic, then visit for a stroll during mid-winter and hopefully you will be as lucky.