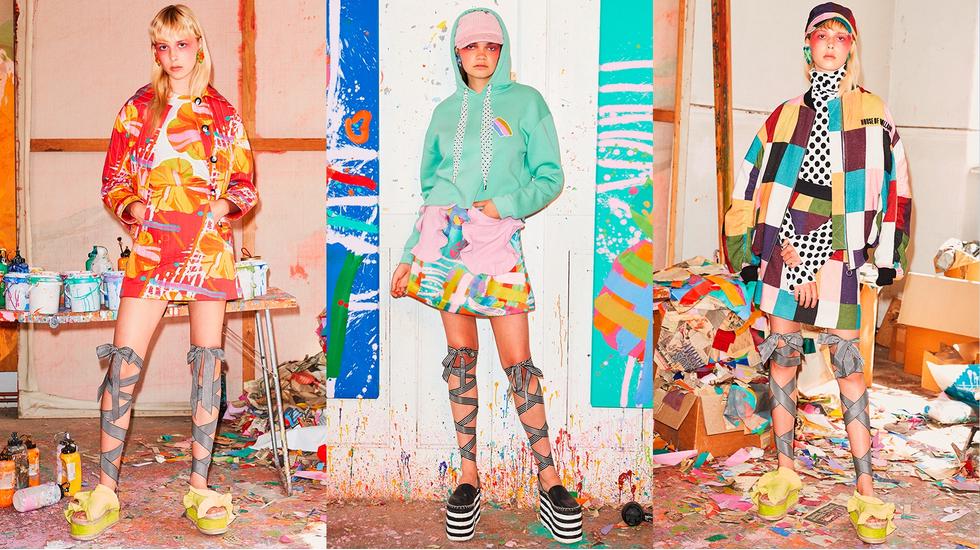 In In the world of Henry Holland, fashion is never just fashion. He's inspired by art, music and pop stars, celebrating the intersection of them in his work and bringing uninhibited fun to an industry that can get caught up in the speed and need to produce. But just because he believes in having fun, it doesn't mean he doesn't take his work seriously.

Holland's designs comprise layer upon layer of inspiration and his collections tell stories built on authenticity. Cool-kid entourage and quirky sense of humour aside, the British designer is well-spoken and knows what he wants for House of Holland's future. We caught up with him following London Fashion Week.

What was the inspiration behind your SS18 collection?

The collection was inspired by the idea of surfing pirates. I was looking at lots of 1970s photography of traditional surf culture and wanted to juxtapose it with another world so I started looking at pirates. It was about free and easy travellings of summer pieces; I was imagining a girl throwing something on over a bikini and going to the bar for a drink. Then we added in all the pirate gear - hats and jewellery - which was created out of found treasure. Finally, we built the pirate-ship set.

Was there a specific place that influenced the collection?

We looked at British pirates and souvenir spoons which are quite well known in certain coastal British towns, as well as places like Cornwall. But it's really about beach culture which is quite Australian, I suppose.

It changes every 10 minutes, but I really loved looks number four and 19. Number four is a full-denim look with one of the print stories and a pirate hat so it amalgamated all of the reference points. It felt like the perfect look to show the juxtaposition of the two reference points. The minute we tried look 19 on the girl who wore it on the runway we couldn't put it on anyone else. She only wore that one look in the show, but we tried it on so many girls after her and it just didn't work - it was obviously her look.

How would you describe the relationship between art and fashion?

I think there is always a crossover between art and fashion, or any visual medium. Fashion has a purpose; people wear clothing to keep them warm and to prevent them from being naked, but at the end of the day the way we approach the process of creating collections and building stories through clothing is a similar process to creating artwork. A lot of clothes become a canvas for which print designers display their work, especially our collections as they're very print driven. The visual language crosses over between the two mediums.

Your resort collection was inspired by the work of the late abstract painter Albert Irvin. Why?

The Albert Irvin story was such a personal one for me. He wrote me a letter because he thought I bought one of his pieces, but I had to write to him and say that actually I couldn't afford his work, but I loved it and would really like to collaborate. Sadly, he passed away before we could arrange it but his daughters contacted me and said he had been really excited about the prospect. I worked with them throughout resort season, shooting the collection in his studio - a time capsule which he'd used since the 1970s - using his work as a backdrop as well as for inspiration. This gives the collection a genuinely authentic narrative.

Do you think there's a division between social scenes in the art and fashion worlds?

Yes and no. There's a slight distinction between the two, but there's also such a crossover now. I love to look at outfits at art events. When you go to a fashion party, 90% of the clothes worn have been borrowed or the people wearing them made them, or they work for the designers. When you go to an art event, these people have parted with their money and put these outfits together themselves, so you get interesting interpretations of catwalk looks. There's so much money and so much creativity, yet people aren't necessarily that clued in upon the fashion side of it. They won't necessarily put together a look the way it was shown on the catwalk; it has a personal approach that I love.

Have you seen any particularly surprising outfits?

So many. I love when you see a runway piece of Prada mixed with something so oddball you would never see together if someone was being paid to wear Prada at a fashion event.

Which was the best party of London Fashion Week?

The LOVE Magazine party in partnership with The Muppets was a great one. They decorated an old-school Londonmember's club like it was a spaceship and all the barmen were wearing silver outfits and twerking. One of my friends was djing with Animal and Mrs Piggy was there - it was hilarious.

How do you decide what to wear to parties?

It depends if I have time to go home and change, which is rare. I dress for my mood, so sometimes that'll be three different outfits in a day. It's less about conforming to rules or situations and more about how I feel.

What's the relationship between fashion and music?

Again, there's so much crossover. I love working with musicians and pop stars because they've constructed a personality. You get to know so much more about a person when they're a musician because they're marketed as such. While character casting is becoming more of a thing with models, you're associating yourself with an entire image beyond visuals when you work with pop stars. The music someone listens to and the clothes they wear are intrinsically linked; the fashion world is massively influenced by the music world. For example, hip-hop and rap culture have always influenced fashion brands and vice versa. Now, there are very alpha men in the rap world who are into fashion and dressed in head-to-toe Gucci. I love that that's such a thing now.

How do you think fashion shapes a person's identity?

It's your billboard to the outside world. You get to tell everyone who you are without opening your mouth, and that's a powerful tool to have at your fingertips. Changing your outfit allows you to get a message across in so many different ways; you're creating a character.

Eclectic, schizophrenic, changeable. Some days I'll dress like a clown because I want attention, others I'll wear all black because I'm hungover.

How does your brand reflect that?

I describe it with personality traits rather than with visual attributes, fabrications or techniques. I think it's a personality, a tone and a sense of humour.

How will you spend your time between this collection and the next?

I just came back from Hong Kong where we opened a shop, and I have more trips planned for sourcing and production - I'm going to see the factories and launching all the new lines. After Christmas, it's pretty much full steam ahead again, though I'm hoping to go on holiday over New Year.

Any favourite places in Hong Kong?

I love going to the opera house for cocktails because the view is so good. I actually walked from my hotel to the peak and I still feel like I have sore legs. I feel like I have a Kardashian-sized bottom as a result because I was basically on a stair machine for two hours!

What does the future hold for House of Holland?

It's always been my dream to build a brand. I've never considered myself as a designer who is going into collection after collection; I've always thought about House of Holland in a much wider sense. I want to go into other areas and make it into a fully fledged lifestyle brand with various levels and categories.

How do you hope House of Holland contributes to the picture of fashion from our time?

I hope it injects a big dollop of fun. I describe the brand as a bit obnoxious, which is usually thought of being negative, but I mean it in a positive sense. We're unafraid, we're bold, we're brash, we're playful. This is us, like it or not. Take it or leave it.