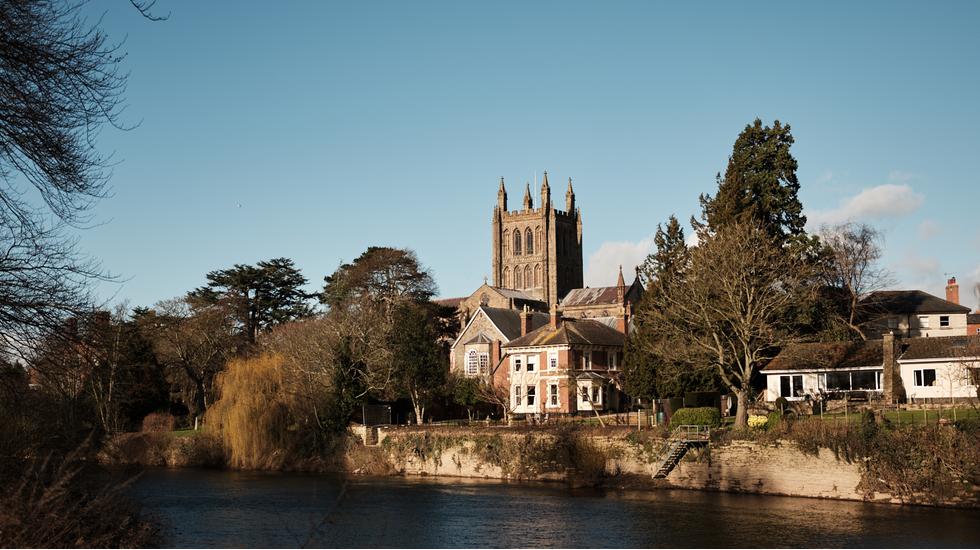 This article appears in Volume 36: Discovery.

Home Home to some of the UK's wildest landscapes and timeless black-timbered villages and towns, Herefordshire feels a world away from city life. Just three hours from London by train or car, this county has somehow humbly flown under the travel radar - despite the diverse array of fine produce, skilled makers and stylish hoteliers contributing to the scene.

That's not to say that this bucolic region, with two Areas of Outstanding Natural Beauty, in the Malvern Hills and Wye Valley, has been left undiscovered. Those in the know are charmed. Netflix producers have been setting up camp here since 2019 for coming-of-age comedy-drama Sex Education; the striking wooden chalet belonging to Gillian Anderson's character, Jean Milburn, sits above the handsome hamlet of Symonds Yat East.

But it's the county's urbane leanings that make it feel all the more special. The cathedral city of Hereford is packed with thriving restaurants and small shopping streets in its Independent Quarter. Nearby Chase Distillery is hailed as a pioneer of Britain's craft drinks movement, with world-renowned gin and vodka stemming from its Rosemaund Farm base. To the west, on the border of England and Wales, is the market town of Hay-on-Wye, which draws the great and good of the literary world for its annual Hay Festival. Then there's Ledbury, where locally owned stores line cobbled alleyways and Tudor houses double as artist studios, wine shops and delis.

A robust agricultural heritage has long kept the county busy, but there is a sense that Herefordshire is ready to take the spotlight. Younger farmers and landowners are pivoting from their traditional offerings in order to entice travellers seeking sustainability-led, design-driven experiences, taking farm-to-fork restaurants with rooms to the next level.

A long weekend of market town-hopping in Herefordshire, savouring the local ingredients and unearthing the rural retreats among lush, sheep-dotted fields, is one well spent. It feels as if the county is on the cusp of a new chapter as a great British getaway, but, also, that there's still time to explore it before the secret's out.

To find out more, head to visitherefordshire.co.uk

Spoil yourself and book top-of-the-line suite The Oakley, which has a four-poster bed, copper roll-top bath and floor-to-ceiling windows overlooking the farm.

The place to bed down on a budget after soaking up Hereford’s dining scene. The hotel is a stone’s throw away from the Independent Quarter and the city’s best restaurants. Its Offa Bar is a sumptuous nightcap spot with cocktails featuring spirits from Herefordshire producers, including White Heron Drinks, and fine wines from nearby Tanners merchants.

There’s something deeply satisfying about stumbling into a cosy courtyard bedroom after a sublime five-course tasting menu. Snap up one of the two here if you’re lucky enough to find availability.

When it isn’t being used as the Sex Education set, The Chalet is a five-bedroom holiday home with cinematic views of Wye Valley village Symonds Yat. Step out of the garden onto footpaths, cycle trails and the riverside, which offers wild swimming, canoeing and fishing.