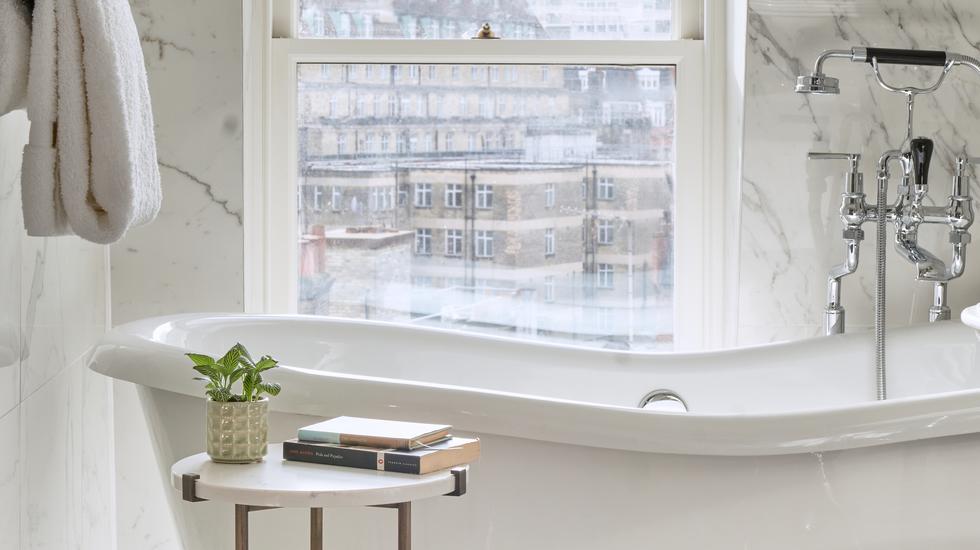 Could Could a name sound any smarter? We suspect not, but don't be fooled into thinking The Mayfair Townhouse is as stuffy as some of its neighbours. Zany design quirks, a colourful backstory and quick-to-smile staff set this daring W1 darling apart. We've earmarked it as the place to bed down for bright young things looking for somewhere to stay and play in London.

Guests are greeted in the lobby by an iridescent peacock adorned with 25,000 Swarovski crystals, setting the tone for a whimsical affair inspired by the bohemian crowd - Oscar Wilde, Alfred Lord Tennyson, Ernest Hemingway et al. You'll then clock the off-the-wall modern art before being ushered into The Dandy Bar, where you'll catch a glint of the fox insignia on the bartender's golden buttons. The hotel's mascot, it's a symbol of both mischief and wisdom - you'll notice nods to this around the hotel, including brass fox heads on bedroom doors.

You'd be forgiven for assuming The Mayfair Townhouse is an up-and-coming venture from some new kids on the block. Oh no. Beneath the eclecticism and flair you'll find good stock - the property counts Chewton Glen, Cliveden House and The Lygon Arms among its siblings in the Iconic Luxury Hotels group. A refreshing addition to the capital's hotel scene, we're already wondering what they'll pull out of the hat next.

We've slept in a lot of hotel beds. And we mean a lot. Yet we're not sure we've ever slept in a bed as big or as comfortable as ours at The Townhouse. Our booking was for a Green Park suite - rooms range from cabins to a two-bedroom loft, though we think the garden suites are our favourite - but we popped our head into a "cabin" and can assure you that solo travellers will not be disappointed; they look just as cushty.

Bathrooms are a real winner here. Our tub would fit Goliath (we had to sit in it widthwise to stay put), while a powerful rain shower and ultra-luxe products aren't far off a spa experience.

We feel quite strongly that if you're staying in a fancy hotel, you should have breakfast in bed, so that's exactly what we did. It was good, though the portions were rather meagre; we're quite sure that if we'd trotted down to the basement dining room, we could've filled our boots with breakfast items galore, however.

An unfussy, classic menu does the trick: tuna tartare, burgers and lobster curry are all brilliant. It is somewhat surprising, though, that the sprawling dining room isn't used beyond breakfast - you'll be eating in the twinkling ground-floor bar.

The Dandy Bar's imaginative creations are mixed by sparkly-eyed staff who are committed to making sure you have a really good time. Settle in for a late one.

There are plenty of meeting rooms and quiet corners for you to conduct your business in. The hotel is also pet-friendly, providing beds, bowls, meals and treats.

What about their eco-credentials?

Iconic Luxury Hotels has an extensive green policy, which includes environmental initiatives alongside corporate responsibility and giving back to the community.

There are rooms with wheelchair access and lifts throughout the hotel.

Within a short walk you can find…

Some of London's best-known bits, including Bond Street, Soho and Green Park.