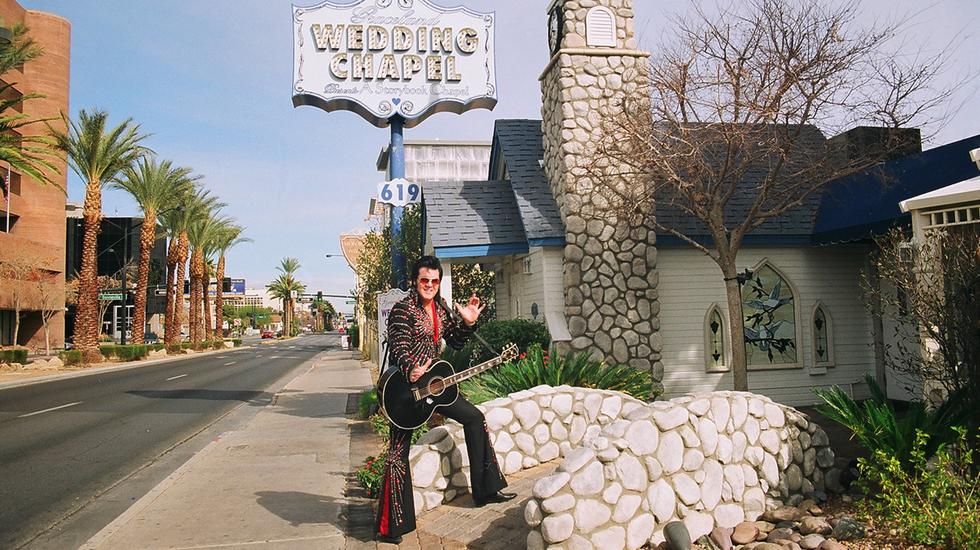 The The Elvis on duty on the day that I visit Graceland Chapel in Downtown Las Vegas is just one of a troupe of Presley impersonators that marry thousands of couples each year. Donning an open-neck black jumpsuit with red rhinestones and a pair of aviators, he croons over his guitar and tells me that he started out in the impersonation game 19 years ago, almost by accident: "I originally trained as an actor and used to jam with Johnny Depp's band in L.A." Depp the musician might have fallen by the wayside, but Depp the actor made a reappearance in Brandon's life under the alias of Hunter S. Thompson, when filming for Fear and Loathing in Las Vegas brought the actor to Graceland. Yet perhaps the most important star to have paid this quaint Downtown venue a visit was the King of Rock 'n' Roll himself...

Gretna Green Chapel, named after the Scottish border village famous for runaway weddings, was established in 1947 by a couple that had emigrated from Scotland to Nevada. And 20 years later, Elvis Presley stumbled across the venue whilst looking for somewhere to marry Priscilla Wagner. With his blessing, the chapel was renamed Graceland after Elvis' Memphis home. From humble beginnings, this old-school chapel hosted 8,500 weddings in 2014 and its bustling reception wall is covered with photos of famous couples that have exchanged vows here.

In 1989 Jon Bon Jovi tied the knot and then played an impromptu concert in the chapel's car park. He returned years later to walk one of his biggest fans, who had just lost her father, down the aisle. "We've witnessed some very touching moments here at Graceland," says the chapel's general manager, Brandon Reed. "We had a young bride from Gaza and a groom from Israel come and get married here, and it was like modern day Romeo and Juliet story. But then we've also had a young guy come to marry his motorbike, and an elderly lady who got married to an Elvis impersonator, by an Elvis impersonator. We've had have all sorts."

Vegas has garnered a reputation for ushering wasted couples down the aisle, but Brandon assures me that the vast majority of the chapel's ceremonies are traditional and planned months in advance. "The number one reason people get married here is that the cost of weddings is low. Secondly, Vegas takes care of your guests for you; there's so much variety that you don't need to worry about keeping family members entertained. And then there's also the relaxed marriage laws." On that final note, Brandon proceeds to tell me that Graceland offers transport for couples to the Marriage Licence Bureau to verify their vows in one of two 1967 pink Cadillacs. Just to make sure that what happens in Vegas stays legal in Vegas, and that what happens in Graceland stays true to its old-school swag.