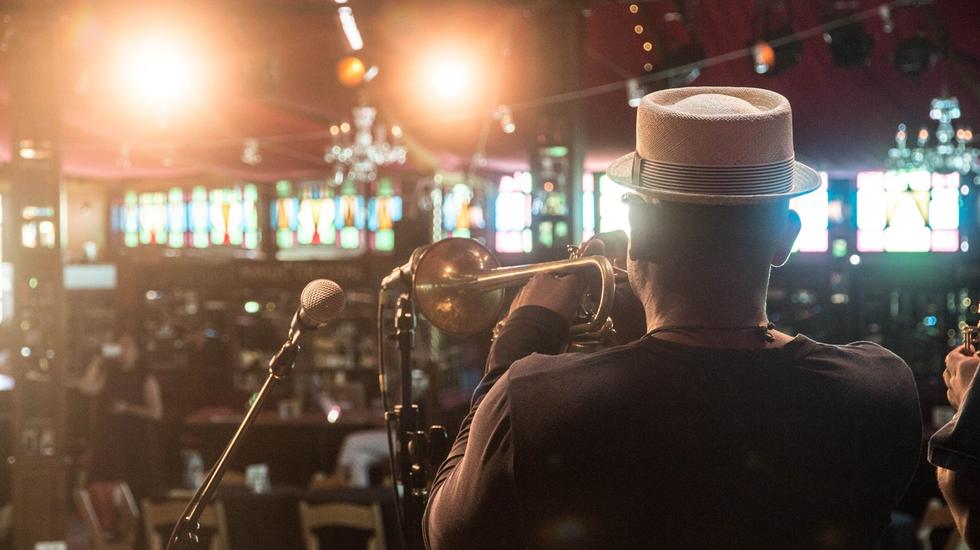 Your Your grandparents loved it. You pretend to know about it. But for most, it really is just "all that (slightly repetitive) jazz." Unsurprising then that sales of jazz account for just 1.4 per cent of US music market share, falling behind even children's music. But despite record lows jazz in New York is as vibrant as ever, with a host of musicians pushing musical boundaries and broadening our expectations.

Due to the increasing demand for more mainstream music, the New York jazz scene is as small as the city's best jazz venues. The life of a musician might be as spontaneous as its score, but it is hardly as glamorous, as artists are forced to chop and change between at least three bands in order to fund a living. With such a hectic lifestyle, jam sessions are as rare as a seat on the subway and with so many talented 'cats' prowling the tight circuit, the stakes are high and the fare is low. There are no nine lives in New York.

The benefits of such chaos are reaped by the listener. In order to distinguish their own original sound, artists are forced to constantly reinvent their music to re-engage their audiences. SYOTOS (an acronym coined by Chris Washburne, meaning See You On The Other Side) one of the longest standing jazz groups in New York, have knocked the stereotype of jazz as a genre for elderly late-night drinkers. The group mixes Afro-Latin jazz with Acrid Rock, or what they call Acid Mambo: "Think Duke Ellington on a psychedelic trip," says Chris, the band's leader. Unlikely pairings include Duke Ellington's sacred work Heaven with Led Zeppelin's 1971 Stairway to Heaven. According to Washburne, SYOTOS is keeping the vital tradition of jazz alive by pushing boundaries.

It is not just older jazz musicians who are engaged in the struggle to keep jazz relevant in today's world of music for the masses. Etienne Charles, the coolest 'cat' around town, is rarely seen without his trilby (let alone his trumpet) and considers art and culture as "the soul of any society". Charles has followed his own cultural roots to Trinidad by tapping into the energy of Creole music. His mixture of calypso rhythms and Haitian voodoo music brings the island heat and excitement to bear on the smoothness of jazz.

Equally young and talented, 24-year-old Adam Larson has traced the origins of jazz, touring the Democratic Republic of Congo, Ghana and Senegal. "Working with traditional percussionists was the highlight, especially those musicians who played the talking drum," says Larson. For him, the constantly evolving exploration of jazz is a two-way street that collapses cultural boundaries both within America and outside of the country.

Despite the evolution of jazz, it is still a genre too often associated with hotel lobbies from days gone by. But there is arguably no better escape from the late-summer heat of New York than into this hidden underground world. The venues may sometimes be seedy, but the rich notes of a saxophone can convert any dive. And with so many musicians changing the definition of jazz, who knows where it will take you?

SUITCASE has spoken to some of the best musicians in New York and compiled their list of the best places around the world to listen to the shifting identity of jazz. So, get your finger on the pulse.

Favourite jazz venue: Left Alone, Ashiya, Japan "I played at Left Alone in 2008 on a tour. I remember the wooden beams in the interior being very cool and the sound was great because of it. The food was delicious too."

Favourite jazz venue: +233, Ghana "The venue is named after the area code in Accra and is rooted in local culture. The rhythmic roots of jazz come from Africa, and this is a place you can really hear them."

Favourite jazz venue: Bimhuis, Amsterdam "This a new and well-designed jazz club with amazing acoustics in a fantastic city."

Favourite jazz venue: Ronnie Scott's, London "Ronnie Scott's is a room with the musical intensity of New York City, but with the vibe and culture of a British Club."

Favourite jazz venue: Body & Soul, Tokyo "Body & Soul is not as glitzy and glamorous as the bigger clubs like Blue Note Tokyo or the Cotton Club, but Body & Soul has history. It is tiny too - the audience is seated next to the band, so it's a very intimate experience. The crowds are fantastic - last time we played we did three encores!"

Favourite jazz venue: Porgy & Bess, Vienna "So many jazz clubs are literally underground and most feel like basements - dingy, moist, dark rooms with poles in random places. But Porgy & Bess is pretty fly, very aesthetically created. They treat the musicians well and host the most of the international jazz acts coming through Vienna, the big names are always there!"

Words and Photos by Alice Fane