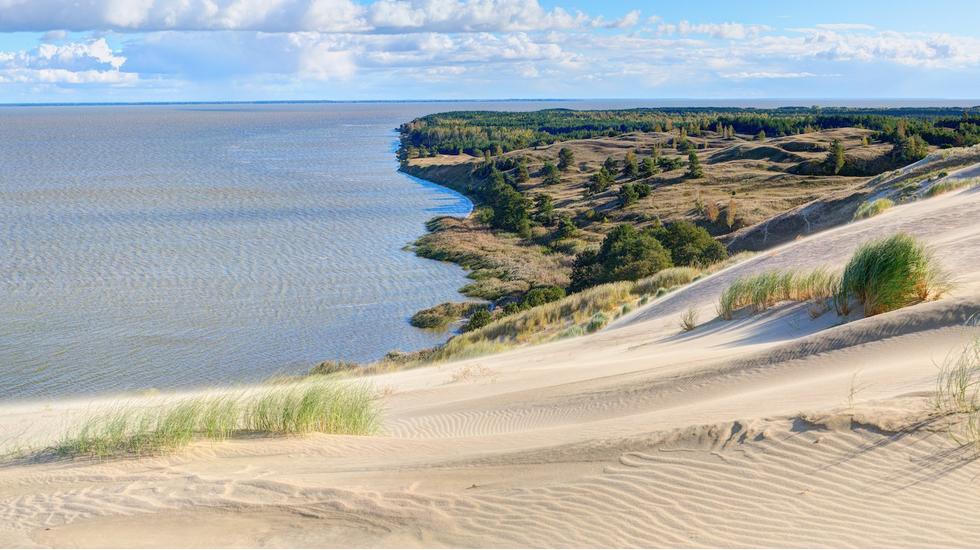 A journey across the long, sandy Curonian Spit to Kaliningrad reveals a patchwork city defined by its Prussian heritage, by its more recent Soviet past and by its relationship with - and distinction from - the Motherland, Russia.

"It can take anywhere between a few minutes and a whole day," says our guide Eduard. He's referring to the time it takes to cross the border from Lithuania to the Russian enclave of Kaliningrad, where we're stood outside passport control waiting anxiously for the guard to summon us.

We're halfway along the Curonian Spit, a thin, 98km-long sandy strip formed by the Baltic winds and waves that buffet its western coast and an inland lagoon to the east. Below the waters, centuries-old pine-tree roots anchor the curved dune.

Following the success of the 2018 World Cup, Russia introduced the e-visa in July 2019, making it easier for citizens of just about every country apart from the UK and US to visit Kaliningrad. "It's designed to keep the enemy out," adds Eduard. I can't tell if he's joking from his deadpan expression.

Inside the passport control office, it's like the Cold War had never ended. Motioned into a dingy room, we file towards a kiosk, from which a pair of beady eyes peers out from the dark interior.

Handing over my passport, the eyes study my every move, flicking between my face and my visa document. I'm now sweating profusely, but just as it crosses my mind that I might ushered into a dark room for questioning, the guard slams down his stamp on my passport and pushes it back across the counter. Trooping back onto the bus under the watchful gaze of a guard dog and their handler, the barrier rises and we enter Russia.

We continue along the forested corridor where, a few miles down the road, the vertiginous 55m Vysota Efa dune marks our first stop. We can barely move because of the coach-loads of tourists from so-called "big Russia" taking selfies. From here views stretch off in the distance; the rippling ribbon of sand gives way to forest and fields and the Baltic beyond. It's spectacular.

We venture farther along the spit, stopping at the eerie Dancing Forest, named for its thicket of strange twisted pine trees. Various theories surrounding its origins abound. One story goes that Nazi soldiers poisoned the soil before they fled; another that the twisted trunks are warped by a geo-magnetic force.

Our last stop-off on the Spit is the Rybachy Biological Station. It was first established in the late 19th century as the Rossitten Bird Observatory, when Kaliningrad was part of East Prussia and German ornithologist Johannes Thienemann wanted to track bird movements. Having survived decades of political change - operating through the days of Gorbachev and Yeltsin to the present-day rule of Vladimir Putin - it remains one of Europe's most important centres for studying bird migration. On average some 50,000 birds are captured here every year and tagged with a code and a number to call, before being released to continue their journey south.

When we leave the Spit in Kaliningrad, the scenery doesn't immediately differ that much to Lithuania. Yet as we venture further inland towards the capital (also known as Kaliningrad) the sands give way to a curious collage of medieval Prussian buildings and brutalist Soviet architecture.

While Kaliningrad was named after one of Stalin's henchmen, Mikhail Kalinin, the city's roots stretch back to the mid-13th century when Königsberg (as it was then known) was formed by the Knights of the Teutonic Order. To this day, Kaliningrad wears this history with pride.

Three hundred miles west from the Motherland, sandwiched between Lithuania, Poland and the Baltic Sea, this 15,000sq km Russian strategic foothold is about as far removed from Moscow as you can get - bar a few Soviet monuments, at least. Sure, it's got the same grey concrete high-rise edifices and chaotic six-lane traffic systems, but - owing to bombing in the Second World War when the city was razed - Kaliningrad is also home to a mishmash of lovingly reconstructed German landmarks.

Red-brick towers such as the Brandenburg Gate guard the city walls while the gothic Königsberg Cathedral marks the resting place of 18th-century philosopher Immanuel Kant. By contrast, there are imposing, 70s Soviet-style buildings too, the most notable of which is the cube-shaped House of Soviets that seems to watch over the city. Once spruced up for a visit by Putin, this monolith has since fallen into disrepair; weeds poke out of the concrete and all but a few windows are smashed.

It feels as if, across Kaliningrad, the effect of Communism is inescapable. Even the charming, cobbled fishing village quarter is flanked by dreary Brezhnev-era high-rise apartment blocks. Wandering along the Pregolya River to the industrial port, we discover an array of ex-Soviet navy vessels, scientific research boats and a submarine moored up to the dock.

The Museum of the World Ocean is also here, inside which we admire an early model deep-sea submersible and an adult sperm whale's skeleton. We stroll across Victory Square, dominated by the golden-domed Cathedral of Christ the Saviour, to the Cosmonaut Memorial, which pays homage to local space heroes Alexei Leonov, Yury Romanenko and Viktor Patsayev.

Dodging the plentiful amber stalls dotted around the city, we make our way back to the centre, where the bunker museum marks the place to which German generals retreated as the Soviets moved in during the last days of the war. It's tucked away in a residential area off the main street, Lenin Avenue, but the anti-aircraft gun outside is unmissable. Underground, the bunker showcases a collection of well-preserved artefacts from WWII that tell the story of Nazi occupation, while propaganda videos playing on a loop focus on the Soviet liberation.

The only way out of Kaliningrad by rail is to mainland Russia and the big clock outside the station, steadfastly set to Moscow time is a reminder that the Motherland is never far away.