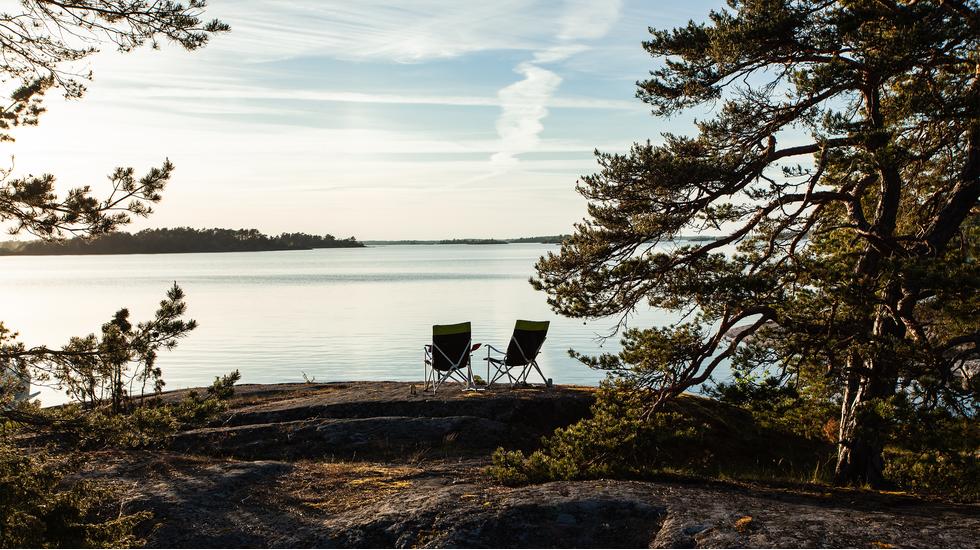 Pushing Pushing our two-man kayak into the sea, Thomas waves us off with a "see you on Sunday!" - and just like that, I'm free. Free from digital screens, from a schedule, from the 21st century. For the next three nights I have no fixed plans, only a map and compass, a couple of cool bags stuffed with groceries, a tent and a brand-new companion, photographer Jacob. We have just two tasks for the next four days: to make it to the pick-up point 13.5 nautical miles away, and to have fun doing so.

I can't quite believe that we're being trusted with all this expensive gear - as well as our own lives - after a mere two-hour briefing with Thomas, during which he goes over the basics of kayaking, map-compass navigation and how to work our Trangia stove. The founder of Swedish adventure company Do The North, Thomas is on a mission to get city dwellers out into the wild by proving that it doesn't take six months off work and thousands of pounds to have an adventure.

Despite being a city girl, I pride myself on being fairly feral and I've always adored camping. It's the prep and planning that puts me off - the borrowing of tents, the booking of busy campsites, the night-before-you-fly panic about where you put your head torch after last year's Bestival. What Thomas does is take this hassle out of the equation. All our gear, from those elusive head torches to sleeping mats and raincoats, is waiting for us when we touch down at Stockholm Skavsta Airport where Thomas scoops us up, drives us to our pre-loaded kayak and shoves us into the wilderness.

Jacob and I have nothing to do but paddle slowly through the Sankt Anna archipelago in the summer heat, stopping on a convenient island when we get hungry or claiming one for the night when it's time to pitch our tent on the mossy rocks. Thanks to Sweden's enviable Right of Public Access laws, it's legal to camp on these privately owned islands as long as we keep a polite distance away from any summer houses or jetties.

Winging it - sorry, "learning as we go" - is both fun and thrilling. During our first hour at sea we see an island signposted "Kabel" and hunt in vain for Kabel on the map, until we spy a few other Kabel islands and realise it's a warning sign for underwater power cables. The trick to map-and-compass kayaking navigation, we discover, is to know where we're going from the outset. If we paddle blindly it's almost impossible to work out where we are - from the sea each one of these 6,000 islands looks the same so we have a one in 6,000 chance of being right. However we soon suss it out and the similarity and proximity of all these tiny islands swiftly becomes soothing and meditative.

On our first night we drag our kayaks onto the rocks of the prettiest island we can see. We'd feel like the luckiest people on the planet, if we didn't also feel like the only people on the planet. The silence and solitude casts a powerful spell and suddenly we find ourselves living like refined cave people. We eat out of plastic buckets like ravenous animals and I'm reminded of a time as a student when, disgusted by the state of the sink and most of the crockery in my grim shared flat, I ate everything out of a gigantic Sports Direct mug that I kept in my room and washed in the bathroom sink. Here among the islands I get a kick out of doing the dishes squatting on a rock at the water's edge, using a handful of sea kelp as a scouring pad.

Jacob and I may have gone feral but we never feel unsafe or uncomfortable. The Swedish archipelago is almost eerily pristine and as tame as wilderness comes - during the summer months there aren't even any unruly waves to rock the boat. It's also safe - Thomas laughs off our concerns about abandoning our kayaks loaded with our Hilleberg tent and all our food supplies.

We stop whenever we spy flat rocks suitable for sunbathing on and basking becomes a big part of our daily routine. We happily lose our sense of time and let nature be the boss, waking us up and lulling us to sleep and allowing our stomachs to tell us when to eat. On our second afternoon we find a flat island dotted with sophisticated summer houses where large motorboats cruise past, giving us a taste of how well-heeled Swedes do the archipelago. We quickly adopt a simple routine of stopping for mid-morning "fika" of coffee, dark rye bread, avocado and smoked salmon, paddling for around five hours a day and punctuating our evening with a swig of snaps, the potent Swedish spirit which I love but which Jacob describes as "different flavours of hand sanitiser".

We master the art of positioning ourselves on the side of an island to give us a clear, uninterrupted view of the sunset - in the absence of Netflix it's the show we don't want to miss. During the Swedish summer months the sunset is languorous and civilised, enabling us to take it slow as we set up camp for the night and grill salmon steaks on our tiny gas stove. When the sun takes four hours to sink into the sea, light only succumbing to darkness at around 11.30pm, there is no need to rush. We watch the sun turn fiery and disappear from the comfort of our sleeping bags.

Taking a screen break is important to me because a few weeks prior I'd been furiously promoting my travel memoir across social media. By the end of this work flurry I was a complete slave to my devices - lusting after likes, ears pricked for the ping of a notification, thumbs twitching to check Facebook, Twitter and Instagram every few minutes.

Here among the islands, with my phone under my bed back home, I feel like a triumphant runaway. In fact Jacob is rarely without 4G signal but I crave the disconnect and he keeps his phone away from me, permitting me the luxury of "one Google per day" over breakfast. I ask big questions that I'd pondered the entire day before. Are AeroPress coffee makers and Aerobie frisbees made by the same manufacturer? (Yes.) Did my home country of Ireland vote to repeal the 8th amendment extending abortion rights? (YES.) Why do all Swedes paint their houses the same shade of red? (Falu red was once used to mimic European redbrick architecture and became ubiquitous when it was found to have protective qualities - plus it's a bugger to paint over.) Information becomes a rare treat rather than an overload.

Our daily routine is slowed down, streamlined and simplified, the days reduced to basic functions like cooking, building shelter, playing in the water and drinking as the sun goes down. Our relationship with stuff also subtly shifts - there's something special about being entirely self-sufficient, with everything we see having a purpose. In the absence of the clutter of our normal lives we also cherish each other more - reliable, funny travel companions are a precious thing.

On our final night we get a tiny taste of civilisation on the fishing island of Håskö, sipping snaps with a family who has lived here for four generations, watching a grandfather mend his nets and lusting after a fantasy life here for ourselves. Before we set off, my whirring, FOMO-addled city brain was obsessed with finding "the best islands" and fearing how far we needed to paddle each day. Now these thoughts make no sense to me. What does make sense is the freedom to go at our own pace. In a world hooked on speed and information, this slowness is the true luxury.

A self-guided sea kayaking trip on the Swedish archipelago with Do The North can be booked through the travel and experience marketplace Fixers from £599 per person, including transfers and all equipment.