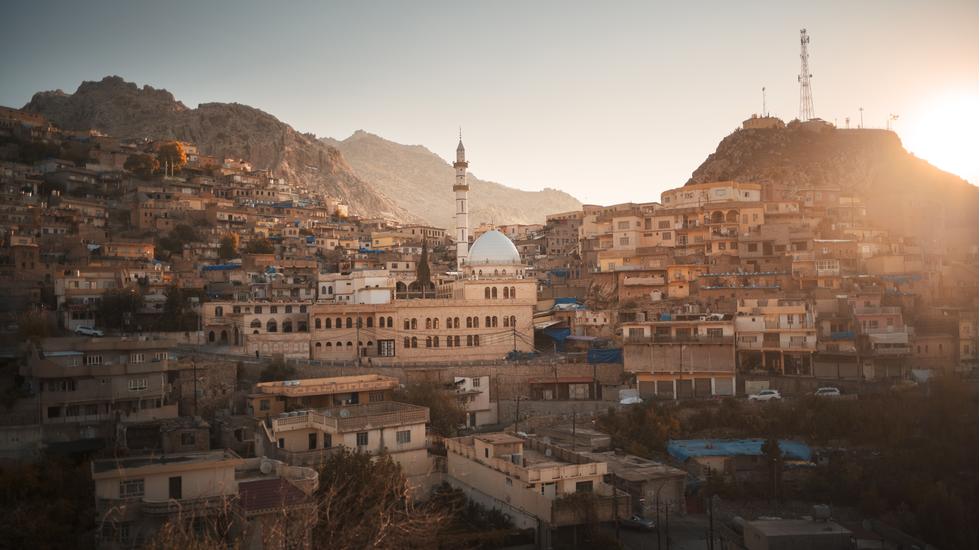 The articles appears in Vol. 31: The Freedom Issue.

It's It's dawn in Akre, an ancient town hoisted against a mountainside and encircled by sun-soaked sage grasslands. I'm being ushered from the main square towards an entanglement of walkways through the bazaar, and I'm not alone. Carts loaded with apples, dates and parsley, under which dozing cats rest, are heaved into position as the first distant sounds of motorbike horns flare. Smoke flees from roadside tea shops teeming with aged men and ashtrays, while young boys hurry past me laden with stacks of freshly baked bread. Led by Laween, my Kurdish-Syrian guide, and my hungry stomach, we enter a delightfully small restaurant discreetly carved into the bazaar, fit only for ten or so visitors. Our beaming host carries a tray of piping-hot sugared tea as he stumbles across a floor littered with crushed walnut shells. He is followed by a younger man who covers our table with fresh bread, wild honey, cheese and tahini as an audience of elderly moustached men look on from the narrow doorway, cigarettes lolling from their mouths. This is the start of our walking journey across the Kurdistan Region of Iraq. After all, only good can come from a large breakfast at the beginning of a day's walking.

Until recently I had never thought of myself as a walker, but rather as someone who liked to take a walk. My gentle excursions through the depths of the English countryside have mostly been in solitude, punctuated only by extended breaks and by getting agreeably lost in and among woodland and lakesides for many miles at a time. As a photojournalist, though, I have been expected to walk. Most memorably I walked the world's largest annual pilgrimage, Arbae'en, through Iraq in 2017 and 2018. It was there that I met my partner Leon McCarron, a man who has singularly made a living from simply walking - or as he puts it, "human-powered journeys". He fondly told me about the mystical northerly reaches of Iraq and his longing to walk there again with me. And so, presented with the opportunity and with Leon's encouragement, I found myself walking from west to east across the Kurdistan Region of Iraq at the end of 2019.

Today there are over 25 million Kurds across Syria, Turkey, Iran and Iraq, a fifth of whom live in Iraq. After the fall of Saddam Hussain in 2003, Kurds were granted an opportunity to establish control over their mountainous territory, which exists in the autonomous locality of Iraq. Driven by oil-fuelled optimism, they transformed the region, building shopping malls, skyscrapers, bars and even a ski resort. The youth still remain optimistic about the future their forefathers fought for now that there is relative stability and security has returned to the area. The Kurdish region has been bombed, evacuated and resurrected, a site of displacement for hundreds of years as well as a place of trauma, newly ploughed land and intangible hope. Presently the greatest threat facing the region is not conflict, as many are led to believe, but rather globalisation. More than ever, traditions and heritage are on the verge of collapse - and these are the very things that walking trails seek to protect.

Over the past two years the Abraham Path Initiative, an NGO based out of Harvard, has carved the first cross- cultural long-distance walking trail, which sweeps from the west to the east of Iraqi-Kurdistan. It believes that by building cultural capital in rural communities, the path will encourage economic development and further peace-building. I have also witnessed the desire to experience meaningful, authentic trips to places that few have gone before becoming an increasing trend in global tourism. The trail requires a large group of collaborators to make this possible. From drivers and translators to guides, mine advisors, guest house owners and local restaurants, the trail offers an in-depth understanding of not only the landscape, but also its culture and history as told by locals.

In the war, I was walking during a dictatorship and in a place of pain. Now when I walk, I walk without the pain. It's heaven.

We follow the walkways of Neanderthals alongside shepherds in the meadow grass lowlands and along humble tributaries leading to the Great Zab River, towards the ancient Assyrian hilltop town of Amedi. We travel on foot with Yazidi pilgrims towards the mountain valley temple of Lalish, the holiest site for the Yazidi faith, and wander down roads built by Saddam Hussein. Later on as part of an assignment, I walk inch by inch with de-miners from Mines Advisory Group, which is restoring the land and saving lives in a country that has more than eight million active landmines lying ominously only inches below the soil. As a photographer one has to move slowly enough to encounter chance and to see the world fully and with clarity. This is what walking allows; the opportunity to be humbled, to better understand the world and to be questioning. It's about the spaces in-between, rather than the walk itself.

Until I met Ahmed, I'd never been taught to walk. I never knew there was more than one way to move your legs. Ahmed is part of the Peshmerga military, which literally translates to "those who face death", and lives in the most easterly snow-capped point of the Kurdistan Region of Iraq. At almost 70 years old, Ahmed walks as though carried by the wind and held by the mountains that surround us. I, on the other hand, feel as though my limbsarerootedinthesoilasweclimbhigher.Hetells me with handfuls of hopeful words and encouragement, "Swing your arms, lean, follow me! You're a proud walker, Emily. A great walker."

Ahmed's story is one of sacrifice and, I learn as I continue to walk over the following weeks, one sadly shared by all who live here. These tales lace the trails and are part of the very fabric of the land. The day after Ahmed and his wife Fatemah married, the war began. They hid in a cave only minutes from their family home for a month, which we visit during the midday heat. We only intend to stop at his house for tea, but unsurprisingly Fatemah has prepared a feast for us. Mountains of fresh salads and pomegranate molasses lie on a thick tapestry rug alongside chickpea soup, dates and hand-made bread. I turn to Ahmed and ask what it means to him to walk. "In the war, I was walking during a dictatorship and in a place of pain. Now when I walk, I walk without the pain. It's heaven. How could this not be heaven? Before, we had no right to breathe, but now we're free. Imagine, at the top of this mountain, where we're walking, was an Iraqi military base. Now you see they're free. The mountains are free, and we sacrificed our blood to be free. I sacrificed my blood. And here I am, walking again."

This isn't my only encounter with the Peshmerga. Nights later, we enter a small village suspended like a luminous jewel among the Zagros mountains. I'm led barefoot into a narrow sitting room, seemingly fumigated with men's cologne and cigarette smoke and lined with the obligatory part-peeling, part-squeaking faux-leather sofas that are found in all Kurdish households. I'd come to understand that upon entering one of these rooms, you would be expected to stay with your hosts for a minimum of two hours, consume plenty of black tea, and be routinely offered plates of fruit and cigarettes. It's a rite of passage and one I have learned to speed up over the years, usually by hurrying into the women's quarters with a camera. This evening, however, I stay seated. Lit by a single naked bulb and a large TV screen churning out dramatic Kurdish music videos, a smiling Peshmerga general looks out from his large desk. "Welcome to Kurdistan! We are so glad to see you here in this beautiful land; a land made for walking! Please, join us for dinner!" It's then I notice the bleating sheep through the window nearest to me have disappeared. Only the rope remains. Hours later, mutton is on the menu for our evening meal. The power cuts and we're lit by the orange glow of gas heaters and phone lights dancing as their owners shuffle across the floor seeking out food. We sleep in modest rooms that evening, as we do most nights, and I think deeply about how impactful simply walking is, both for myself and for those living along the trail.

It's not just the military who encourage walking, but the youth too. Every weekend thousands of young Kurds take to the hillsides for hiking trips. Arez, a mechanic during the week and mountaineer at the weekend, is one such individual. "The outdoors plays a huge role in surviving tough situations. I lost a lot of dreams when I left Baghdad, as well as friends and family. I was working at least two jobs from the age of 16 and studying all the while. I had to survive to handle these situations. I think the outdoors was the escape - the mountains gave me purpose. It's like a free therapist. When I'm at the top of a mountain, I think about nothing. I feel reborn and prepared for life."

I personally came to Kurdistan bruised from years of working in the field. In many ways, I sought safety in a land that has been bruised and beaten too. I found an affinity with its walkways and mountainsides. The landscape and people healed me and restored my faith in humanity. More simply, I realised that a lot of good can be done by a walk, a large breakfast and the company of kind strangers. As a photojournalist, I often find myself in strange and seemingly disconnected scenarios around the globe, but each is connected by walking and the people I meet along the way. How very familiar it is to embed myself within a family, to experience a temporary inclusion, a home, a site of love, and then to disappear.

For the first time, in Kurdistan I felt compelled to stay - and so at the end of 2019 I moved to the city of Erbil in the heart of Iraqi Kurdistan. Still, it is my job to be a familiar stranger, to suck out people's poison and meet their inner child, peering from behind their ribcage in all its imperfect perfection. I am both a keeper of secrets and a teller of stories, who, for now at least, can be found hiking in the Kurdish countryside at weekends.

At this time of immense uncertainty and new global order, one can only hope that old barriers and misconceptions break down and that we open the way for new forms of travel. It is time for other regions and countries to take their rightful place as desirable destinations. We must move beyond closed borders and narrow minds to a more accepting global society. Sometimes it takes a monumental crisis to see what we value, want and need - but perhaps the answer lies right beneath our feet.

For more information about the Abraham Path Initiative, visit abrahampath.org

To discover more of Emily Garthwaite's work, go to emilygarthwaite.com