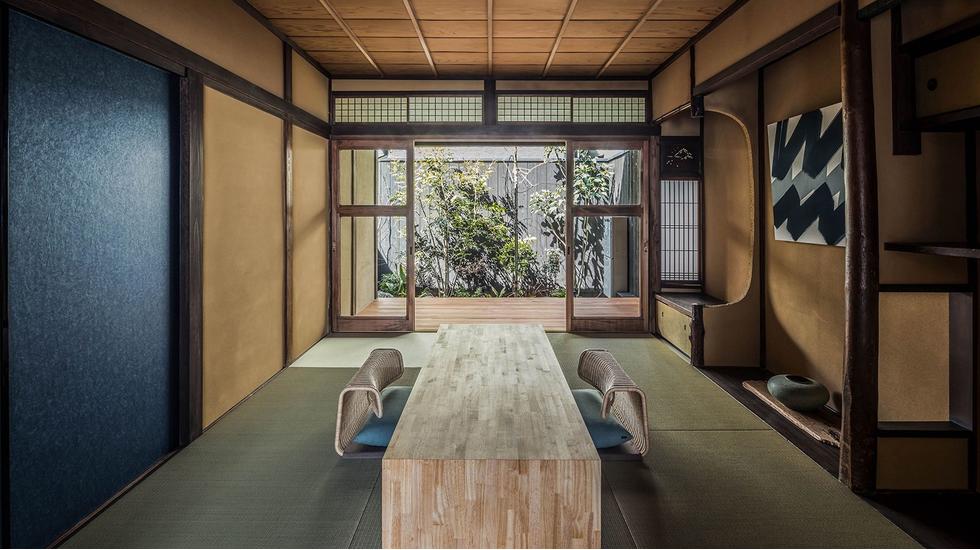 In the wake of the 2011 earthquake and tsunami, many of Tokyo's creatives relocated to Kyoto, bringing with them an influx of modern ideas and concepts. As past and present collide, Japan's so-called "thousand-year capital" is booming.

For centuries, Kyoto has been a highly respected cultural constant within Japan. It's a beautiful city, a hub of incredible artisans, the birthplace of the tea ceremony and home to a wealth of traditions that haven't changed in generations. In recent years, the past and future have collided here, and a balance has been struck between modern minimalist design and traditional tastes - the resulting atmosphere is uniquely "Kyoto" and effortlessly cool.

Set on Honshu, the main body of the Japanese archipelago which comprises more than 6,000 islands, Kyoto is the country's ancient capital - its name literally translates as "Capital City". Surrounded by lush green mountains on three sides, it teems with a rich history of culture and craftsmanship. The mere mention of "Kyoto" arouses images of centuries-old temples, teahouses and narrow winding streets lined with machiya (traditional wooden townhouses), the sound of koto (harps-like instruments) drifting from open windows while geishas float along below, their wooden geta sandals quietly clicking against the haphazard stone streets.

Kyoto is lucky. In a country born from fire and brimstone, and in which volcanoes and earthquakes have had a marked impact on the everyday rhythm of life, her 1,225 year history has been relatively free from any major natural disaster. Her beauty and ancient architecture mark a geographical safe haven.

Large swathes of the country have not been so lucky. In 2011 there was a magnitude seven earthquake and subsequent tsunami in the Tohoku region, north of Tokyo. The surrounds were hard hit by the effects, both of the initial quake and the large aftershocks, that saw damage mounting into the billions of dollars.

Joanne Laporte, a designer who creates bespoke bags from vintage obi belts, was in Tokyo when the earthquake struck. "The city was in shock. The earthquake highlighted our vulnerability to nature that I've never experienced before. Everyday life was put on hold, businesses were without electricity, the big screens, like those in Shibuya Crossing, were continually rolling names of the missing. It was so sad."

She continues: "An unsettling feeling swept through the city. The morning after the earthquake, my husband and I took our dog and left on the first train to Kyoto for some respite. When I arrived, I was so conscious of the surrounding city. I remember the moment I knew I could live here, sitting on the banks of the river, staring at the ink-blue mountains in the distance. It felt like home."

The earthquake prompted an exodus to some degree. It forced many creative Tokyoites to rethink their metropolitan lives and relocate to smaller, safer city living in Kyoto, taking with them an influx of modern ideas and concepts. It set into motion a shift towards a more dynamic urban scene.

The opening of Japan's first craft gin distillery is proof to that end. Using local, hand-sourced ingredients from farms in Kyoto Prefecture, The Kyoto Distillery has won numerous awards for its flagship Ki No Bi gin as well as a number of innovative limited bottlings (some of the most sought after on the global market) including champagne cask-aged gin. Head distiller Alex Davies is inspired by the harmony of Kyoto. "We took our insight from every corner of the city, respecting the incredible traditions here but adding something never seen before."

"Kaiseki was a big part of that," he adds. "We studied the way that chefs would harmonise a few incredibly high-quality ingredients to create a minimalist masterpiece on the plate, allowing each constituent flavour to shine through. Ingredients are not thrown together, everything is subtle, restrained but beautiful. We wanted to take those principles and run with them when creating our gin."

The Kyoto Distillery has also worked alongside tea producer Hori Schichimeien to create a bespoke blend of gyokuro tea a prized and expensive leaf that's famous in Kyoto. "We took inspiration from the experts," continues Davies. "We saw the detail and artistry, the years of tradition, and we learnt from it. We adapted our distillation to embrace a legacy that is hundreds of years old, while hand-crafting it into something new."

The distillery is only one part of the thriving subculture of independent brands, businesses and boutiques that have established themselves in the city, each respecting the heritage of Old Japan, while embracing the new. Kyoto's quietly cool and connected inhabitants don't follow trends, however. Everything here is considered, and to that end the vibe is an easy elegance edged with an aura of the avant-garde.

It's a testament to Kyoto's cool that the Ace Group has bypassed Tokyo, settling in an old telephone exchange building in the heart of downtown Kyoto for its first foray into Japan's buzzing inbound tourism industry. Set in the dynamic heart of Kyoto, the building has been overhauled by the architect Kengo Kuma and is set to open in spring 2020.

Full immersion into the Kyoto experience can also be found through a stay in one of the city's machiya residences. These wooden townhouses have long opened their doors to guests for an insight into traditional Kyoto living. Maana, a home set on a quiet residential street in the Tambaguchi area, is a wonderful base from which to explore the city. Inside, the design is considered, with a minimal ikebana flower arrangement in the entrance and a handcrafted Shigaraki ceramic bathtub overlooking the tranquil garden. Owners and former designers, Hana Tsukamoto and Irene Chang, were inspired by Kyoto's simple but meaningful way of life and worked with acclaimed Kyoto architect Shigenori Uoya to renovate the 100-year-old house. Maana not only merges modern luxuries with traditional curiosities, but has ensured the survival of a piece of Kyoto's heritage, at a time when many of the city's machiya are falling into disrepair.

In a city where tea is so ingrained in the culture, it might be a surprise that the coffee scene in Kyoto is a feast for the palate. New cafés in among the city's most famous sights are adopting and adapting the ritualisations of the tea ceremony to create the perfect cup of coffee. One such place, Weekenders Coffee, a traditional machiya style building tucked away at the back of a car park in central Kyoto, was opened with the aim of passing down the traditional kissaten (a Japanese-style tearoom) vibe while contributing to progression in coffee culture. This little place is the perfect fusion of both, with an on-site roastery and creative menu. The espresso and tonic is just delicious.

Finding food in Kyoto has never been difficult. Indeed, the city is the birthplace of the multi-course mastery that is kaiseki, and no Japanese town would be complete without an izakaya or two (or a thousand in Kyoto's case). The city's creative scene has spilled over into its restaurants; seasonal food is the order of the day in design-focused spaces such as Lorimer Kyoto which puts a twist on hearty and healthy Japanese-style breakfast and runs with an ethos of mottainai (no waste) cooking. The idea here is simple, everybody gets the same set meal, like a family around the dining table. Mealtimes here are regarded as precious and joyful acts that stimulate the senses and relax the mind - it's a wonderfully modern take on traditional Japanese home cooking.

The creative reach of Kyoto's residents stretches much further than food and drink, too. The arts scene is fascinatingly seductive with world-renowned events carving out their place in the Kyoto calendar. Lucille Reyboz and her husband Yusuke Nakanishi founded the annual Kyotographie International Photography Festival after moving to the city in the wake of the Tohoku earthquake. "We lived in Tokyo for a number of years, but moved to Kyoto when my eldest daughter was three, after the earthquake," Reboyz recalls. "Everyone was deeply shaken by the aftermath of such an event and we moved to Kyoto to create something for the community, inspired to awaken people's consciousness."

Kyotographie exhibitions are spread across the city, creatively staged in various traditional and contemporary settings, both by Japanese and international photographers. "Here we can open doors for artists to display their work in unique venues, from temples to an old warehouse at the Kyoto central market," Reyboz adds. "That's the beauty of Kyotographie, it couldn't happen anywhere else."

The story of the Kyotographie echoes the creative and cultural evolution happening across Kyoto. As past and present collide, the city possesses a spirit that's at once unshakable and adaptable. This is the Capital of Cool.