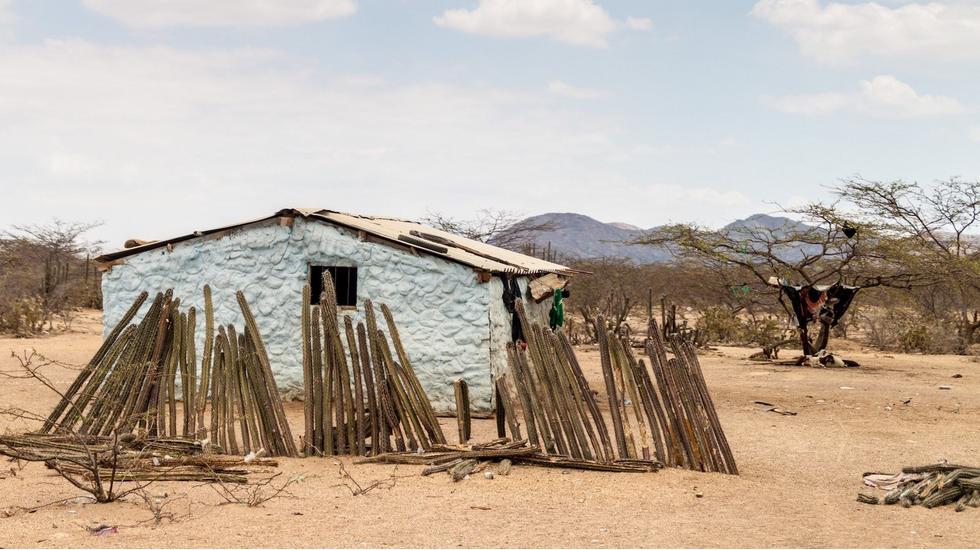 It's It's every traveller's dream, getting off the beaten path, exploring somewhere that feels untouched. Throw in an element of danger and it's up there with scaling Everest or finding your soul in a shamanic retreat. Indeed, getting off the track was exactly what I set out to do as I made the long, perilous journey through La Guajira, a vast desert region in the north of Colombia which stretches up to the tip of South America.

In the past, La Guajira has been known as one of the poorest and most dangerous regions in Colombia, an entry point for drug smugglers, a transit route for Venezuela and a target for armed guerilla groups. It's considered Colombia's most violent region, which is saying something in a country where the annual murder rate exceeds 25 in every 100,000 people. But after half a year travelling through South America I learned to take these warnings with a pinch of local salt - and I'm glad I did.

I soon discovered this was a place of genuine, raw beauty, a place where nature is left to its own devices. Here, the landscapes are bare; it's an arid, glorious ocean of sand where the silence is intimidating and dusty, empty roads trudge on into infinity. There are barely any tourists. The peace is punctuated only by a few loud, hectic cities. It's authentic Colombia in all its wilderness - and it's exactly what I was looking for.

Much of La Guajira is home to the Wayuu people, an indigenous tribe that occupied the area long before the Spanish arrived in 1499. Colombians, Venezuelans and Spaniards have previously fought over ownership of the land owing to its pearl reserves. More recently, it's coal which has sparked attention; Cerrejón, located in the south, is home to South America's largest open-pit coal mine. In spite of all this, the Wayuu tribe have remained, battling against invaders and resisting the culture imposed by colonisation. They speak a Goajiro, a language few other Colombians understand. They have their own unique traditions and inhabit a world so far from their southern counterparts that it's hard to believe it's part of the same country.

There's a reason few travellers in Colombia have heard of this place, let alone been there. It's not easy to reach. I got a bus from the better-known Santa Marta to Palomino, then a three-hour rickety bus to Riohacha, the capital of the Guajira department. A two-hour taxi ride brought me to Uribia, Colombia's answer to the Wild West, where the smell of dusty, hot air mixes with the buttery wafts of arepas being cooked outdoors. From there I haggled for a jeep and drove to my first destination, Cabo de la Vela. After three hours shaking my way along an abandoned, rocky dirt road without another soul in sight, I finally arrived.

Set right on the Caribbean coast, you can imagine this fishing village as a world-class holiday destination - a turquoise strip of sea flanked by fine gold sand, lined with restaurants, shops and hotels serving freshly caught lobster. Except here the restaurants are unstable wooden shacks deserted but for the tables and chairs and ordering food involves waking up the owners. The main strip is a dirt track covered in sand, the hotels are rustic lodges boasting more hammocks than beds and the only shop is a chemist where metal railings barricade the windows. This ghost town sleeps day and night. It's eerily charming.

Tourists, mainly Colombians from further south, have started to visit Cabo since it's crime rates have dropped in recent years - but it's clear the locals aren't quite used to it. There's no such thing as customer service and it's normal to wait two hours for your food. If you can persuade them to cook it. It's normal not to see anyone for an entire day. Catching a moped to a local viewpoint for sunset, you may encounter a few tourists and wonder, "how did they end up here?". Yet as swathes of orange, pink and red illuminate, all thoughts melt away, enveloped by the silence.

But things became more remote still. The next day I ventured further north with a local tour guide to Punta Gallinas, the tip of the continent, located another four-hours' drive and boat ride away. It's difficult to describe the feeling that hit me when I stepped off that boat. There's a sense of absolute nothingness, of lawlessness, of being at the end of the world. There's just a mass of luminous yellow, a glimmer of water in the distance, a sheet of blue sky, and our lodging, a makeshift looking outpost blurring into the backdrop.

It's hard to imagine that people actually live in this wasteland. There's no agriculture, vegetation or wildlife beyond snakes, goats, fish, thorn trees and giant, towering cacti. There is barely any electricity. Running water is limited. Weather is extreme. But the hundred or so people who do occupy its barren landscape have learned to cope with these conditions, making money from weaving, fishing, salt and, more recently, the droplets of tourism slowly trickling in.

Children now bar the roads asking for sweets from visitors as payment for passing. Tour guides coming from Cabo offer jeep trips out to the Taroa dunes - dramatic swathes of sand plummeting down into the rough waves of the Caribbean. The sole hostel here cooks fresh seafood ready for your return. Things are changing.

But ancient traditions remain, according to our guide Juan. Wayuu society remains predominantly matriarchal, despite the fact polygamy is common for men. Locals still live in rancherías; houses made from traditional mud and hay with cacti rooftops. Wayuus have their own laws, resolving disputes via an individual named the palabrero, a fact which has been recognised as a UNESCO Intangible Cultural Heritage.

When I asked Juan for an example of these laws, he told me: "If someone draws blood from another man, he pays him in goats".

It's a comical image but one that sums up my experience of La Guajira. What seemed unusual at first quickly became a norm. To the point that, as I made my way back down to Palomino, I barely even noticed the man next to me caressing a live, squawking chicken or the policeman discovering a baby snake smuggled in the luggage compartment - it writhed around loose, right on top of my backpack.

La Guajira is a place of all things extraordinary: people, incidents, landscapes. It's a place that's happily cut off from the rest of the world, one that's like nowhere else I've ever been. Vehemently independent and surprisingly self-sufficient, it's a land of real authenticity. And in a world where it's becoming ever harder to discover the untouched, that's worth more than its coal and pearl reserves ever will.