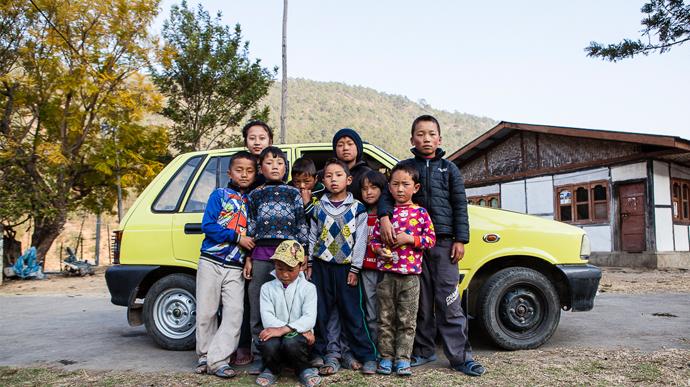 How How often are you invited into the lives of complete strangers?

While on a road trip in the Gasa district of Bhutan a temporary village on the side of the road caught my eye. Scattered tarpaulin tents, bay ponies and a small community of Bhutanese people occupied the field.

Through questioning my guide, I discovered that this community came from a small mountainside village called Laya, which is the highest settlement in the country. Up in the ether, Laya's altitude is so high that rice does not grow, so the villagers regularly make a three-day trek to Punakha in order to trade for food and other goods.

While it was clear that the villagers were resting after their long pilgrimage, I was welcomed into their community enthusiastically. Much like in India and Nepal, the Bhutanese people love to have their photograph taken so I was quickly ushered into tents where individuals posed and others excitedly introduced me to their families while children rushed in and out. During my stay, I took a continuous stream of photographs capturing glimpses of the lives of these villagers. While all of the Layap people embraced their impromptu photo shoot, Rinchen Wangdi, Leif Dorji, Pena Jamtsho and Rinzin Wangchul became the focus of my lens.