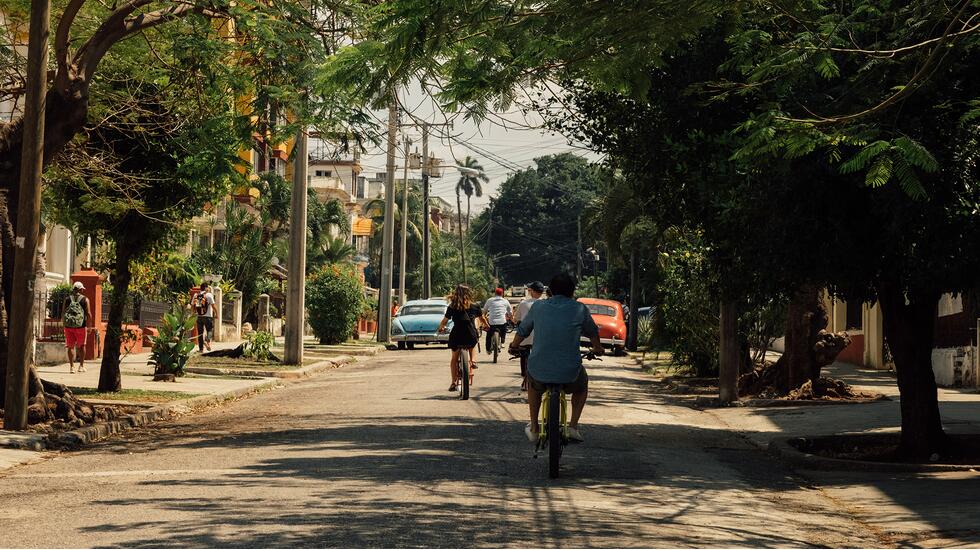 With With one foot in its storied past and the other stepping into a promising future, Cuba is an exciting place to be right now - and nowhere more so than in its capital, Havana. Why is now the time to visit? Just four years after mobile internet landed on the Caribbean island and a year after private businesses were legalised, young entrepreneurs are flexing their creativity like never before.

Enter Eminente, one of the country's most stylish and beguiling new brands. This premium rum label was developed by Cuba's youngest maestro ronero (master rum distiller), César Martí, and tips its hat to the island's heritage while tinkering with the art of distillation for a modern clientele. The results have been a storming success. Launched in 2020, Eminente - rich, complex, perfect for sipping or mixing into cocktails - has already been awarded the coveted Denominación de Origen Protegida status.

Eminente has also found its way into the hearts of Cubans, and onto the shelves of the coolest bars, through collaborations with the brightest artists, chefs, hoteliers and designers. You'll find many of them in this Eminente-approved guide to Havana, along with insider knowledge on where to find the freshest ceviche, most ornate cocktails, best independent boutiques and hottest party spots. Read on for the Havana beloved by locals - the one you won't hear about in a typical tourist guide.

Havana like a local: Exploring the city with rum brand Eminente

A palm-fringed road, left, and the sun-drenched streets of Havana

Where to Stay in Havana, Cuba

Just four bedrooms occupy this sumptuous Old Havana retreat, which feels less like a hotel and more like a stylish private home. Designed by Philip Winser (the man behind New York's The Fat Radish), it's a true tribute to a bygone era, with elegant lunette windows and marble tiles. There are plenty of inviting nooks in which to linger, too, from the palm-trimmed courtyard and lantern-strewn rooftop pergola to the music room (complete with grand piano) and cocktail bar, where you can mix yourself an Eminente cocktail to start your evening.

Stroll 10 minutes' north from the jumbled centre of Old Havana and it's impossible to miss this pistachio-green and rhubarb-pink bed and breakfast that occupies three storeys of a grand 1902 townhouse. The high ceilings, louvred shutters and original stained-glass windows evoke the historic spirit of this Unesco-listed corner of the city, but its nine spacious rooms and open-air sun terrace have been restored with a modern, Italian-influenced twist.

The courtyard at Gardens Havana, left, and an airy bedroom corner

Where to Eat in Havana, Cuba

Hidden down a nondescript alley behind a signless blue door and overlooking the colourful boats that catch its daily wares, this charming restaurant is renowned for serving Havana's freshest fish. Named after "Santy", a famous Cuban sportfishing captain, it specialises in world-class sushi and ceviche and is a firm favourite among the farándula (celebrities), so be sure to book ahead. Warning: there's no written menu, so it helps to know a bit of Spanish.

This bohemian farm-to-table eatery, located in an artist's charming home, is headed up by leading Cuban chef Enrique Suárez. Billed as Havana's first gastropub, it sources the ingredients for its inventive, daily-changing menu from an organic finca just outside the city. Factor in fantastic mojitos and a rustic, cosy interior filled with vintage typewriters, car numberplates and swinging saloon doors, and you have a memorable night out.

A breezy restaurant, left, and dinner at Santy Pescador

Where to Drink in Havana, Cuba

Head to the rooftop solarium of this chic boutique hotel for sunsets overlooking the lively Malecón waterfront. Run by famed Cuban percussionist Orlandito Mengual and his French wife, Malecón 663 is not just a hotel and bar but an ode to contemporary art, with bombastic creations on display at every turn. There's a different music theme every night, from Latin jazz to chillout DJ sets, and no shortage of expertly crafted Eminente cocktails. Arrive early in the evening to secure the best view.

This loved-by-locals haunt in the neighbourhood of Vedado (meaning "forbidden", as it was once a closed military zone) has a warm, colloquial feel, varied live-music programme and well-stocked bar with an emphasis on creative rum-based cocktails. If that's not enough to tempt you, there's also a menu of more than 50 hamburgers to work your way through. Grab a table in the outdoor courtyard, surrounded by exotic greenery, and settle in till late (it closes at 3am).

Sunset at Malecón 663, left, and a cocktail connoisseur in action

Where to Shop in Havana, Cuba

Skip the tourist traps and delve into Dador, a design collective run by female-only entrepreneurs. Behind the imposing wrought-iron gates, you'll find limited-edition garments that have been made by hand in their Old Havana studio and workshop. Be sure to chat with the owners about their story, and should you choose to invest in one of their timeless pieces, the team will alter it for you on-site, too.

For a unique souvenir, look no further than a bottle of custom-crafted perfume from this museum-come-shop. Habana 1791, which, according to chief perfumer Yanelda Mendoza, seeks to "recall the smells of colonial Havana", lives inside an 18th-century mansion with a gorgeous terrace. Here you can inspect the drying petals and other raw ingredients before their scent - whether vetiver or orange blossom, tobacco or sandalwood - is extracted. The antique-style glass vessels you'll take your concoction home in are things of beauty in their own right.

A DJ at EFE Bar, left, and a live performance

What to Do and Where to Dance in Havana, Cuba

Fancy letting your hair down? Then hotfoot it to EFE Bar, a vibrant, cosmopolitan venue in Vedado that transforms from a relaxed lunch spot by day to a buzzy party destination by night. Known for its excellent acoustics, this is one of the best places in town in which to dance into the small hours, under balloons, lanterns and disco balls.

For a colourful culture fix, take a taxi 20 minutes' west of Havana to explore the kaleidoscopic labyrinth of Fusterlandia. In 1975, artist José Fuster, otherwise known as the Gaudí of Cuba, set about transforming this once-poor, ramshackle fishing town into a sprawling mosaic masterpiece, starting with his own home and studio. Fuster still lives and works in the same spot, and if you're lucky you might even spot him in action.