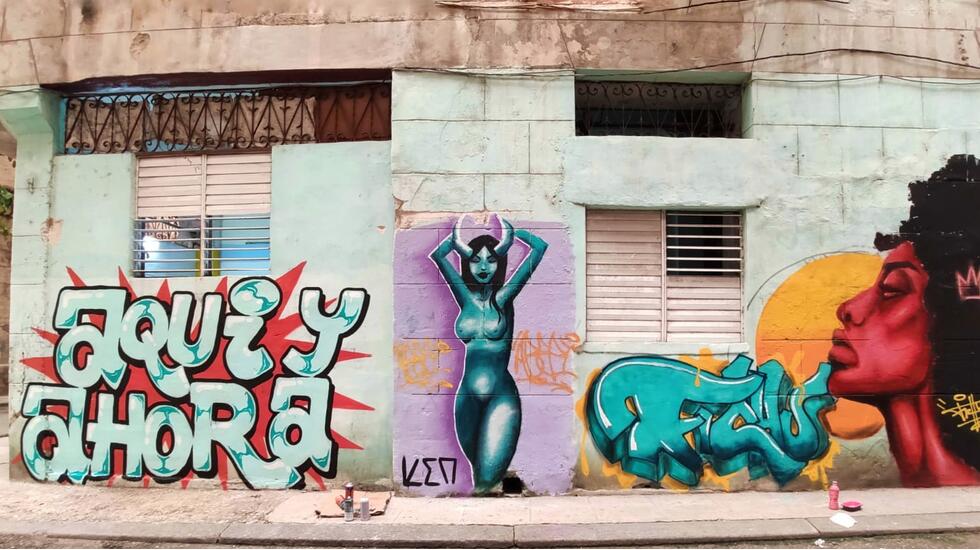 I I peer hopefully into the front-room shop, my mouth as dry as the piles of grit that have blown in from the street to settle in its corners. The old boys drinking rum from little plastic cups turn to stare at me.

"Tiene agua?" I ask the owner, bolstering my poor Spanish with the ubiquitous hand gesture of lifting a bottle. She shakes her head.

It's the fifth shop I've tried. I shrug, take a litre of rum and as many cigarettes as I can carry and head back into the sagging streets of Old Havana.

Cuba is staggering under economic sanctions imposed by the former administration of President Trump, as well as the effects of an economic crisis triggered by Covid - the most devastating since the fall of the Soviet Union in 1991. Although rum and cigarettes are apparently the only things not in short supply (unlike drinking water and flour), I've learnt it's wise to stock up on whatever you can whenever you get the chance.

In San Isidro - a tangle of streets in Old Havana with washing strung between the balconies of houses so tired you wonder how they're still standing - tough times have coincided with an outpouring of street art. I'm travelling through these streets with Spanish graffiti writers Sin Prisas (Carlos Pérez) and Dabuten Tronko (Joel Uve). They've come to paint with a local crew who call themselves "the freaks".

"San Isidro is a marginalised neighbourhood that has become an arts district," says El Fichu (Dennys Alejandro Arroyo Suárez). He started painting as a child, scribbling on his bedroom wall. "It all kicked off when Galería Taller Gorría opened in an old factory in 2016."

"Although street art began a long time ago on the island, it has always been controversial as it's so spontaneous and art is often censored here," El Fichu muses. "But in San Isidro, people are very progressive. They're used to living with art and welcome us into their homes."

As if to prove the point, Abepi knocks on a door. A young woman wiping her hands on a rag answers. She looks a little taken aback but smiles and gestures to the front wall of her house.

Within minutes, all four artists are at work on different sections. Unlike Sin Prisas and Dabuten Tronko, who start their serpent design with a spray can and deft flicks of their wrists, El Fichu and Abepi reach for their rollers.

"Spray painting is practically impossible in Cuba because they don't sell it here," Abepi says. "We mostly use acrylics and brushes. Because of the lack of resources, we try to make the most of what materials we have."

I sit on the pavement and crack open the rum. Someone cranks up a sound system and reggaeton drowns out the man hawking tamales from his handcart. Neighbours watch the murals come to life from their balconies. Women bring buckets of washing out to the stoop. Every kid in the barrio wants a fist pump and to sign their name beside the artists' in wobbly letters.

"The freaks" pause between works, left, and an artist adds the finishing touches. | Photo credit: @imogenleperewriter

Later, El Fichu takes us home to the apartment he shares with his mother and siblings. The outside of the building is slathered in his signature curvaceous women with blanked-out eyes, but so, too, are the communal halls and staircase. "I've never seen graffiti inside like this," whispers Sin Prisas.

As El Fichu's mum cooks mince, rice and plantain, neighbours wander in and out to see what's on TV and take turns holding the baby. I reflect that this merging of indoor and outdoor, public and private space is what makes San Isidro so special. When your home is a living, breathing art gallery, anyone can be an artist and life itself becomes art.

Swerve Havana's historic centre and head to San Isidro's Distrito de Arte - an open-air museum for urban artists - where five or six paint-daubed blocks are putting the humble neighbourhood on the international art map. Make pit stops in galleries such as Galería Taller Gorría (214 San Isidro) and refuel in the many cafés springing up to meet the growing visitor numbers, between stopping to check out landmark pieces including Green Girl by Abstrak and Diamond by Mr Myl (both on San Isidro), Guitarist by Stephen Palladino (Jesús María 20), Devil Woman by Abepi and Aquí y Ahora (Here and Now) by Sin Prisas (both on Aguiar/Muralla and Sol) and El Fichu's Soul on Fire and Dabuten Tronko's Forbidden Fruit (both on Valesco/Compostela and Habana).