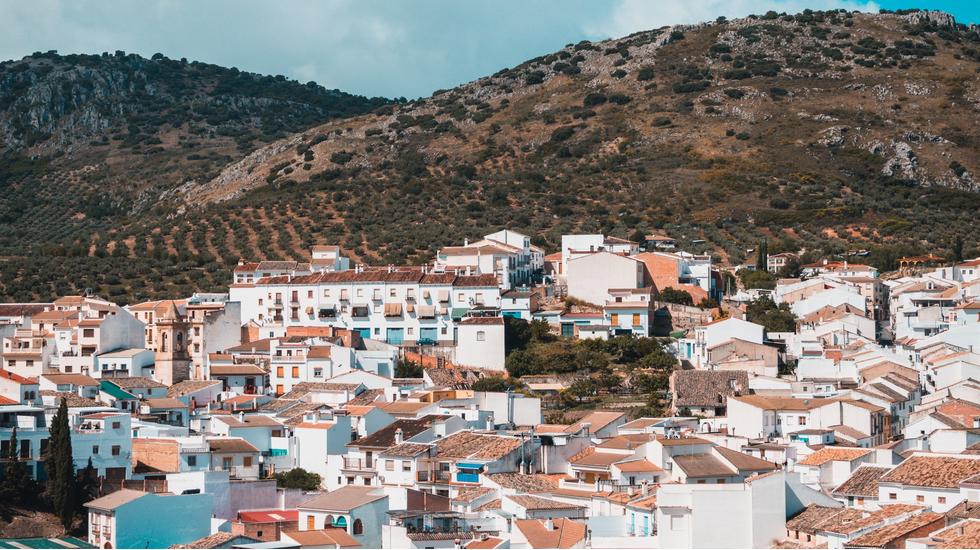 Pulling Pulling off the road, I squeezed into a tiny row of parking spaces opposite a restaurant and stepped out of the car in front of the Sanctuary of Our Lady of the Remedies. Shielding my eyes from the glare of the building's whitewashed facade, I made my way towards a sliver of shade in front of the columned entrance. Above the door stood her statue of the Lady, a local patron saint highly venerated in nearby villages.

Beyond this sanctuary was the panorama for which I had made a stop, the view I had been snaking towards along narrow country roads. Perched atop a distant hill, the town of Olvera surveyed the endless rows of olive trees below, its imposing church and Arabic fortress touching the sky. Having seared the scene into my memory, I returned to the car and headed into the town, just one of Los Pueblos Blancos (the white towns), a string of sleepy settlements scattered across the landscape of Andalusia like a broken pearl necklace.

The neighbouring provinces of Cádiz and Málaga stretch inland across arid, mountainous hinterland renowned for wine and sherry production. Where the provinces meet, nestled among Sierra de Grazalema National Park and its surrounds is this chain of towns. The national park is a land of steep summits, caves and mountain passes where vultures soar overhead. Despite the close proximity to Málaga, its airport and the Costa del Sol, it's remarkably devoid of foreign travellers; with the exception of die-hard cyclists powering up the inclines, the towns appear to remain tranquil enclaves of residents and those visiting from the cities.

I began in the gateway town of Ronda, 100km from the coastal hub of Málaga. Dating from the ninth century BC, it's one of Spain's oldest towns and few others boast such a spectacular location. The town perches atop a soaring plateau straddling El Tajo gorge, which naturally divides the old and new town. The towering Puente Nuevo bridge traverses the fissure that splits the settlement, its arches plunging away into the abyss below. Following winding cobbled roads leading to the bottom of the town, I raced the setting sun to the bottom of the gorge. Far below Puente Nuevo, the light illuminated the bridge and the ancient walls of the settlement. The night was warm and peaceful, a reflection of the tranquillity to come as I drove through the Sierra de Grazalema.

Heading north from Ronda the following morning (a Sunday) I reached Setenil de las Bodegas. The village was built in a valley, with bridges crisscrossing a dry river bed now bursting with flowers. Rising from this was a network of caves into which houses, shops and bars have been built; the village seems to emanate from the rock. It was mid-morning and the heat was getting up. Ducking into a wine and cheese shop, the temperature instantly cooled, showcasing the idea behind these buildings. Tiny swallows darted in and out of nests, their own houses also built into the valley sides. Old men sat on metal chairs outside bars, drinking cold beer in the late morning sunshine. I was an onlooker, peering through a window onto rural Spanish life.

Olvera is larger than most of the other white towns, with more signs of development but no less beautiful. Electronic thermometers on pharmacy signs indicated that the heat had reached the high 30s as I ambled up the incline of Calle Calvario, a street with walls adorned with ceramics depicting the 12 stations of the cross. Hovering dramatically over the town are the twin landmarks of the 12th-century Arabic castle and the church of Our Lady of the Incarnation, whose cream coloured façade stood proud against the blue sky's backdrop, its peeling paint only adding to its charm.

With the light becoming increasingly golden, I drove through the guitar-manufacturing town of Algodonales, heading for a B&B on the outskirts of Grazalema. Crunching down a gravel lane, I reached Tambor del Llano, a small hotel in a renovated building set amid acres of countryside where I spent the evening on the terrace, sipping red wine and picking out constellations in the velvet sky of the national park.

Grazalema, Zahara de la Sierra and the connecting mountain pass approach aesthetic perfection. Painted houses are impeccably maintained, not a rust-coloured tile is out of place and fuchsia bougainvillaea cascades from balconies. The streets fan out and uphill from a central plaza bordered by a sleepy church and an equally sleepy police station. Cafés dot the surrounding cobbled streets, serving espressos to septuagenarians who sit on benches and lean on walking sticks for their daily chat beneath straw hats and flat caps.

The 20km drive to Zahara de la Sierra was one of the most dramatic. The road reaches its zenith at Puerto de las Palomas (Doves' Pass), 1,357m above sea level. The sides fell away steeply as I wound my around a spectacular series of switchbacks, the landscape undulating into the distance, veined with curvaceous lanes and rows of olive trees. At the foot of the mountains far below, a steep crag rises from the plains and looms over a turquoise reservoir. Atop this outcrop sits Zahara de la Sierra, a 12th-century castle proudly sitting on its rocky throne at the summit. While its setting is more dramatic than some of its neighbours', Zahara too had the familiar winding streets of whitewashed houses and the orange-tree-lined plaza was too inviting to decline a of beer.

After leaving the national park the following morning, I made my last stop before reaching the port city of Cádiz. Arcos de la Frontera was perched on a towering cliff, staring towards the sea across the plains below, like a sentry standing guard at the entrance to the Andalusian interior. Compared to the cities of the coast, travelling through Los Pueblos Blancos seemed an anachronistic reminder of a previous incarnation of Spain; a seductively sleepy corner where I was tempted to remain.