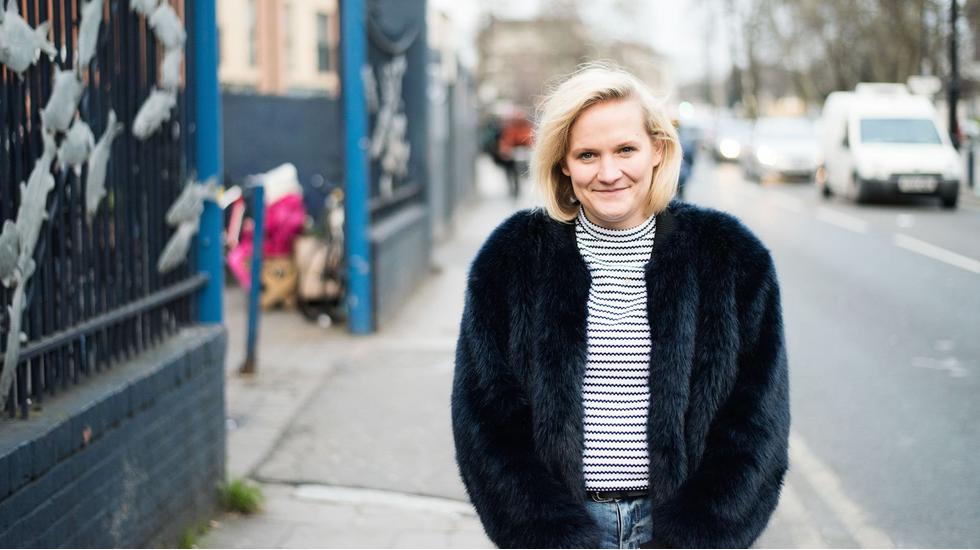 What What does an afternoon with Deliciously Stella, the Crunchie-scoffing, Irn-Bru gulping, gym-phobic anti hero of Instagram look like? Well, it begins with three massive bloody Marys and ends with a carafe of red and a few pizzas. With a bottle of gin and a chocolate avocado thrown in somewhere in the middle.

Of course, we made the same mistake as most people in expecting Bella Younger, Stella's creator, to be as messy and self destructive as her alter ego. We half expected her to turn up gnawing on a roll of liquorice with a couple of Lucky Charm marshmallows stuck to her fringe. In fact, this young comedienne is full of wisdom. She built the Stella character as an antidote to the influx of (often "smug" and "malnourished") wellness icons plastered across Instagram at the moment. But the point is not to make fun of them. For the most part, Bella is just riding the wave of a health-obsessed generation, with a character that "basically thinks she is being super healthy, but has just got it completely wrong".

Bella says: "At first, the character was essentially just me. Someone who eats and drinks too much and rarely visits the gym. Now she is definitely a parody of a wellness blogger." And exactly how similar is the stand up comic to the character? "She's a caricature. I think being healthy is great," she tells us. "I have no quarrel with anyone who wants to eat more vegetables. But what young girls don't realise is that somebody beaming at you on a book is not beautiful, thin and rich because she eats organically farmed seeds. She's beautiful, thin and rich because her parents are beautiful, thin and rich. It's called genetics, and the class system."

We nod in agreement, our hands wrapped around our third gin cocktail of the afternoon. "I've definitely been surprised by the response," Bella continues. "I definitely think people were ready to see a lot less of the hashtag 'blessed'. It can be awfully off-putting to see someone smugly downing a green juice when you've got a hangover at work and had hula-hoops for breakfast."

Tell us how Deliciously Stella was born

Stella was born when I was working in food TV and I was meeting A LOT of women who were spiralizing vegetables. I spent a whole Sunday afternoon on Instagram staring at headstands, cherry blossoms and pastel houses and I couldn't believe that these were the only type of women who use social media. I thought that Instagram should start reflecting more of the people I know, who are essentially all rotters.

Did you have an aim to make a point with this character, or was it purely a comedy outlet?

At the time I just thought that my friends and I would be able to have a laugh at the reality of our abs (non existent) juice cleanses (booze) and gym selfies (red as a tomato and sweating so much you are about to drown). Then I started to see it getting shared around a bit and I was like, 'wait!' maybe this is a better way to be a comedian than stand up. Maybe I'll never have to gig again! I still have to gig. But a bit less.

How similar are you to Stella?

Now that Stella is a real life stand up character I would say that we are very different. We are both middle class white women because I am bad at accents and minstreling is frowned upon, but Stella believes that science is just a theory like evolution so the similarities end pretty quickly. I also do love eating unhealthy food, I'm not confused between Ferrero Rochers and energy balls. As much as I would like that to be the case.

What do you really think of the 'wellness' trend at the moment? Has it gone too far?

I think that being healthy is great. I have no quarrel with anyone who wants you to eat more vegetables. What does annoy me is that it's very exclusive and sets unrealistic standards for people. The market has become saturated with people all too ready to peddle you a 'lifestyle' that's backed up by little to no scientific fact. The calorie content in a ball of dates is very similar to that of a mars bar. Why has nobody looked into this?!

What's been the best moment on stage for you so far? And the worst.

My best moment on stage was my first preview. It was full of wonderful women wearing Breton tops whom I have decided are definitely my target audience. If like me you have a spiralizer, but can also laugh at the fact you have a spiralizer you are definitely one of my own. My worst was actually last night, where I headlined for a group of rowdy Clapham estate agents and some unimpressed food bloggers. At one point somebody in the crowd said "I'm actually friends with Deliciously Ella and this is really offensive." My 30-minute set became a 15-minute set pretty swiftly.

Where do you go for a really nutritious breakfast?

Everybody knows that the best breakfast in London is from McDonald's. I am so thrilled that they've started selling it all day. My local branch has just had an amazing refurb so I'll be nipping in for a hash brown all day long. Did you know hash browns are gluten free?!

If you're cooking it at home, what do you usually go for?

I love trying out different flavor combinations. I'm always thinking out loud like "would WKD be good in a cake batter?" or "how many peperamis can I roll in a sheet of puff pastry?" I'm definitely experimental.

Tell us a street food vendor that you love, any healthy ones out there we should know about?

Although I wouldn't normally condone eating food off the street, sometimes I will go and hang around Domino's at the end of an evening and see if any pizzas fall off the back of a moped. You have to be quick so they don't catch you, but it's worth it for the adrenaline kick.

Favourite lunch spot at the moment?

I'm unemployed right now because I think that paid work gets in the way of my lifestyle so after a few hours of yoga every morning I'll just go and hang out on a park bench with some green juice. Gordon's is one of my favourites. Or apple Sourz.

Where is your go to place for a dinner date?

Nothing says romance for me like Nando's. I've been trying to get a black card for months now so any chance to remind them I exist is a win for me.

What's your favourite food market in the city right now?

My favourite food market is the Odeon cinema in Leicester square. The produce is rare so it can be expensive but they definitely have the best pic 'n' mix in the city.

What shop do you always turn to when looking for health foods?

I only like to buy locally sourced produce, so I buy all of my ingredients from the corner shop nearest to my house. The closer to the kitchen your food is, the better it is for your body.

You always look so well. Where do you work out?

I love spinning. It's a great way to exercise. You can do it by getting really drunk and then lying down.

What's your favourite area in the city right now, and why?

My favourite area of the city is the Wandsworth Bridge roundabout because there's a McDonalds drive thru. I love the thrill of eating without having to walk anywhere.

Where do you go to clear your head?

My head is usually pretty clear because there's not that much in it but if something is troubling me I might go to Hackney city farm. I love being at one with nature.

What's your number one beauty tip for someone living in London?

Natural is always best so use whatever's around you if you can. Soot can make for a wonderful eye shadow and red wine is a gorgeous lip stain.