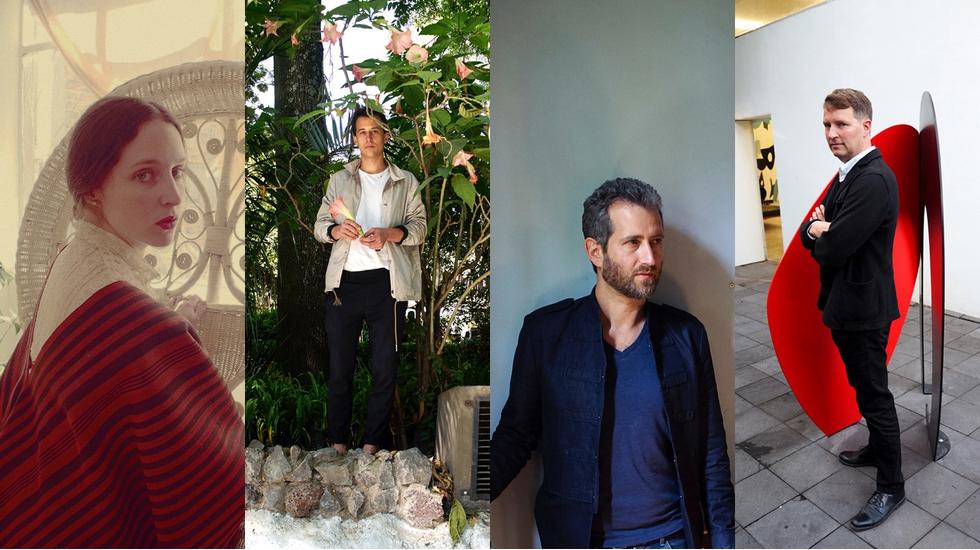 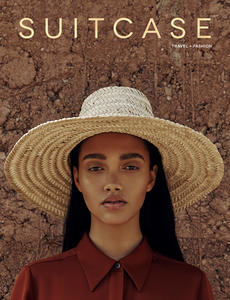 For For Volume 14 of SUITCASE Magazine: The Art Issue we travelled to Mexico City, a metropolis that offers incredible depth and breadth across every creative discipline. We discovered a burgeoning fashion scene, a growing number of cutting-edge galleries and design projects that have earned the megacity the accolade of World Design Capital for 2018 - it's no wonder so many artists are inspired by the city's patchwork streets. In the aftermath of Zona MACO, Mexico City's and arguably Latin America's biggest art fair, we spoke to four international creatives about their relationship with the Mexican capital.

Mercedes Nasta is a musician and artist living in Mexico City. She released her new album Basalto earlier this year, launching at the Tamayo Museum of Contemporary Art in the run-up to MACO art fair.

Where in the city do you feel most creative?

In my studio where I spend long hours creating. I also enjoy visiting the Bosque de Chapultepec, which is a few blocks from my house. Both the park and the many museums within it - Museo de Antropología, Museo de Arte Moderno or Museo Tamayo - are very inspiring.

What inspires you about Mexico City in particular and Mexico in general?

I love the rainy season in Mexico City - it goes on for months. I like its old houses and buildings, the trees and the flowers. I appreciate its art, food, antiques and gatherings with friends. I also find Mexico's diversity and geography very inspiring - the different music, the pre-Columbian settlements and the artisans.

Where do you go when you feel like you need to escape the city?

I enjoy going to the mountains, the countryside, the lake or the ocean.

What aspects of Mexican culture inform your work?

Many of the songs on your album are stories about the past or inspired by nature and art in Mexico, tell us about the song Barragán.

To me songs are like shamanic rituals, and some stories have to be turned into songs so that people make them their own and the stories abandon the body. The song Barragán speaks of an old obsessive love and about my ongoing love for the architect Luis Barragán. He was a fascinating creature obsessed with detail, colour, dimension, gardens and light. He was also very religious. The song speaks of a devotional attitude to love, and also about losing love and finding comfort in a garden, which in the song is a metaphor for my mind.

If you could perform anywhere in Mexico where would it be and why?

There are many beautiful pyramids and temples in Mexico I find inspiring. I would love to perform in Yaxchilan, a Mayan settlement in the heart of the jungle in the state of Chiapas. You can only arrive there by boat through the Usumacinta River, which divides Mexico and Guatemala. The place is inhabited by a colony of howling monkeys called the Saraguato.

One myth about Mexico City that you would like to dispel?

That it is't a safe place.

One of the most controversial pieces of art at this year's MACO art fair was The Toilet, a collaboration between artists Yoshua Okon and Santiago Sierra. The work is a fully functioning toilet made of aluminum, stainless steel and fibre glass and is a critique of the controversial Soumaya Museum designed by Fernando Romero .

Tell us about your work and what led you to make a fully functioning toilet.

The piece is a critique of the Soumaya Museum as a symbol of corporate power. Corporations operate with no regulations and are responsible for most of the human exploitation and environmental destruction on our planet. And no one is holding them to account - most people are distracted by terrorists and narcos (druglords), both of which are only symptoms of a wider problem. Corporate culture is the root cause of many problems we face today, including violence, massive immigration, global warming and poverty.

Who do you conceive of as your audience?

How important is Mexico to your work?

Mexico City is a very complex city where you can find a lot of sophistication, but there is also a darker underbelly to our culture. In other words, the dark side of capitalism - which is harder to spot in so-called 'developed nations' due to the powerful role of mass media - is hard to ignore here. In that respect it is a good place for artists, because it really keeps you grounded; it's much harder to be in denial here than it is in Europe or the US. So that is one of the reasons I like living in Mexico City. Plus the food is amazing.

Your work addresses the idea of activism in a striking and very humane way. If you were to explore other cities, where would you visit and why?

Well, broadly speaking, the focus of my work has to do with the effects of global capitalism. That is, a very specific kind of capitalism that was developed in the last 60 years or so and that has unfortunately reached almost every corner of the planet. In that sense, I tend to find plenty of content anywhere I go.

Your work uses humour to transmit serious messages. Is Mexico a funny city?

Well, humour is a powerful mechanism that helps us cope with everyday life, especially with the frustrating aspects. Like in the UK, dark humor is very common in Mexico. Early in my career I remember being annoyed by how solemn local artists tended to be and I remember thinking that I was getting more insight into the city from popular jokes than from art. I couldn't understand why art was so deeply associated with solemnity, as if that made it deeper or more serious. Intelligent and sophisticated humour gives us a critical distance from ourselves and our environments.

In collaboration with Attilia Franchini, josegarcia ,mx gallery represented Swiss-born, New York-based artist Yves Scherer's show, which was part-housed part in Luis Barragan's Casa Pedrega and part in an abandoned house in the centre of Mexico City. Both environments leant his installation, entitled Snow White and the Huntsman, a fairytale feel.

Where does the inspiration for the titles of your shows come from? They are all pretty romantic - are you a romantic?

The titles usually just come from literature, songs or things I read in the process of making the exhibition. Snow White and the Huntsman for example is from the movie, but as with all the titles of works in the show, it's mostly really just a description of the work which goes beyond the medium and size. While this sounds quite pragmatic, I'm definitely a romantic when it comes to other things in my life!

What does love mean to you?

For where I'm headed right now, it's mainly the stove in the basement.

You engage with celebrities in your work - what role do they play and why do you find them interesting?

I'm examining their importance in my life and the role they play in society as a whole. It's interesting to see how they function as models of how to live our lives.

What was the Kristen Stewart work about?

A few different pieces in the show are all about Kristen Stewart and they have different notions behind them. Generally I would say that the work touches on the relationship of a stranger to the celebrity - how one can personally relate to the moment she cheated on Robert Pattinson for example, and how this became an emotional issue for a larger audience which has never had a real-world interaction with any of the three people involved in the problem. On the other hand some of the pieces touch on a certain idea or aspect of fan fiction, where time shared with the star is formulated in a poetic way mostly.

Terence Gower is a Canadian-born artist living and working between New York City, Mexico and France. His show Free Association was hosted at LABOR gallery during MACO, and focused around a text the artist commissioned from Iranian psychoanalyst Gohar Homayounpour that describes a link between the intuitive artistic process and the Freudian analytical technique of free association.

How have you found living and working in Mexico city compare to New York and France?

I started working in Mexico City 23 years ago - the artists and the general working and production methods have had more influence on my practice than any other place. If you spend time in the US you quickly realise that Mexican immigrants are the hardest working professionals - they keep the country functioning (contrary to what Donald Trump would have us believe). So working in Mexico you have access to a pool of very trustworthy, super-skilled artisans in all materials.

What led you to commission Gohar Homayounpour to write the text around which the show is structured?

Dr Homayounpour is very interested in artistic practice, but has also published extensively on issues closer to home, such as complications around the veil in the consulting room. She and her husband, the art collector Mehdi Safavi, arranged the invitation to show my project Tehran Suite-about Victor Gruen's vast urbanism scheme for Tehran-at a private gallery in their city. I invited Gohar to test my hypothesis that the psychoanalytic technique of free association could be compared to an artist's intuitive process and her brilliant text Free / Not Free Association was the result.

Do you think music and moving image can be as powerful as a still image?

I think music and moving images are more powerful in a different way, and this is why I resort to these media forms, especially in their most accessible form - entertainment - in many of my works. Can a sculpture or a painting make you cry the way a song or a film can? Architecture comes close (try visiting the Imam Mosque in Isfahan!) and I guess this was my goal in uniting architecture and music in a pure emotional experiment in the piece I showed last month at Museo Experimental El Eco in Mexico City. I worked with the text of the Manifesto of Emotional Architecture, written by the designer of El Eco Mathias Goeritz, and invited a composer of gospel music to incorporate it into a song.

Tell us about the use of mobile in your work.

My first mobile Noguchi Galaxy was a public commission in New York, and was also shown at Labor in 2012. It is a direct precursor to the room-size mobile in this show, Free Association in that it functions as a 3D model of the fragmentary state of the unconscious. I use mobiles as a way to display this swirling maelstrom of subconscious imagery, much like large-scale 3D scientific models of cell structures or planetary systems. Alexander Calder is always there in my work as an early influence, along with other modern artists like Barbara Hepworth, Isamu Noguchi and Henry Moore. The mobile in this show is more than an illustration: it actually functions as a demonstration of the psychoanalytic technique of free association.