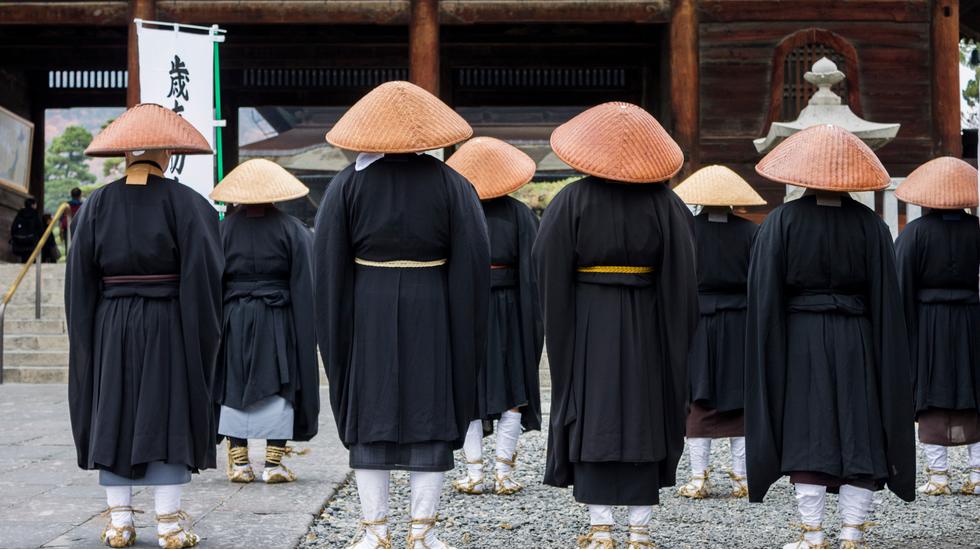 Snaking Snaking through the centre of Japan, the Mitsuboshi-Kaidou: Three-Star Road navigates ribbon-like streams, wedding-cake-white mountains and rural creative enclaves. Cutting through some of Japan's lesser-explored pockets, the road takes travellers between chaya houses, ancient castles and the homes of samurai warriors.

Running between six cities, spread across four prefectures where mountain air mixes with hot-spring steam and dense forests cusp vibrant old towns, the route is now easier than ever to explore with the hop-on, hop-off Three-Star Route Option Ticket (one-way). Offering a fuss-free and affordable way to immerse yourself in the artistic instricies that are woven into Japanese culture, the route takes you from A to B, with a whole lot of C's - by which we mean community, culture and cuisines - in between.

Get a head start on your itinerary below, but feel free to remix as you go along - after all, the one-way Three-Star Route Option Ticket suits the slower-paced, intuitive traveller. The route can take you to some of Japan's lesser-explored regions including Nagano, Matsumoto, Hirayu Onsen and the cultural delights of Takayama, Shirakawa and Kanazawa. Use the freedom of the pass to linger a little longer in your favourite destinations or skip others. All aboard.

Giving you the flexibility to customise your own itinerary, kick-off in Nagano. Nagano City draws visitors with its rich culinary scene, mountain hiking trails and the chance to observe the notorious snow monkeys bathing.

Rise early to attend a morning spiritual ritual service at Zenkoji Temple. Built in the 7th century, it's a famed pilgrimage site for the Buddhist community, home to the first Buddha image to arrive in Japan. The original is kept concealed behind a curtain and is only revealed once every six or seven years. The next celebration - called Gokaicho - takes place in 2022.

After orienting yourself at the temple, tuck into the area's culinary delights. Sample oyaki (a buckwheat dumpling usually stuffed with vegetables) at Ogawa No Sho Daimon Store before heading to stock up on shichimi togarashi. Roughly translated to mean "seven spices" the blend features crushed chillies, sesame seeds and dried orange peel, and tastes best sprinkled over soba noodles. Passing the recipe from generation to generation, Yawataya Isogoro has been producing it for more than 280 years.

Catch a bus to the Togakushi Shrine, where hiking trails weave between cedar trees and glistening ponds. Starting at the lower of Togakushi's three shrines, embark on the 2km ascent to its middle-level counterpart. Detour from the well-trodden trail to be rewarded with mountainscapes reflected in Kagamiike Pond, the so-called "mirror pond". Pro tip: the soba noodles from the nearby street-food stall are excellent fuel for the return hike.

In winter, snow-sure revellers will want to hit the nearby pistes. Host of the 1998 Winter Olympics, Nagano is a trusted entry point to the Japan Alps' best resorts - all interconnected ski fields and powder-perfect runs, including the highest in Japan. Shimmy across to Shiga Kogen to mix days on the mountains with visits to the notorious snow monkeys. More than 200 monkeys bathe in the hot springs at Jigokudani Monkey Park giving you a chance to get up close with the playful troops.

Stay: Bed down at Oumeitei Tsuji Ryokan to catch the sunrise ceremony in the morning.

Be sure to stop by Matsumoto, where modernity and tradition exist in harmony. Far from just a tick-box for visitors, Matsumoto Castle is the city's epicentre; many must-visit streets radiate like a web from the castle walls. It's a good place to get your bearings. From the outside, the castle's multi-roofed, six-storied structure is architecturally spectacular; inside snaking staircases lead you past ancient armour and weapons from the Sengoku period before delivering you to the castle's best viewpoint: the narrow wooden windows once used by archers and gunmen. Now, they're framed by cherry blossom and open up to views of a moat where, if you are lucky, you will spot a swan or two.

Next, nip in and out of neighbouring Nakamachi Street, a chessboard of black and white buildings housing artisan craft ships and cute cafés. Try the soft-serve ice cream from Café Senri. Time to study Matsumoto's famous import: soba noodles. Buckwheat - soba's signature ingredient - is grown in abundance in the surrounding areas, making Matsumoto soba noodles some of Japan's best. Roll up your sleeves and get in at Takagi's soba-noodle workshop. And yes, you get to slurp your hand-rolled noodles afterwards.

Fill yourself with fresh air and take a day trip to Kamikochi, located an hour west of the city. Open from mid-April to mid-November, its walking trails are fill-up-your-camera photogenic. Ramble past tranquil ponds, over the Kappa Bridge that straddles sake-clear waters and marvel at the mountainscapes reflected in the Taisho Pond. What's an alpine adventure without sufficient snacks? Stop by Kamonjigoya (you'll find it just in front of the Myojin Pond) for fish cooked over wood, and nearby Trois Cinq by Gosenjaku for apple pie.

Stay: At the historic ryokan Tsuki no Shizuka.

So you've feasted on slurp-worthy soba noodles, zipped up snow-heavy mountains and hiked through spectacular natural surrounds, now it's time to perfect the art of doing nothing. Your next destination? Hirayu Onsen, where steam curls around the base of the mountains thanks to its abundance of healing hot springs - there's even a rotenburo (outdoor bath) atop the bus station.

Post bus-station soak, head to Hirayu Minzokukan. Part museum, part farmhouse and part public onsen, it woos visitors with mountain vistas and natural surrounds. Try to squeeze in a dip at Hirayu no Mori too.

Fancy venturing a little farther? Day trip across to Shirahone Onsen. Unlike the steam-filled baths of Hirayu Onsen, the water here is creamy white and rich with magnesium and calcium that's said to relieve gastrointestinal ailments. Shirahone Onsen Public Notenburo is our pick for its riverside position. Nothing says Zen like the sound of a rushing river.

Stay: Splash out at Miyama Ouan for its private onsen baths and jaw-achingly beautiful views.

Punching above its weight when it comes to its culinary credentials, Takayama is renowned as the birthplace of hida beef - a delicacy that (whisper it) we're claiming is the best style of wagyu. Reared on mountain air and spring water for 14 months, the beef's marbling resembles a cherry-pink Jackson Pollock painting. Jostle elbow-to-elbow with locals at the Miyagawa Morning Market to sample the delicacy in croquettes, as sashimi and atop sizzling coals.

Walk it off with a trip up to the top of Mount Hotaka. Running up the Sengoku Ridge is the Shin-Hotaka Ropeway cable car - the first double-decker gondola in Japan - soaring more than 2,200m above sea level. Reach the top to peer across pistes that spill into villages and hamlets across the valley. In autumn, the gondola openings times are extended to catch the sunset from above the clouds. It's pretty spectacular. Avid climber? Pick up a hiking trail from the Shinhotaka Visitor Center, where the Ropeway sets off. Be warned, you'll need all the proper gear. This is strictly a no-novice zone and the trek can get pretty treacherous in parts.

Widely seen as one of Japan's most exciting festivals, the Takayama Matsuri takes place here in April and October - the latter featuring the Takayama Festival Floats Exhibition Hall, too. Shining examples of Takayama's long legacy of craftsmanship, these centuries-old floats are renowned for their flamboyant carvings and, in some cases, karakuri ningyō (marionette) shows. Next door to the exhibition hall, Sakurayama Nikkokan, is a warehouse-style hangar filled with miniatures of Japan's most celebrated shrines. It's a great introduction into the spiritual history of Japan if you haven't got time to visit them all IRL.

Up next: Shirakawa-go. A landlocked, secluded village in the heart of the Japan Alps. Guarded by frost-tipped mountains, it's famed for its 300-year-old, thatched-roof gassho-zukuri houses - the roofs resemble a monk's praying hands.

The architecture accomplishments are as much about form as they are function. Roofs are designed to protect the house from collapsing and heavy snowfall and the loft space is utilised to harvest silkworms as a source of village income with all techniques being passed through generations.

Strong pioneers for community tourism, villagers here live by the powerful philosophy of "yui". They meet once a month to discuss ways in which they can preserve their natural environment while also encouraging visitors to educate themselves on everyday life. Stay the night to get to grips with the spirit and spend time listening to the stories of roofers, teachers and children who make up this treasured alpine community.

Stay: Book a homestay at Shirakawago-Shimizu.

We're ending our journey in Kanazawa, where you'll be greeted by meticulously manicured Japanese gardens, timeless chaya houses and geishas scurrying in and out of narrow streets. The beauty of the city? You're plunged straight into Japan's cultural core.

Nearly all journeys begin at the city's poster-child landmark, Kanazawa Castle, home of the Maeda clan for 14 generations from 1583. This family helped establish Kanazawa as a creative enclave by prioritising spending on the arts and setting up workshops for travelling craftspeople within the castle grounds. Visit the 21st Century Museum of Contemporary Art, the Ishikawa Prefectural Museum of Art and the minimalist masterpiece D.T. Suzuki Museum for glimpses of the city's rich heritage that still exists today. Each offers a chance to immerse yourself in local traditions and culture, old and new.

Stroll through the neighbouring Kenrokuen Garden blossoming with immaculate landscapes before making tracks towards the Nagamachi district, located just west of the castle. Once the home of respected samurai warriors, it's here you'll find rows of traditional houses concealing Kaga Yuzen silk-dyeing workshops and stores. Dating back 500-years, this intricate technique is commonly used in the creation of kimonos. Roll up your sleeves and try hand-painting your own at the Kaga Yuzen Kimono Center.

Cross to the Higashi Chaya District. Wander through the maze of alleyways guarded by traditional chaya houses, recognisable by the delicate "kimusuko" lattice on the outside, before visiting the Kaikaro Teahouse for an authentic tea ceremony. Pay attention to the details - vegetable-dyed tatami (mats of woven straw) and fusuma-e (paintings on sliding-door panels) are both prime examples of traditional chaya interiors. Time your trip in line with a geisha performance, commonly held on Saturdays.

Stay: Kanazawa Machiya Kenroku's owner, Mr Konishi - or Hitty, as you'll come to know him - will let you in on all of Kanazawa's hotspots. Lucky guests might even receive a home-baked welcome cake. What more could you ask for?