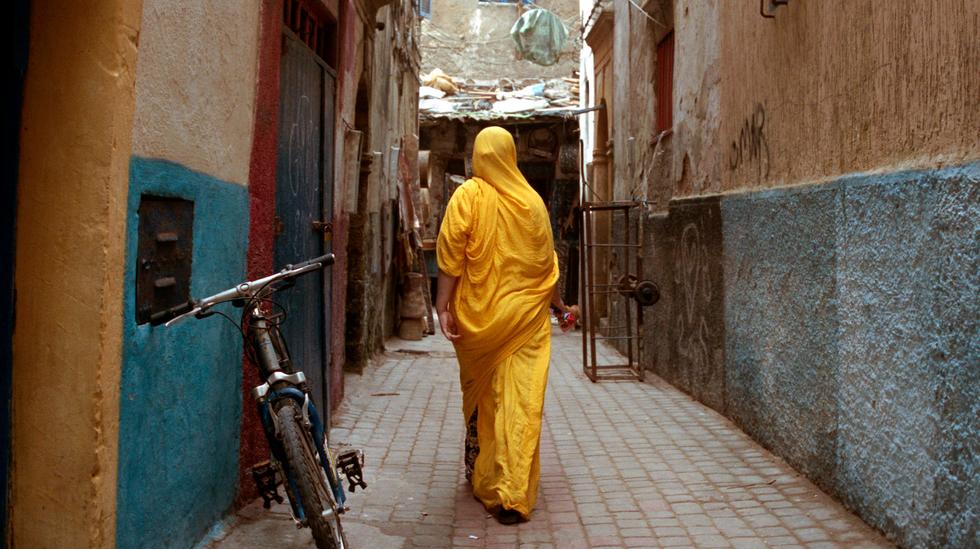 I'm I'm drawn to the everyday movements of people and their interactions with the world around them. Those fleeting moments that make up daily life are too easily ignored, such as finding a backdrop and hoping that something interesting happens before the light fades, or getting lost in streets you don't know and meeting people you never thought you would. I shoot everything on film and mostly on wide-angle lenses, meaning I have to be a part of what's happening rather than capturing it from afar.

Morocco has been on my list for years, and this trip took me to Fez, Essaouira and Marrakech. Three wonderful yet very different cities, each with a unique charm. Fez's Medina was far less hectic than that of Marrakech, while the seaside town of Essaouira is extremely laid-back. You get similar food wherever you go, so steering clear of the standard touristy restaurants is advisable. Sampling street food is a must. Go down to the port in Essaouira and buy sardines straight off the boat, then take them to a nearby street grill, add a Moroccan salad and you've got yourself a very local (and cheap) lunch.

After you've got lost in the Medina and found your bearings again, turn around and do the same again. This is the best way to explore the twisting streets where shops, restaurants and homes overflow into the streets, in buildings which seem both too close together and too old to stand for much longer. A small smile goes a long way in Morocco and more often than not you will receive a large one in return, so don't be shy to ask for directions (though street children often ask for payment in return).

You will drink your bodyweight in mint tea - the sweetest you will ever taste (note the locals' lack of teeth). Colours pop in the North African light, which reveals crumbling walls with multiple layers of blue, red and yellow, perfectly juxtaposed with the bright shades of women's clothing. Follow long days of walking with relaxed evenings on various rooftops, listening as hundreds of mosques around town sing out with a call to prayer as the sun sets.