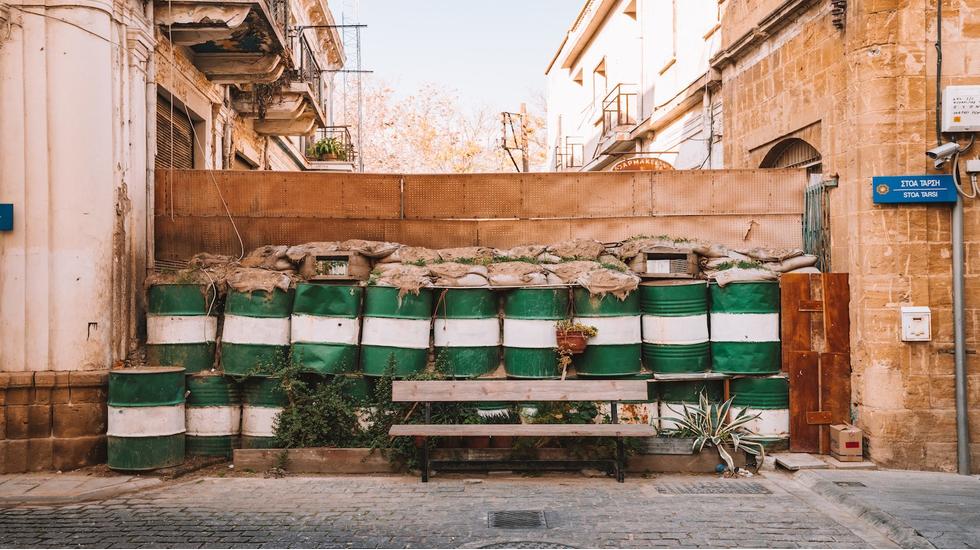 I I have always found Nicosia, with its boisterous cafés and lively squares, to have the most eventful mornings in all of Cyprus. In gardens across the ancient walled city, mandarin trees heave under the warm, sharp light of the Eastern Mediterranean. Shopkeepers throw open their doors to the steady hum of locals as church bells toll the time for breakfast. In the northern distance, the minarets of mosques peek over military barricades and checkpoints, over the infamous Green Line that now defines the world's last divided capital.

The island of Cyprus has reluctantly held this distinction for over 45 years. The southeasternmost member of the European Union, Cyprus and its capital have been partitioned since 1974, when a Turkish invasion split the island and separated its two ethnic majorities. Greek-Cypriots have since been allotted the south of the island while Turkish-Cypriots remain in the Turkish Republic of Northern Cyprus, recognised as an independent state by Turkey alone. The two communities are divided by a UN-patrolled buffer zone that spans the country lengthwise from east to west, severing miles of sun-bleached hills (and the occasional hamlet) that would otherwise stretch uninterrupted to the sea.

Today, Nicosia remains a patchwork town, a rare cultural experiment on an island accustomed to slow living. Yet it is often overlooked by tourists who favour the island's less complicated, more scenic offerings: the bay of Kyrenia and the Blue Lagoon; the seaside promenades and turquoise harbours of Limassol and Protaras; Greco-Roman ruins in fig and olive groves; stone-walled villages on lush mountaintops. As a native to the port town of Larnaca on the southern coast, I understand the irresistible, often romantic tug of the sea (Aphrodite herself was born off the rocky coast of Paphos, as the legend goes). But farther from the beach, the life force of the country pulses inland towards the capital. It is the heart of a modernising nation that no longer lingers on the lure of its antiquity, and is far more than just the casualty of an ongoing conflict.

South of the Green Line, Greek-Cypriots are often found among the bustle of Nicosia's Old Town. The tangle of historic buildings, weather-beaten to a pale yellow by centuries of scorching sun, now houses some of the country's most accomplished restaurants. Outdoor cafés and wine bars (stocked with bottles sourced from the vines of Omodos, Arsos, Inia) are scattered among contemporary art galleries and fashion megachains; a reminder of our proximity to continental Europe. Here, days begin and end in the taverna. At local favourites such as Piatsa Gourounaki (Piazza of the Little Pig), tables are piled high with seared halloumi and herb-stuffed meats while grill-smoke gathers under the palms. Just steps away, at Mousiko Kafenio (Musical Café), friends meet to dribble water in their ouzos, downing one after the other to the sound of the mandolin. When the last of the tzatziki is devoured, well-heeled crowds amble towards newly restored Eleftheria (Liberty) Square, the last work of architect Zaha Hadid.

One day, I meet my Aunt Anna for coffee in the Old Town on Ledra Street, the area's busiest pedestrian walkway. Ledra Street winds through the two halves of the city and is home to one of several checkpoints that allow access to North Nicosia. We meet at Giagia Victoria, a café with the homely charm of my grandmother's kitchen but whose eastern courtyard is comprised of the barrels and barbed wire fence of the border - a fitting illustration of how Cypriots make the most with what's at hand. Around the corner, the checkpoint protrudes ahead of us like a thorn, absurd and blistering among the brunching families and flower-rimmed balconies of Ledras. Astoundingly, the border was impenetrable to Cypriots until it was partially opened in 2004, after years of bitter dispute. Now, my aunt and I sit and watch locals cross on foot with passports at the ready.

"For Cypriots, crossing the border is now taken as a matter of course," says Anna who, like the rest of my father's side of the family, lost her home during the war and now lives in Larnaca. She is part of an estimated 250,000 refugees who were displaced during the invasion. "There was a strong reluctance to cross at first because seeing the homes and villages we lost was too devastating. But we are getting used to it now, and we go to the other side and we speak to each other." Anna sometimes browses the northern markets for textiles and has made friends with shopkeepers, many of whom speak a bit of Greek and always look happy to see her. "Now being able to spend time on the other side has eased the fear of what lies beyond the divide, and Nicosia is the more cheerful for it," she adds.

Today, locals are crossing to see more than what was left behind years ago. Monastic grandmothers go north to light candles in the Apostolos Andreas Monastery, one of the North's few remaining Greek Orthodox churches, with handbags full of cheese and olive pies for the journey. Turkish-Cypriots make the pilgrimage south to the mosques of Hala Sultan Tekke, the third most important holy site in Islam, after Mecca in Saudi Arabia and Al-Aqsa in Jerusalem.

As my aunt and I cross to the Turkish-Cypriot side, the wide road narrows towards covered bazaars and beautifully aged buildings, seemingly untouched since they were first built by empires past - the British and the Ottomans before them, all the way back to the Venetians and French Lusignans. An air of decay hovers over rundown grocery stores and uneven pavements. Past a few cafés where sun-drunk cats hunt for shade, markets unfold in a haze of dust and colours, cluttered and inviting, like the inside of a trunk of toys. As we walk, the road narrows further as labyrinths of thinner alleyways splinter from its core - a world apart from the sprawling commercial centres and high rises of the south.

The cobbles eventually pass the markets of Büyük Han (Great Inn), where local artisans greet shoppers with handcrafted goods and rosewater pastries. The Han is still one of the main establishments where Greek and Turkish-Cypriots rub shoulders regularly, shouting over each other like large families over a roast dinner. In the distance, the call to prayer sounds from the Selimiye Mosque, formerly the Cathedral of Saint Sophia. Beyond its gates, shoppers idle towards food markets to scoop up cumin, cinnamon and mint that will later become piping hot plates of köfte or moussaka.

The Han began life in 1572 as a lodging for traders and merchants, and today it houses boutiques, restaurants, cafés and a bookshop. The two-storied fortress is imposing yet warm, with honey-coloured walls of layered stone portioned into 68 rooms, each adorned with low-arched porticos framed in crimson bougainvillea. Once the Inn's bedrooms, the renovated shops look onto a courtyard where an Islamic prayer room stands on six marbled pillars with an ablutions fountain at its centre. Overhead, enormous white sails are draped from buttresses for shade, glimmering golden-orange in the afternoon sun.

Outside of the bookshop, we meet Erkan, a Turkish-Cypriot teacher who lives near the Han and pops in for a coffee and a chat on weekends. "The opening of the border has made the city better," he tells me as we discuss our governments' ongoing efforts to find a permanent solution to the border situation. Some citizens are even calling for the reunification of the island. "We are the two sides of the same coin. Peace talks stop and start, but the residents of Nicosia want the same thing: to live peacefully and enjoy our island. We don't want to go back to closed borders."

As night falls, we head back through the checkpoint to a cosy taverna on the Greek side of Ledras for more wine and grilled octopus. It is in such places that evenings always feel the warmest in Cyprus, places where generations of a family gather for hours over an enormous meal. On the radio, old folk songs praise the hidden footpaths and moonlit bays of home. We think of what Erkan said and decide we very much agree. The way forward for Nicosia, and for Cyprus as a whole, will be paved by its inhabitants, both of Greek and Turkish descent.

Far from a towering border wall, what divides Nicosia now is nothing more than a crumbling fence of barbed wire. On both sides of the Green Line, unhurried mornings unfold much the same: capped old men sit for the first coffee of the day, unfurling their newspapers and grimacing. Children kick their footballs back and forth under the same vast, cloudless sky. The city may take its influence from different mainlands, but it doesn't quite mirror either - not quite European, not quite Middle Eastern, but instead a shared place between.