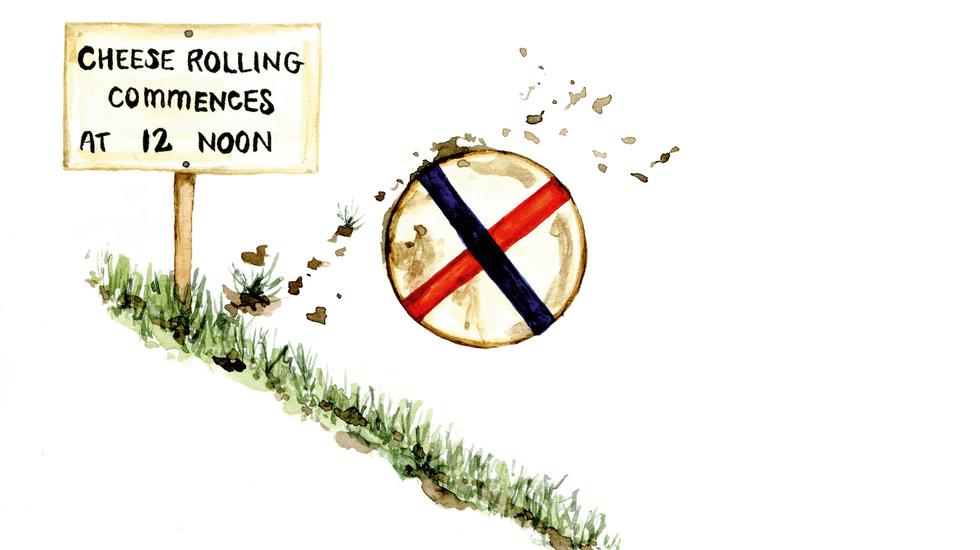 Britishness Britishness is popping the kettle on in a crisis. It's football chants and fry-ups, the Beatles and biscuits. It's stripping off at a faint ray of sunshine before complaining that it's too hot. To be British is to say sorry when someone bangs into you, to thank your hairdresser for that new 'do before crying all the way home. It's knowing all the words to Wannabe by the Spice Girls. And didn't your mother ever tell you to queue in an orderly fashion?

The words British and tradition go together like fish and chips, bangers and mash, Sunday and roast. Granted, today the nation's spirit is embodied more by the Great British Bake Off than Sir Winston Churchill. Bets are that, come Christmas, we're more excited for the John Lewis advert than the Queen's Speech. However, there's a set of rituals, of eccentricities, that tie us together. But where do they come from? And what do they say about us?

To many outside of Blighty we're a nation of weirdos. The unfathomability of our pronunciation is perhaps trumped only by our use of the word "pudding". Is it Christmas or black? Yorkshire, steak or pease? Don't even get me started on chia…

Rural pastimes in particular are the stronghold of British eccentricity, a Monty Python skit brought to life. The annual summer fete wouldn't be complete without a few men skipping about with bells on their knees, hankies waving while they bang sticks together. Every spring since 1826 people have flocked to Gloucester to throw themselves Jack and Jill-style down Cooper's Hill in the hope of catching a runaway nine-pound wheel of cheese. In Surrey men carry their wives in an annual race initiated by the Vikings in 793AD. On the first Sunday of February clowns fill Holy Trinity Church in Dalston for a celebration of Joseph Grimaldi, who revolutionised pantomime at the turn of the 19th century. Oh yes they do. Along with competitive worm charming and mayor weighing - how dare a politician gain a few pounds at the taxpayers' expense? - May Day is marked in several southern cities by Jack in the Green. The Jack - a man completely covered by a pyramid of leaves and foliage - is led along the streets before being symbolically slain in order to release the spirit of summer. Come the end of the month, the annual Cotswold Olimpicks dating from 1622 bolsters the divine British trinity of drink, sport and downright ridiculousness. Shin kicking and piano smashing, anyone?

However, tradition isn't all fun and games. As much as Britishness is about community and not taking ourselves too seriously, so too is it - or at least the ideal of it - defined by democracy, rule of law, individual liberty and tolerance. Speakers' Corner is a testament to this. Its use dates from 1855, when riots broke out on the northeastern corner of Hyde Park in reaction to a Sunday Trading Bill that forbade buying and selling on the only day that working people had off. By 1872 a Parks Regulation Act cemented the patch of land as the home of free speech. Revolutionaries including Karl Marx, Vladimir Lenin, Marcus Garvey and Christabel Pankhurst have mounted the soapbox here. In 2003 it marked the finishing rally of the 3million-strong march against military action in Iraq.

It seems that such practices define us as a nation, that traditions stand for the traits and values that we cherish. Indeed, a 2014 Ipsos poll found that out of 16,000 participants in 20 countries, Brits valued their customs more than most. Second only to China (90 per cent) and Russia (82 per cent), four out of five Brits rated pastimes as the most important part of society.

It's odd, then, that many things that we think of as being quintessentially British are often not so British at all. King Arthur and umbrellas can be traced to France. Bungalows are an Indian invention, polo is Persian and Punch and Judy is Italian. Marmalade comes from Portugal, as does battered fish. St George himself was a Turkish-Arab.

Our land is perhaps less green and pleasant than a patchwork of many colours. Take Morris dancing. This cornerstone of British rural life has muddled foundations. Some sources indicate that Italian dancers brought the practice to Britain during the Renaissance. Others suggest that its name derives from "Moorish", referring to the trend for Muslim-Spanish decoration in the Middle Ages. A belled ankle must have seemed very risqué.

The bastion of Britishness that is the Women's Institute hails from further afield still. The association was formed in Ontario, Canada, in 1897 by the educationalist Adelaide Hoodless who wanted to encourage rural women to get involved with food production. Only in 1915 did the first branch open in the UK at Llanfairpwll, Anglesey.

In this identity pandemic, nothing stands out so much as tea. Coupled with biscuits, it forms the Eucharist of the British nation. A 2016 survey to commemorate the Queen's 90th birthday - Rule, Britannia! - revealed that tea is our most exalted tradition. However, the leaves and their brewing originate in 7th-century China, where it was used as a medicinal drink. Only in the 1600s did tea drinking become popular in Britain, when colonists began producing the plant in India. Even tea bags were (accidentally) invented by a New York tea merchant in the 20th century.

It's interesting that so many things tied up with British identity are foreign by birth. But if Britain's ideological membrane can absorb traditions from abroad, it stands to reason that our pastimes can bleed out into the international body too. Today you'll find a Speaker's Corner in Italy, Lebanon, and Thailand among many countries. Bog snorkelling, which began in 1976 near Llanwrtyd Wells, Wales, has been adopted by Australia, Ireland and Sweden. Sure the Cotswold Olimpicks serves as totem of British oddballism, but so too is it an antecedent to the modern Olympic games. The Champion of the Hill event - involving a jump, spurning the barre (log tossing), hammer throw and shotput - inspired the modern-day pentathlon. In 2012 the British Olympic Association hailed the Cotswold event as the "pre-dawn of the Olympic movement".

National traditions - British or otherwise - belong in a broader conversation. Such an exchange of ideas and influences across social, political, geographical and historical divides is evident in the use of the maypole. Just like when children weave the ribbons on May Day, they have become entangled in a complicated history.

The maypole began life as a medieval Germanic pagan fertility ritual. The pole is representative of god's phallus penetrating mother earth. Only after the "heathenish" maypole was outlawed by Puritans in 1644 did it take on the symbolism of tolerance and community that we recognise today. Consider other countries, however, and maypole traditions vary. Germany and Austria use decorated trunks. In Sweden the structure has been transformed into a crucifix. In Italy the practice involves a red flag in a tree, a nod to the French Revolution. Traditions are fluid.

And yet nothing pulls a Limey's heartstrings as much as messing with our traditions. When Brexiteers howled their battle cry, it was from a gimcrack stage set of Britishness. Brussels was positioned as attacking everything held sacred to us - lollipop ladies, thatched roofs, mushy peas and saucy seaside postcards.

While pastimes are a key part of Britishness, when viewed in a historical and global context they remind us that we're part of a cultural conversation much bigger than our small country. Far from threatening domestic life, the exchange of ideas and the fluidity of traditions enriches our collective identity. Britishness is the sum of the all things that have been borrowed and adapted from other cultures, woven together in our uniquely whacky way, to form something distinctive.

In 1624 the English poet John Donne wrote: "No man is an island." Our nation may well be surrounded by water, but it's the ebb and flow of people and ideas that keeps us bobbing along.