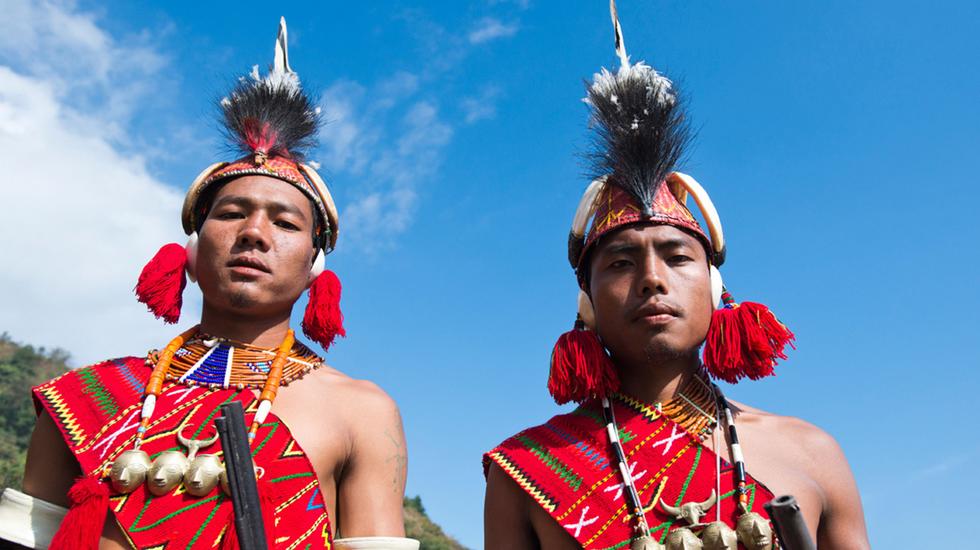 My My Bell 412 helicopter searched for the helipad, a spherical silhouette on a patchwork of multicoloured terraced houses, slung out on a ground of undulating forest. I felt like Elizabeth Bowen, a lone female entering the Land of the Head Hunters - albeit by much more modern means. In these far-flung reaches of eastern India lies Nagaland, a region shrouded in mist, mystery and misconception. Every December, amidst a cacophony of colour and sound, the state's 16 tribes put their differences aside and take part in the annual Hornbill Festival.

Heard of it? Probably not... but in India, the Naga's notoriety precedes them. Despite government initiatives to increase footfall, only a trickle of tourists travel to this corner of the country every year. But the wheels of change are in motion. The 12-hour journey from Delhi has been slashed thanks to the introduction of daily flights to Dimapur and The Ultimate Travelling Camp, India's most ingenious 'hotel' has embarked upon a pioneering venture to introduce luxury travel to the region.

I was not fortunate enough to enjoy such luxuries as direct flights but the private helicopter, courtesy of TUTC's Kohima Camp, made up for it. Operational for just two weeks, from November 29 to December 12, the team has perfected the concept of nomadic luxury. Brainchild of General Deepak Raj, of former Indian Army fame and Dhun Cordo, wedding planner to the stars, this unlikely duo combined military precision with artistic flare to create the first camp of its kind. Nestled between the lush Dzüku Valleys in the village of Kigwema, it is just a 15-minute drive from the festival ground; when Modi is not in town.

Having missed the opening ceremony (the Prime Minister does not do security by halves nor do I skip breakfast) Keja, my guide, updated me on the afternoon's activities: a pork fat eating contest, a pork fat kicking contest and a pole, lathered in pork fat, climbing contest. So that myth was true: Naga's love their pork. Lard-based activities aside, attendees can also look forward to traditional song and dance performances and peruse the tribal wares for obligatory souvenirs.

While we waited for Modi to complete his presidential duties, Keja took me to his tribe's morung. Traditionally the physical and metaphorical centre of village life, a morung is a place for men to share stories, farming tips and the odd glass of rice beer. These days women are allowed in too and I was treated to a tankard of the stuff. I was beginning to enjoy myself as much as the locals, who'd been boozing since the AM.

"How about a traditional Angami lunch?" suggested Keja, "to accompany your traditional 'aferitip'? They've got everything". Keja was right, the Angami's really did have everything on the menu: cows intestines in a blood gravy, fermented bean curry and tushichi which, for those of you that are not familiar with, is dog.

Stomach distinctly turned, I passed at the opportunity to take part in the infamous (and potentially fatal) chilli-eating contest. But for purveyors of peculiar foods or those in search of the unusual, Nagaland and the Hornbill Festival is the assault on the senses that many have been looking for. Be gone the Golden Triangle, this is India as you have never seen it before.