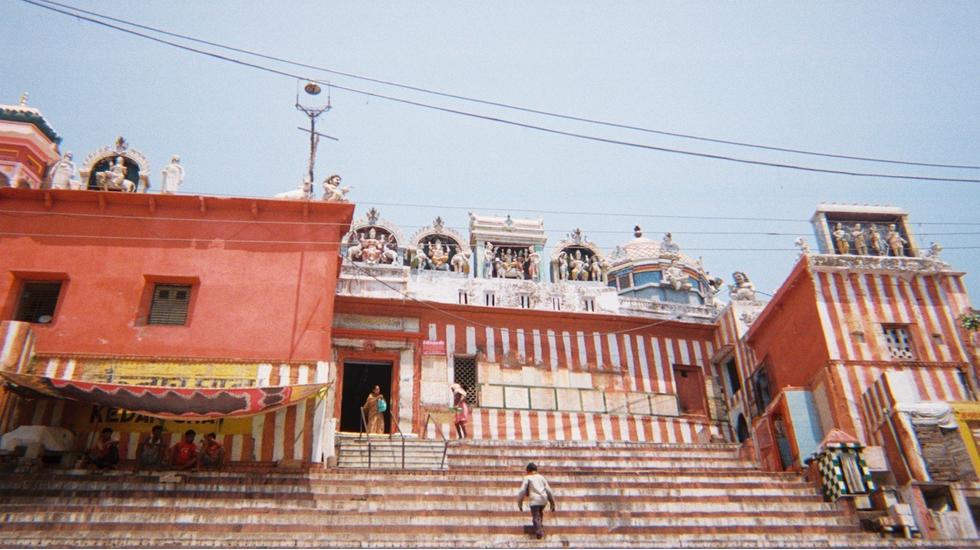 We We arrived in India one morning in May, and the overwhelming capital crashed over us like a wave. Speaking to locals, our plans to stay in the city for a few days were affectionately laughed at. We were advised to "do Delhi" in a day and then make a swift exit, so we booked a cheap flight to Srinagar in Kashmir on impulse.

It's not a state the British Foreign Office recommend travelling to - particularly given recent clashes between Indian forces and Kashmiri separatists - but things were more peaceful at the time. It was surprisingly cool and we were welcomed onto a houseboat on the Dal Lake with steaming cups of kahwah, a green tea infused with cardamom, cinnamon and saffron. It's a magical place, with entire communities living on platforms built in the centre of the lake.

The following morning, we began a day-long Jeep-ride deep into the Himalayas, stopping at roadside restaurants, or dhabas, for piping-hot vegetable samosas and sweet, sticky jalebis. In three days, we'd gone from a bustling, dry capital, to verdant slopes and snowy peaks via a cool, breezy lake. As night fell, we ate vegetarian curry in our tent, cooked on the spot by Amin, our Sherpa. For pudding, we devoured juicy mangoes, tearing the skin with our hands and eating the flesh straight off the stone.

The next couple of days were spent hiking across the foothills of the mountains with our nomadic guide and reliable donkey. All of the seasons were delivered within an eight-hour trek: intense sunshine, cutting winds and the crunch of snow underfoot. We passed makeshift houses, where women and children beckoned with fresh chapatis and spicy chai. These are herding families, who arrive in the mountains with their cattle every spring, heading to green pastures revealed beneath the thaw. They re-build their houses - wiped out by winter weather each year.

It took nearly 40 hours from the Himalayas to India's "spiritual capital" of Varanasi. The journey included a bumpy drive along hairpin mountain bends and an extremely delayed overnight train. At the other end, we found ourselves in a new, scorching hot world. Vehicles can't enter the city's winding alleys, so finding our hotel felt like searching for the centre of a maze - one that was alternately scented with potent incense and cow dung. Often, we'd turn down a street only to find a huge white beast blocking our way and would have to find another route.

Wandering along the River Ganges at the edge of the old city, we passed a burning ghat, where over 200 bodies are ceremoniously cremated each day. Nearby hospices mean that Hindus from all over the country travel to Varanasi when they are nearing the end of their life, so that their bodies can be burned on the river as soon as they pass away. Some families bring their deceased on trains to do the same, while others bring ashes to scatter them in the water. It's the most sacred funeral ritual in Hinduism, and you can tell by the number of people who gather here.

We took a rowing boat out at dawn and watched Varanasi come alive along the riverbanks. Pilgrims travel hundreds of miles to bathe here. Children splashed and laughed in the shallows, while others solemnly sunk themselves beneath the surface. That afternoon, we had cooking and yoga lessons with a local family, learning how to make a fried Indian snack called pakoras, as well as simply how to breathe properly. The giggling daughters hennaed flowers all over our hands and piled bangles onto our wrists. That evening, we sat on the steps of the main ghat and were soon surrounded by others doing the same, as hundreds arrived to watch Gange Aarti, a ritual to Shiva. Five Brahmans danced with fire while chanting mantra and we were engulfed by heady incense, all our senses entranced by the ceremony. At the end, locals sent tea lights and flowers floating across the water.

Jaipur seemed to have yet another identity. We'd heard fantastical tales of patterned textiles, ornate trinkets and fragrant food - and the bazaars did not disappoint. Intense colours left imprints on our eyes. We went to Hawa Mahal, a paradigm of Jaipur's Hindu architecture and famous pink stone and made a mandatory visit to the Amber Fort, a monumental palace sitting above a lake and surrounded by sandy peaks.

We also visited Jantar Mantar, an astrological garden in which Maharaja Jai Singh II built huge contraptions to measure the movements of the heavenly bodies. The observatory houses the world's largest stone sundial, which can measure time to an accuracy of two seconds.

Following a night back in Delhi, we took the bus to the Le Corbusier-designed city of Chandigargh. Turbo winds whistling through the windows made my face numb as I watched the scenery transform: rice fields morphed into townships and built-up areas filled with dhabas and garages, then back again. A highlight of Chandigargh's is the 25-acre Rock Garden. From about 1951, a road inspector called Nek Chand carried piles of rubbish and debris from the building of the city into a wooded area, where he built himself a secret kingdom. He never expected his miniature world of figurines and murals to be discovered - let alone become one of the most popular tourist attractions in India.

Our penultimate stop was Amritsar, home to the holiest site of worship in Sikhism: The Golden Temple. All day, every day, volunteers cook meals in the temple's kitchen, which are dished out to pilgrims and visitors of all nationalities and faiths who line up outside. Travellers can stay in nearby hostels who rely on donations in designated boxes. One evening, we took a group taxi to Wagah to watch the famous Attari border closing ceremony. Each day, a host of military traditions (including some seriously high kicks) take place before the lowering of the Pakistani and Indian flags. Hundreds of people on the Indian side of the border waved flags and cheered at the top of their lungs.

Our final days were spent relaxing back in the mountains in Dharamsala. Thinking back to the days in Srinagar, it felt as though we'd come full circle. The air was cool and fresh. We walked to the Bhangsu waterfall and visited the Dalai Lama's temple, Tsuglag Khang. In 1959, India's Prime Minister allowed him and other Tibetan exiles to take refuge here. We marvelled at the incredible debating style of Buddhist monks, who step towards their interlocutor, clapping emphatically when making an important point.

I thought about them as we ran through a monsoon to catch the 12-hour coach back to Delhi. They were so different from all the other people we'd met along the way: Hindus, Muslims, Bahā'is, Sikhs and Buddhists; shepherds, Sherpas, families and entrepreneurs. We'd seen Brahmans, burials and military routines, and experienced dry heat, humidity, snow, rain and sun. To this day, I still can't quite believe how diverse a nation India is; in three weeks, I felt like I'd travelled a whole globe of its own.