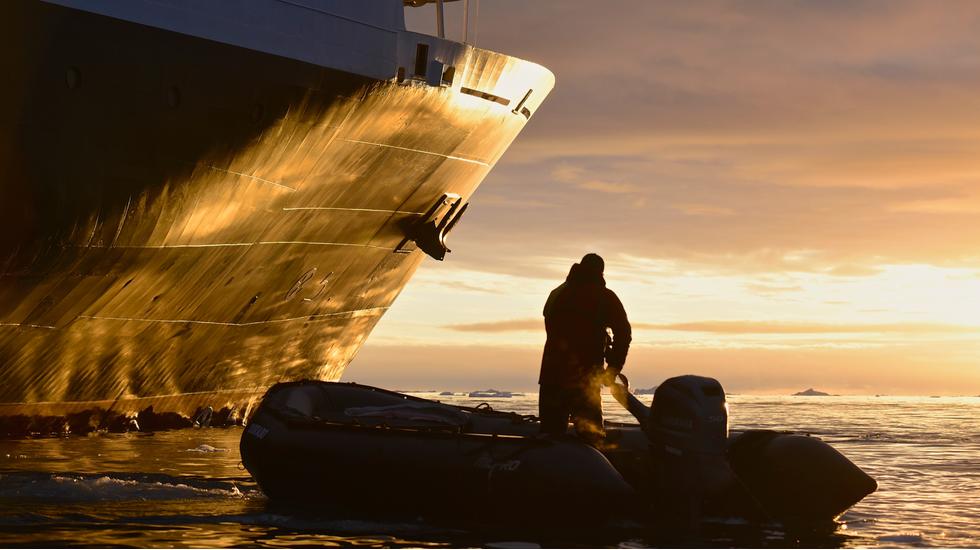 The The Northwest Passage was sought for centuries. In pursuit of a time-saving sea route from the Atlantic to the Pacific through the waters of the Canadian Arctic, scores of mariners returned home baffled, or perished as their ships were trapped or smashed up by the relentless ice.

In 1845 British explorer Sir John Franklin attempted the passage with a crew of 129, sailing from England on HMS Erebus and HMS Terror. The ships became ice-bound and had to be abandoned before sinking without trace. The men sought a route to safety across the frozen Arctic on foot. Every one of them died in the endeavour.

It was not until 1854 that Orkney-born explorer and surgeon John Rae completed the puzzle, discovering the last portion of the Northwest Passage and learning the fate of Franklin's expedition. Rae met Inuit hunters who told him they'd seen two ships stuck in the ice, that the men on board had abandoned them, and that the ships had foundered near King William Island. But the ships were never located, and over the years the sea and ice pushed them further south under the water.

For 169 years people searched for Franklin's ships until they were finally located; HMS Erebus in 2014 and HMS Terror in 2016.

I was on Adventure Canada's 17-day expedition cruise, Out of the Northwest Passage, on which we would pass the locations at which Franklin's expedition ended, as well as experience the Canadian Arctic. Extending nearly 1.5 million square kilometres, it's an adventurer's paradise; icy and treeless, but rich in history, culture and wildlife, with stunning views that few humans get to see. Our expedition was to take us to its heart.

The winter's first snow fell around us as our journey got underway. We'd just received the historic news that Franklin's ship Erebus had finally been located, kilometres further south than the point reported by the Inuit hunters all those years ago. And we were about to sail right over the top of where it sat on the sea floor, apparently in good condition.

It was around 2am, the wind screamed down the water as I stood with explorer Milbry Polk, on deck in the dark, whisky in hand, to toast Franklin and his lost crew with a drop offered to the sea, as we sailed over the spot where Erebus lay beneath us.

Our adventure had started in Edmonton, where we boarded a chartered flight to Kugluktuk, an Inuit community at the mouth of the Coppermine River on the Coronation Gulf. There the temperature hovered around two degrees celsius as we transferred in Zodiacs (inflatable boats) to our ship. A trustworthy and comfortable vessel, the Ocean Endeavour carries 198 passengers and can explore the Arctic during the summer months, weather and ice dependent.

Franklin sailed east to west in search of the Northwest Passage, but we were travelling the opposite way. We knew where we going, after all. Our route would take us through the Bellot Strait, the narrow channel separating the northernmost tip of continental North America from Somerset Island, to Beechey Island, across Baffin Bay, and then down Greenland's west coast.

We sailed through the night, along the Queen Maud Gulf, past King William Island and then through the Simpson Strait towards Gjøa Haven, where the first person to reach the South Pole, Norwegian explorer Roald Amundsen, honed his survival skills.

In the Inuktikut language, Gjøa Haven is called "Uqsuqtuuq", meaning a place with plenty of blubber. Amundsen was stranded here from 1903 to 1906 and learnt the Inuit ways that helped him to beat Captain Robert Scott to the South Pole in 1911.

Our first landing was at Anderson Bay, where we surfed ashore on Zodiacs in a biting wind. The land was flat and boggy, but it felt good to be trekking in the fresh Arctic air, and we found interesting fossils, including sea fans and coral.

Then a storm let rip, with winds whipping up to 45 knots (83kph), and huge waves throwing our ship about like a toy. Our planned landing at Gjøa Haven was cancelled. It was bitterly disappointing but as our leader, Jason, explained: "This is an expedition, and things can change at the last minute in the face of ice, wind and snow - or the presence of a polar bear."

The old adage "safety first" has never rung more true; the guides had to make hard decisions and convey them to our group of excited passengers who were eager to go ashore. The storm raged for two days as we continued north, keeping watch for bears, walrus and whales. Less ice due to global warming means that whales can travel further north, and are becoming more common in the Arctic, which is warming twice as fast as the rest of the earth, with an impact on the whole planet's climate.

At Beechey Island we spent the night anchored in Erebus and Terror Bay (named after the ships) and went ashore the following morning. It's a chilling place where we were greeted with snow a metre deep.

Franklin's party overwintered here and wooden headstones mark the graves of three of his men. The piercing wind ripped across my face as I trudged through the snow to the graves, and the ruins of Northumberland House, a small structure that had been built from salvaged timber by a search party looking for Franklin, in case he and his lost party might find shelter there.

Back on board, the following morning we were woken by news of a polar bear on an ice floe ahead of us. It was a thrilling sight watching it leap across the ice, and then dig a hole and curl up in a ball for a snooze.

Vast areas of pack ice threatened our landing at the Inuit community of Arctic Bay, at the top west side of Baffin Island, but we made it to the tiny, picturesque town and met some of its inhabitants, many of whom still hunt in the way their ancestors have for thousands of years, while also making use of the sports facilities and internet access in the local community centre.

Throughout that night we broke through thick ice on our way through Lancaster Sound. It banged and bumped against the ship's hull as we slowly nudged through it. I wondered just how much battering the ship could take, until we exited safely, just as the sun was rising. We sailed along the shore of Devon Island, with its intimidating cliff faces, to the derelict outpost village of Dundas Harbour. When the call to go ashore fed through the speaker in my cabin, I was well rehearsed, and quickly threw on my warm layers.

I slogged through more deep snow to abandoned, dilapidated wooden houses, where an old stove, decaying arm chairs, tin cans, a sewing machine and a cast-iron frying pan were some of the rusting items lying around. Winter here must be tough. A historical report speaks of one resident who had to fight off a walrus, and then accidentally shot himself in the head.

We continued north into the wildly windy Smith Sound and over to Greenland, the world's largest island, and home to one of the Arctic's hardest places to reach, the community of Qaanaaq. Smith Sound was the main route for explorers searching for the North Pole. We traced their routes as we approached Qaanaaq down a long fjord between spectacular towering cliff faces. We sailed alarmingly close to wondrous icebergs, then anchored while we waited for a break in the weather. It never came, and so we sailed away.

A typical example of relatively ordinary life carrying on in the most inhospitable of situations was Ilulissat (Iceberg), a town at the mouth of the Ilulissat Icefjord. It's a UNESCO World Heritage Site, where we cruised in our Zodiacs to appreciate the massive icebergs, then visited the bustling town, with its museums, cafés, craft shops and busy fishing harbour.

My journey drew to an end as our ship sailed towards Sisimiut and down a long fjord to Kangerlussuaq, Greenland's primary flight hub, where we disembarked and transferred to the airport.

It felt uncanny to be heading back to my familiar world with my head and heart full of the wild, intimidating and inspirational beauty of the far north. Magnificent scenes from its frozen yet ever-changing landscapes replayed in my mind's eye and will long endure in my memories - how long the ice will last is another story.

Discover More
All at Sea: Get on Board with Boat Travel
Read now