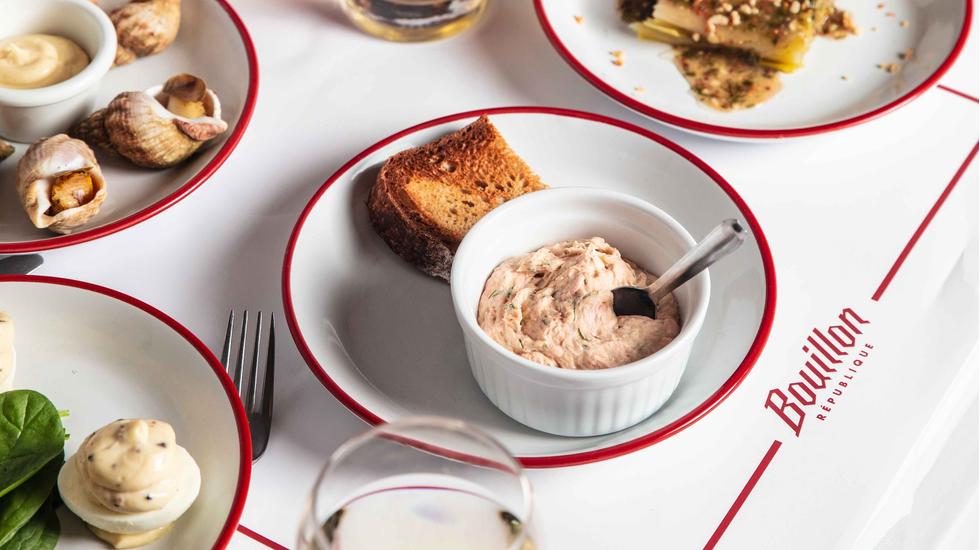 The The weather in Montmartre is warm, but not roasting - it's a "wear a T-shirt and maybe bring an extra layer just in case" kind of day. Despite all the Gallic sunbeams and the chirpy cerulean sky, a large huddle of people on the street are getting tetchy. They're checking the freckles on their wrists for where their watches should be and tutting loudly to let everyone around them know that they are, in fact, rather cheesed off. Others in the swarm are standing, arms folded, with more resigned expressions of acceptance on their face. "At least it's moving fast," says one man, evidently hungry for steak haché and freshly fried frites. That man is me. I've taken the Eurostar to Paris to join the queue.

The line is about 25-people deep and, although my partner and I have been waiting for 30 minutes already, we've made a promise that we're not going to leave until we've had a long lunch filled with cheap wine and even cheaper laughter. A little bit of patience is nearly always required when you're looking to get a table for lunch in a food-obsessed city like Paris. But the restaurant we're queuing for isn't a brand-new swanky bistro, a hot natural wine and small plates spot, or an upmarket brasserie opened by a big-name chef: it's a bouillon.

You'll likely recognise a "bouillon" as being one of those delicious cubes of concentrated flavour that you revive with hot water and throw into risotto. The word in this instance, though, refers to a traditional style of French eatery where that titular broth is served up alongside a selection of other humble eats. The concept was dreamt up to provide blue-collar workers with quality food at an affordable price, offering a simple menu of bread, beef, bouillon and wine that was served to customers at a breakneck speed. The price and pacing of a meal at a bouillon meant that just about everyone could afford to spend their time and money there during their lunch hour. According to food historian Jim Chevallier, it seems "most likely" that the first bouillons existed from 1838 to 1855. Aimed at appealing to the masses and fitting in as many punters during service as humanly possible, it's a model that proved both profitable and popular for many years after. Sources claim that as many as 250 bouillons could be found in Paris at their peak, around 1900.

Although they were once hugely popular - and were in many ways the world's first successful chain restaurants and a predecessor of the globalised fast-food franchises we know today - the bouillons eventually found themselves replaced in France by sexier bistros and brasseries. A hearty portion of pot-au-feu was suddenly considered too basic or provincial for a lunch or dinner. Parisian gourmands, and a growing French middle class, found the concept of communal dining to be passé and began to demand more glitz and glamour from their restaurants. It's notable, in that respect, how the UK is home to various self-styled bistros and brasseries but not many (if any) bouillons. Having weathered that fallow period, however, the bouillon and canteen-style dining in general have made a roaring return to the consciousness of diners in recent years.

The soup was sweet, rich and topped with a heavy toupee of melted cheese

Brothers Pierre and Guillaume Moussié are the men responsible for opening Bouillon Pigalle and ‎Bouillon République - two restaurants leading the way in the bouillon renaissance. Knowingly styled after its namesake but done so with an added splash of panache, Bouillon Pigalle opened in 2017 to great critical and commercial acclaim. République, on the other hand, is still relatively box-fresh, following its opening in Autumn 2021. It was Bouillon Pigalle that I found myself plonked out front of for over half an hour, waiting for a meal that I was praying would be worth it. Spoiler alert: it was.

We started with a bowl of soupe à l'oignon and an accompanying country-style terrine with toast and cornichons. The soup, as expected, tasted like the purest essence of onion. Reduced down to an almost treacly consistency, it was sweet, rich and topped with a heavy toupee of melted cheese. The terrine, studded with gloriously gelatinous and miscellaneous chunks of meat, was just as luxurious and rustic. Both plates helped to set the tone for the hefty portion of saucisse au couteau with potato purée that followed. Had we ordered too heavily for a hot, spring day? Absolutely. But it all tasted so good that we had no choice but to keep eating and push on through to the restaurant's star dessert: a profiterole split down the middle and stuffed with vanilla ice cream. Lathered in an almost bitter chocolate sauce, that dish tied the bow on a hearty meal that tidily summed up what bouillons are all about.

The ornate exterior of Bouillon République, and a bowl of soupe à l'oignon. | Photo credit: The Travel Buds Studio

It's the heart and soul that has been injected into both Pigalle and République that prevents them from existing in the same gentrified sphere as a hipster revival of, say, a pie and mash shop. The price point helps, too. Both of the Moussié brothers' restaurants specialise in affable French food served at a budget-friendly price from noon until midnight. That means oeufs mayonnaise for around £1.90, steak frites for £10 and a slice of tarte citron for £3.35. To get access to that standard of cooking in a similarly food-centric city like London or Copenhagen, you'd probably have to pay twice as much for the trouble. More than just the price of the food, though, it's the quality of the dishes and the scale and speed at which the chefs crank them out like clockwork that makes a meal in a bouillon so impressive.

Pigalle has 300 covers; République, 450. Neither restaurant takes bookings, yet there's nearly always a line anaconda-ing outside both at all times of the day. They're also, I should note, far from the only bouillons in Paris today. As well as the newer kids on the block, there are also older establishments like Bouillon Julien, near Strasbourg Saint-Denis, and Bouillon Chartier, in Montmartre.

The latter was founded in 1896 as a workers' cafeteria and is still open 365 days a year, having been given a quick lick of paint, a grander interior and a somewhat more up-to-date menu since its opening. Chartier's simple approach has proven such a hit that in 2019 they opened a second restaurant, in the Montparnasse area of Paris and, in April of 2022, a third, opposite the Gare de l'Est. All Bouillon Chartier outposts employ the same no-bookings system as the Moussié brothers' bouillons, and boast equally impressive queues that move quickly thanks to the efficient service you receive once you're inside.

A trio of desserts at Bouillon Pigalle. | Photo credit: The Travel Buds Studio

You won't ever feel hurried during your meal at Bouillon Chartier, but you'll always be well aware that the staff are not mucking around. Get in, eat well, drink the house wine and get out. The bill will even be scribbled in biro right on the paper tablecloth in front of you. It's a rinse-and-repeat formula that works in the restaurants' favour and means that tables are turned at an impressive clip. It's a bit like dining in a school canteen. Except, of course, that the colour of the room isn't depressingly grey, there's no danger of someone calling you a loser for doing your history homework and you're far more likely to spy a calf's head in sauce gribiche on the menu.

They might not be everyone's cup of tea but - having spent the past couple of lonely, pandemic-addled years craving the rush of a packed restaurant where you're literally forced to eat elbow-to-elbow with complete strangers - my plea to the jury (and you, the reader) is that the world needs more big, cheap eateries. Viva le bouillon.

The no-reservations policy means that you'll nearly always have to wait to get a table here but it's more than worth it. The food is well-priced (read "cheap") and the menu is well-stocked (read "big"). Come here when you want to eat like a king on the budget of a court jester.

A big, swanky dining room that feels like somewhere Oscar Wilde would be well at home is one of the main selling points of Bouillon Chartier. The other main selling point is the excellent food: plates of garlicky escargots and rustic choucroute. The food is impressively French, the vibe is killer and you'll leave with plenty of change in your pocket.

Located in the beating heart of the French capital's Latin Quarter, Bouillon Racine is a rip-roaring joint spread over two floors. It's all a bit extra and the interior is about as art nouveau as it gets, but you shouldn't let that distract you from the quality of food on offer. This is definitely one to check out if you're a sucker for impressive dining rooms.