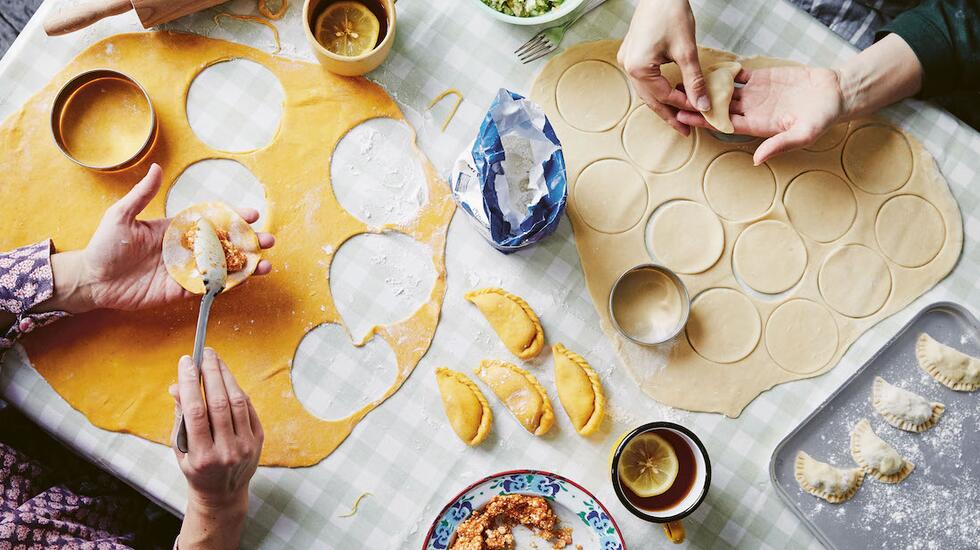 My My first memory of Polish dumplings is making them in my grandma's tiny, dark kitchen in a pre-war building near the Old Town, Warsaw. Those apartments were built so you could move from one room to the next in a circle and the kitchen was right in the middle, with no natural light except for a small window at the top of a heavy door. It felt hermetic and nest-like. Although no one would want to cook in a kitchen like that, it has been imprinted on my mind for eternity, as if it were a time capsule. I remember that the job Babcia Halinka gave me was to cut the kopytka dumplings ("little hoofs") with a butter knife, which seemed like an incredibly important and slightly dangerous undertaking. I took the dumpling making very seriously then. Nowadays, I have more fun with it.

Pierogi are considered something of a national dish in Poland and the world over. They are parcels of thinly stretched dough stuffed with either meat or vegetarian fillings, depending on the time of year, the region you find yourself in and the occasion.

For the past two years, I have been researching and writing my new book, Pierogi, all about the world of Polish dumplings. The idea was to travel around Poland seeking out regional dumplings and bringing them to a Western audience, preserving traditions that are in danger of getting lost in time and space. The pandemic put a stop to my travel plans, so the research looked rather different, but the internet, my memory and old cookbooks proved to be more than sufficient dumpling travel substitutes.

I reached out to my community and found that people were ready and willing to not only share their own Polish dumpling memories, but also to go out of their way to procure old recipes from their grandparents and aunts who did not have the internet or didn't use it. I was touched by their generosity. From the Masurian Lake district, in the north-east of Poland, came a recipe for special Easter pierogi filled with egg, which is eaten with a fermented rye soup. From one of my favourite places, the eastern city of Lublin, I received the most delicious recipe for sweet buckwheat and twaróg (white cheese) pierogi. From Wrocław (via Jakarta) came an idea for green kopytka that were big in size, full of greens and served with sauerkraut.

A bowl of Easter pierogi, left, and a street in Zak's hometown of Warsaw.

The history of pierogi in Poland isn't well documented, but we do have a saint associated with the food. Święty Jacek is rumoured to have brought pierogi from the east - what is now Ukraine - where he's said to have tasted them in a convent. Today, a prayer to Saint Jacek evokes pierogi in a hope of staving off any hunger. This tells us that pierogi most certainly started out as peasant food. In Poland's first cookbook, Compendium Ferculorum, written by a chef of the noble Lubomirski family at the end of the 17th century, there are only three mentions of pierożki, which are filled with rose and the like, as befits nobility.

It seems as though each country has its own version of pierogi and, while there are legends of how these types of filled dumplings began in China or Italy, I personally believe that, once, women all over the world (who have historically spent most time in kitchens) who had flour, water and fat would have experimented to create a dough, which they could then fill with leftovers. To me, this is the most plausible, undocumented, history of pierogi.

In Poland, pierogi were therefore a part of the colourful, joyous world of folklore and the domain of Polish peasants before they became an emblem of Polishness throughout the country and, now, in our globalised society, all over the world. It was fitting to also explore the modern aspect to the Polish dumplings. I wanted to bring the joy of pierogi to everyone, even those that are vegan or gluten intolerant, while preserving their essence.

This Warsaw bistro pairs a nostalgic menu of handmade pierogi with playful, modern interiors. Blue terrazzo table tops, coral neon signs and graphic wall murals from illustrator Ola Sadownik, plus a cobalt kitchen counter, provide the backdrop to a menu of classic 60s Polish favourites - sour rye soup, herring in linseed and hemp oil and, the star of the show, golden pierogi served with a dollop of sour cream.

Prepare to be paralysed by the choice on offer at this Gdańsk joint, whose menu is a celebration of Poland's pierogi culture. Take your pick from a selection of baked dumplings, fried dumplings, buckwheat variations and sweet dessert offerings, stuffed with cabbage and mushroom, spinach and sundried tomatoes, wild boar meat, spicy chorizo, salmon paste, blueberries and even Oreos.

Pierogi: Over 50 Recipes to Create Perfect Polish Dumplings by Zuzu Zak is published by Quadrille (£18) and is available to purchase at bookshop.org. Follow @zuzazakcooks on Instagram.

Discover More
Rocking the Kashmir: Dishing Up a Flavour of the Himalayan Trail
Read now