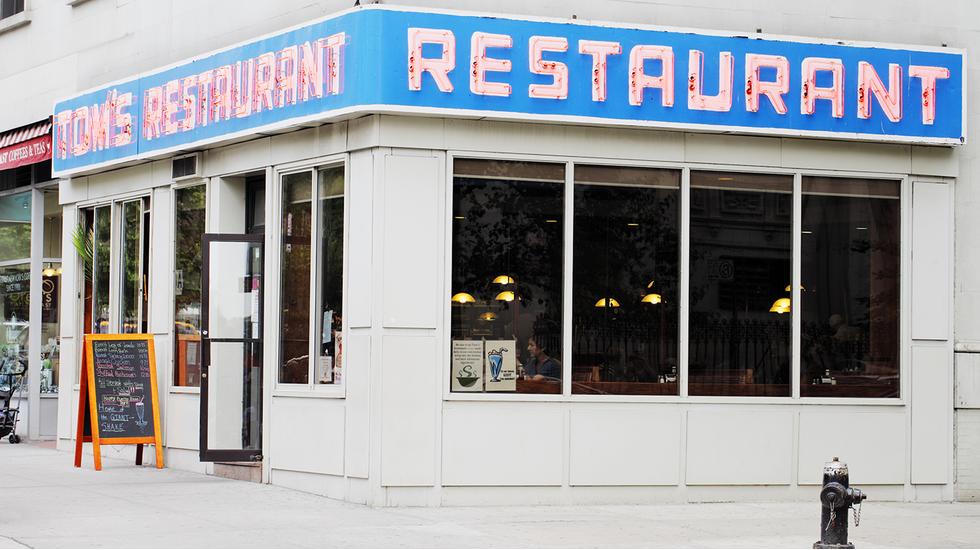 Hair Hair metal bands, jazzercise and shoulder pads; there's no era more defining - or glamorously garish - than the 80s, and the decade's cinema scene is no exception. It's always fun to recognise a real-life setting on the silver screen, if only to exclaim "I know that place!" every time you watch it. Here's a round-up of our favourite on-screen places lifted straight from the film rolls of the 80s most memorable movies.

"Yes, Yes Yes!" There is no scene in rom-com history more iconic than Meg Ryan's orgasmic exclamations in the middle of a busy Katz's Deli. Established as a NYC landmark long before the film debuted, the kosher-style deli has been serving up its famous pastrami on rye since 1888. On the corner of Houston and Ludlow Street, Katz is typically Lower East Side, fostering a low-key vibe with retro-style interiors that haven't changed much since Harry and Sally popped in for lunch. Signposted all over, you won't miss references to the cult classic, although chances are you'll see the line long before you reach the deli. A testament to old-school New York, Katz is an icon with or without Harry or Sally but all the better for it. And yes, we'll have what she's having.

Few can forget Dustin Hoffman in drag as Dorothy Michaels in Tootsie. The curly wig, chiffon blouses and fake appendages were the perfect precursor to Robin Williams’ Mrs Doubtfire years later. There is no scene more memorable than Dorothy’s accosting of their unsuspecting agent in an outlandish scene played out against the unlikely backdrop of the Russian Tea Rooms (a long-standing NY establishment founded by members of the Russian Imperial Ballet in 1927). Today the ornate grand dining room welcomes an array of actors, writers, politicians and executives to talk business, politics and fine art over high tea and Moscow Mules (for which they have the finest vodka selection). Squeeze into a booth with a mate and order Dottie’s frou-frou drink – “Dubonnet with a twist!” Make that two, please.

Do as Bux Fox and get a taste of the high life at this New York institution. The former Prohibition-era speakeasy has been credited with spawning the 80s “power lunch” where deals are made over expensive food and copious amounts of alcohol. Since Gekko and Fox talked money over steak tartare, the swanky lounge has seen many signet-ring-adorned hands shaken in their leather booths. The club has held on to its reputation as a hub of sophisticated fun and old-school pizazz – chequered paper tablecloths, sports paraphernalia (including John McEnroe’s smashed racket) and the iconic 35 mini jockeys atop the entrance railings add quirky touches on the institutions otherwise retro glamour. As you would expect, service here is second to none, so take a page out of Fox’s book and order off-menu – chances are they’ll make it for you. Everyday the lounge is adding to its Rolodex of celebrities, diplomats and deal-makers, but before you sashay through the iron gates, do as Gordon Gekko says and “buy a decent suit”.

Tom’s Restaurant served only as the facade of Seinfeld’s on-screen diner, with interior shots of Monk’s Diner filmed on a Los Angeles soundstage. Nonetheless the distinctive red and blue signage atop the corner diner is indisputably known as the “Seinfeld gang hang”. So much so, when you look at it from across the road you really can’t help but hum the show’s slap-bass theme. Still, Tom’s owner, Mike Zoulis, hasn’t given into to the tourist trap – clientele remains 80 per cent New Yorker a large majority of that Columbia University students on lunch break. Instead of sitcom memorabilia, inside you’ll find your standard NY greasy spoon, 75c coffee and no-frills food served over the counter or in one of their padded boots. Bring along your Elaine, George and Kramer to chat about absolutely nothing over big salads.

The self-proclaimed “Top Gun Bar’, Kansas City Barbeque certainly leans into its cinematic claim to fame but who can blame them when it’s the setting of a scene as good as Goose and Maverick belting out “Great Balls of Fire” on the piano – an artefact still standing today. The inconspicuous sports-bar-cum-restaurant was spotted by a Paramount Studios location scout when he popped in for a beer, before bringing along the film’s director Tony Scott to sign the release, and the rest is cinematic history… The restaurant is plastered in Top Gun memorabilia, a young Tom Cruise adorns most inches of wall, with movie posters and stills from the film framed side-by-side. A patio wall is painted proudly stating “Top Gun Sleazy Bar Scene Filmed here July 1985”. Gaudy, maybe. Great, definitely. While you may come for the Top Gun link, you should stay for the food. Opened by Kansas City natives Martin and Cindy Blair, the sports bar takes all things barbeque very seriously – their baby-back ribs are as delicious as they are messy.

Ferris Bueller’s Day Off changed how kids saw bunking off school. Ditching was no longer achieved with a few fake coughs; it was an art-form and an opportunity to experience the world. A whimsical scene (largely out of place in Bueller’s otherwise raucous day off school) the film’s venture into the Art Institute of Chicago harbours the film’s most touching moments. For an art tour à la Ferris hit all the major movie spots including Hopper, Kandinsky, Picasso, Ganguin, Pollock and Matisse – the works were also director John Hughes’ self-professed favourite pieces, and are poignant with or without the Ferris context. Feel out your existential crisis in front of Seurat’s “A Sunday Afternoon on the Island of La Grande Jatte” in a Cameron-esque manner or sneak a kiss with your main squeeze in front of Marc Chagall’s “America Windows” in a typical Sloane-Ferris move. Who said playing hooky can’t be educational?