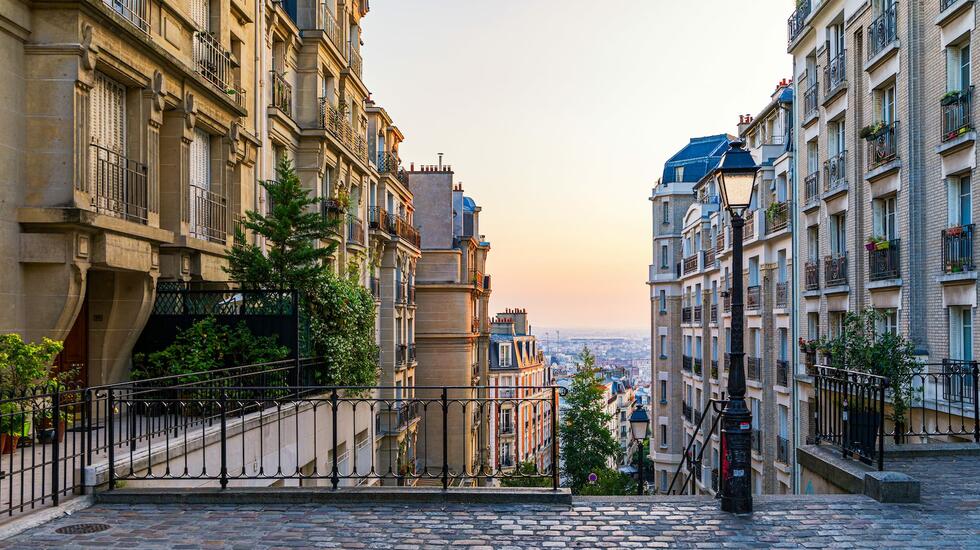 Once Once a country village tucked into Paris' verdant rural skirts, Montmartre's distinctive identity sets it apart from the rest of the French capital. Though officially part of the city since 1860, most Parisians still talk about this historic area's twisting roads as if they're part of a different place altogether. Founded by the Romans - who placed a temple on the hill where the Sacré-Coeur Basilica now stands - Montmartre of old was known for its vineyards and gypsum quarries. Then, hundreds of years later, it became a local village, dotted with windmills (which you can still see).

By the 1800s, however, the dinky village had metamorphosed into a centre of country culture, first as the heart of the Paris Commune, the revolutionary uprising following the end of the Prussian occupation in 1871, and then as the birthplace of impressionism and cubism. Starry names like Monet, Renoir and Picasso congregated here during the Belle Époque; in the early 1900s, it was a hedonistic den of art and parties, centred around subversive café-cabarets.

Today, the insalubrious edges have dissipated, but the district's soul remains - just note that you'll have to sidestep the Eiffel Tower mug stands and beret stalls to find its authentic self. Skip past the touristy kitsch on the south side of the hill and follow disgruntled Parisians through the crowds to the 18th arrondissement's bohemian heart. East of La Butte and behind it, to the north, sit a sloping maze of narrow streets lined with local businesses, from wine shops and Greek eateries to hidden teahouses and African boutiques. Below, we'll show you the best way to experience the area like a Montmartrois.

Hidden in a private mews off the prestigious Avenue Junot, Hotel Particulier offers a luxurious and romantic stay. The house was once owned by the Hermès family, and the feel is still very much like staying in a fabulous private mansion (note: with a price to match). Each of the five newly renovated suites has a unique design, with eccentric touches like leopard-print wallpaper, and flamboyant marble-clad bathrooms. It's a sumptuous hillside bolthole.

Terrass Hotel, located just off Rue Lepic, in the heart of Amélie territory, was originally opened in 1911 and has held onto some of its most beautiful art deco features, such as the curved glass awning at the front entrance. The property was given a head-to-toe makeover a few years ago, becoming a favourite with visitors and locals alike. Don't miss the rooftop bar, which has panoramic views over the city, including the twinkling Eiffel Tower at night.

While this address is not technically in Montmartre, but tucked away in the nearest suburb to the north, Saint-Ouen, we're counting it. Heading out of the area proper means grabbing a chic room for less than in most hill-hugging hotels - but you're still a minute's stroll from Montmartre's heart. Rooms at this fresh-faced stay feature super-comfy beds and mid-century-inspired furnishings, with quirky, humorous touches contrasting with the building's industrial architecture. In warmer months, you'll want to make use of the huge courtyard gardens and outdoor pool (In Paris? Zut alors!).