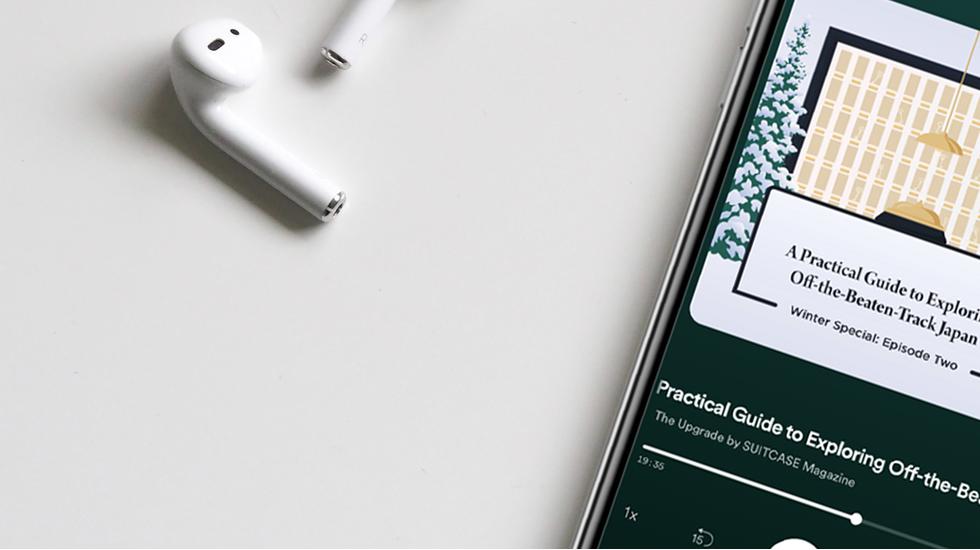 Never Never enough newness on Netflix? Switch the telly off and press play on one (or all!) of the 22 phenomenally engaging podcasts below. Between National Geographic scientists taking on Socotra's unsolved mysteries, and the real history behind Donna Tartt's Secret History (plus everything in between) - we've got curiosity covered.

A recent-ish find, this is the podcast we're listening to when we're after thirty minutes of informative escapism. The premise? The snippets you might overhear whispered straight from the lips of fabled explorers up and down the corridors of Nat Geo HQ. Think stories about the secret lives of sharks, science in Socotra, and life under the sea with Jacques Cousteau. Co-hosted by National Geographic editor-at-large Peter Gwin and executive editor of National Geographic's History magazine, Amy Briggs, each episode is an illuminating deep-dive into an obscure topic you'll think about long after the closing credits.

The Upgrade by SUITCASE Magazine

Ok, call us out. This is a shameful plug but The Upgrade is the podcast for globally minded travellers. Unpacking some of SUITCASE's best bits, The Upgrade podcast brings a little escapism and travel inspiration to wherever you're listening. With season one all wrapped up, we've been busy plotting and recording the second. Tune in as we shift gears on the conversation around slow travel, spotlight lesser-known destinations and share the zany new hotels where we're checking in. Plus, we'll be joined by the people changing the way you travel, including pioneering hoteliers, artisans from around the world, record-breaking explorers and eco experts.

Created to celebrate and uplift women in the art industry, art historian Katy Hessel launched her podcast series off the back of her hugely successful Instagram account @thegreatwomenartists (which is well worth a follow). For her podcast series, Katy interviews leading female artists, art lovers and curators, probing their careers and finding out about the women who inspire them. Follow along for in-depth discussions around the must-see exhibitions across London - it's the millennial's answer to a gallery audio tour.

Once Upon a Time…at Bennington College

Donna Tartt's 1992 smash hit, The Secret History, is one of those feverish page-turners you finish quickly because you simply can't look up. In short, it's a novel with all the ingredients of a cult classic, think dissatisfied youths, murder and a storied university replete with rebels. Journalist Lili Anolik takes us back to the decadence of 1980s Bennington, where it all started for Tartt and her talented literary cohorts like Brett Easton Ellis (author of American Psycho) and Jonathan Leathem. Episode by episode, Anolik's caramel tones clarify the blurred lines between fact and fiction in Tarrt's magnificent tale.

The Business of Fashion

One for the entrepreneurs as well as the front-row fashion connoisseurs, BoF interviews some of fashion's highest flying creatives, explores trending topics such as the booming fashion resale market and, of course, covers the latest in coveted catwalk looks. Want to skip straight to the best bits? Start with the episode with Kim Jones, Artistic Menswear Director at Dior, who discusses leading Louis Vuitton's menswear revival along with the future of streetwear.

Getting Curious with Jonathan Van Ness

Completed the Queer Eye catalogue on Netflix? Move onto this podcast by positive-thought guru Jonathan Van Ness. Proving he's not just a dab hand at a blow-dry, he enlists industry experts to discuss hard hitting topics ranging from climate change to the US bail system in his weekly series. The wealth of information relayed combined with his willingness to explore new topics makes for an engaging listen.

Annual pilgrimage to the White Isle of Ibiza on hold? Get your hedonistic hit early with the official podcast from Pikes, which covers up-and-coming female DJs, Ibiza's spiritual history and insights into Seth Troxler's birthday party among a diverse topics. All this is mixed with anecdotes from Tony Pike's epic antics that are so vivid you'll feel like you partied with the legend himself.

Before you scroll down the roll call of episode titles, squirming and screaming that this is "just another true crime podcast", let us preface this with: it's not. Two journalists unpick the details of key cases, pivotal moments in politics and decade-defying scandals debunking the myths reported by the media. And yes, there's multiple episodes on the O. J. Simpson trial.

There Goes the Neighbourhood

All of us can relate to crippling city house prices and the conscious struggle between wanting to live in a flourishing "reborn" neighbourhood while harbouring the guilt that comes with seeing local residents losing their homes. Now in its third series, There Goes the Neighborhood unearths the issue of gentrification in Brooklyn, looks at the integral role that race plays and gives a voice to the people most affected. Download the series for a fascinating insight into Los Angeles is suffering from an identity crisis.

Producer Mark Ronson sits down with the impactful music-makers that have defined the beats of then and now in this addictive podcast based on famous FADER magazine cover stories. Ronson's encyclopedic knowledge of the music industry makes him a magnetic host, and the witty banter between him and his guests is both hilarious and illuminating. Pharrell, Big Boi, Kelis, Haim and a slew of other stars divulge the highs and lows of life on the road, behind the scenes struggles and the collaborators that keep their creative spark alive.

Credited with taking our make-up bags from grotty to glowing, Breaking Beauty reviews the latest hero products, fixes our skin routines according to the seasons, skin type and Mercury's position in the solar system, and interviews some of the industry's leading pioneers. Expect conversations with the founder of MAC Cosmetics, Urban Decay and Michelle Obama's skin guru.

If you've ever set foot in India, the opening moments of this podcast - which feature the narrator traipsing through thick jungle to the soundtrack of her own panting breath, followed by the clamour of rickshaws, trucks and rhesus monkeys - will bring you straight back to the country. This three-episode series narrated by the New York Times's Ellen Barry delves into the bizarre tale of the self-proclaimed Queen of Oudh, Begum Wilayat Mahal, and her children, Cyrus and Sakina. The family moved into the waiting room at a New Delhi train station in the 1970s, replete with servants, lavish carpets, luggage, and dogs. At its core, this podcast is a meditation on the deep trauma caused by India's 1947 partition, communicated through the story of one family's mysterious and ultimately heartbreaking unravelling, to the backdrop of the Delhi jungle.

We mainly tune in for the killer 90s references and the southern sass, but that aside it's refreshing to listen to a true-crime podcast that goes easy on the gore and doesn't get too deep. Plus, we're not left wanting to sleep with the light on.

Like attending a book club - without having to host or organise snacks - The Book Review reports the latest literary releases from both sides of the Atlantic, alongside fascinating author interviews and recommendations. Brought to you by The New York Times, this is a level up from the thriller beach-read you normally have stuffed in your bag.

Remember when scandalous so-called Anna Delvey tricked the Upper East Side into thinking she was a billionaire heiress? BBC Radio 4's Vicky Baker and Chloe Moss dig deeper into the scandal. Gossip Girl fans will be thrilled. XOXO.

We all have them. We return to them when we're sad, hungover or when we're about to board a 12-hour flight. That is, the stash of classic (and borderline trashy) movies that keep us going when we just don't know what to watch and can't face making a decision. This podcast is kind of like that, but instead of rewatching The Breakfast Club for the seventh time, a roundtable of industry experts rehash the details, share on-set stories and discuss what they would have done differently. Doesn't pique your interest? Quentin Tarantino's frequent appearances may well change your mind.

The girls behind the hilarious Instagram account @commentbycelebs bring you up to date with the latest Hollywood news, covering everything from the (possible) reunion of Brad and Jen and who Pete Davidson is now dating to a deep-drive into the world of Justin Bieber. If you can't keep up with the Kardashians (but secretly want to), this one's for you.

Have you heard George’s podcast?

Part drama, part spoken-word performance, part news and part music, this podcast by George Mpanga (aka George the Poet) podcast is absolutely brilliant. Eight episodes skip from unpicking the meaning of a drill track and covering the London riots to the glamorisation of violence. As five gold awards from The British Podcast awards testify, it's a cultural phenomenon.

Design devotees should already be au fait with Roman Mars's weekly series that probes into architectural influences without waxing lyrical about the greatness of bauhaus or the beauty of brutalism. Yawn. Instead, he takes on the everyday - if you stretch that to include Kentucky truckers and wax mannequins. Expect post-Pablo Escobar urbanism and thought-provoking conversation.

If you're new to plugging in to podcasts, start with this insanely addictive series brought to you by brilliant investigative journalists. The majority of the world has already caught up, so you'll have plenty of people to wax lyrical about the the painful yet beautiful life of John B. Best to block out a whole beach day to get through.

Haven't you heard the hype? The hilarious Receipts Podcast started in the DMs, is filled with filter-free chat and brought to you by a trio of strong, confident women who know how to keep it real. Really real. Like, "I work with my boyfriend's side chick" kind of real. It's pretty much like having your best friends gossiping in your ear.

There's probably never been a more apt time to listen to the cult classic than when you're missing your travels. Desert Island Discs has been on our airwaves for more than 75 years and hosted some 3,000 castaways, so we're pretty sure it'll last the length of your trip, never mind your flight, and have you covered should there be any delays. Even if you were stranded on said imaginary desert island, we doubt you'd run out of listening material.

This article was updated on the 17th of December 2022.