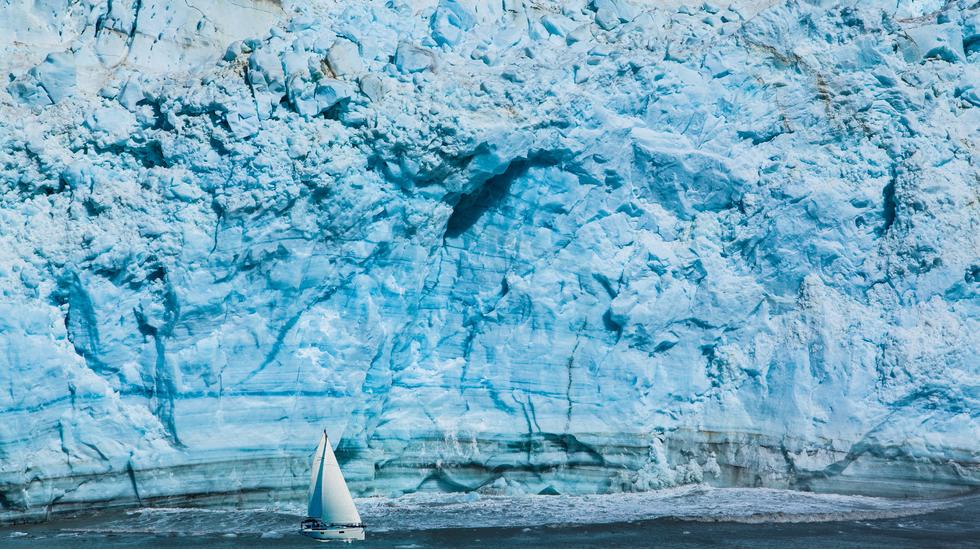 In her essay, Total Eclipse, Annie Dillard describes how seeing the eclipse made people scream. Scream, because for a moment, the universe was laid bare to them, and they grasped the speed at which everything was actually in motion, glimpsed a portion of infinity.

We were sauntering around the town of Ny Alesund, the northernmost settlement in the world, when all of a sudden, the sky lit up in a frenzy of green. We made sounds that were unrecognisable by genre but resembled a combination of a heave and a howl. The wind vibrated and the sky seemed to respond to our cackling, pseudopodic and multiplying. We had not conceived of anything like the northern lights before, not this alchemy of joy and terror anyway, and never this reaction of limbs flailing and pure, automatic floundering. In Arctic Dreams, Barry Lopez says that the Inuit have a unique relationship to fear: "It is a fear tied to their knowledge that sudden, cataclysmic events are as much a part of life, of really living, as are the moments when one pauses to look at something beautiful."

This year, I travelled to both polar circles: I sailed to the Antarctic circle in March and to the Arctic circle in October. What better way to escape the crises of Earth? What better way to think I escaped the crises of Earth, only to realise that the polar caps are the Earth's thermostat, regulating its temperatures, maintaining its heartbeat. I've grown up in a family of explorers, travelling to remote parts of the planet with insatiable curiosity. This was my ultimate voyage: it was the closest I could get to outer space. And yet, in these no-man's' lands, it was the places that contained the ghosts of earthly exploits that affected me: they countered the fear of the infinite with the comfort of human failure.

For a long time, the history of exploration to the edges of our world consisted of failed attempts and false conjectures. Until the late 1800s, Antarctica was referred to as terra incognita, while the Arctic was called terra nullius. Compasses were unreliable and measuring longitude at sea was deceiving. The mist was solid, and the combination of ice mirages and bursts of madness from the piercing cold led expeditioners astray. Ernest Shackleton, one of the pioneers of Antarctic exploration, described seeing a second sun in the floating ice-crystals: "It had the form of a wide halo with two mock suns at either extremity of the equator of the halo parallel to the horizon and passing through the real sun." These first impressions - erratic, unwieldy, often bombastic accounts from the journals of tired, frostbitten, delirious men - are an important basis for the scant scientific observations that would succeed them as research bases and tourism developed over the next decades. Even today, the poles are shrouded in hypotheses such as, 55 million years ago, they were tropical paradises, thrumming with bees and alligators or that they are, until today, host to alien bases.

The kind of people I met aboard the vessels were the kind of people that seem to have already lived a thousand lives, felt every emotion in the span of a day. The people that voyage such distances seem to be able to quip about the coins of ancient Rome in the same breath as they might identify an Arctic tern as it flies past en route to the Antarctic (one of the longest migrations ever conducted by-wing). These people seem at once foolish and wise, restless and grounded. Of course, this is not true but form part of the misperceptions that characterise the polar circles. The people who voyage here are distinguished by their willingness and resources to realize this journey, but are no more or less breathtaking or mediocre than anyone anywhere else. Similarly, the Arctic, from the Greek, arktikos, meaning bear, and Antarctic, meaning anti-arctic, are perhaps only antonyms in etymology, because, very quickly, they melt (quite literally, with climate changes first and most devastating effects here) into one, uncanny in their similarities and bound by ocean.

The Arctic and the Antarctic are everything of our imaginations: freezing, white deserts. But it was in two specific places, Deception Island on Antarctica and Ny London on Svalbard, where I experienced the sublime: that mixture of beauty and terror, at once.

I arrived at Deception Island, as if named as an invitation to poets. It has a circumference of 21 miles, shaped as a horseshoe, a barely open circle whose mouth is easy to miss. This liminal gap of 400m is called Neptune's Bellows, named after the gusts that blow through the narrow entrance. The black, ashy, volcanic sand beach, granulated lava, breathes out fumes from natural vents in the sand. Bull fur seals and elephant seals yawn, screech. The harpoon had been invented. The British claimed the island in 1908 and leased it to a Norwegian whaling company. 1.5 million whales had been harvested by the 1920s but by 1931, falling prices, excess costs to dispose of whalebone once their oil had been extracted, and new technologies made the base redundant. Now, the massive round rusted metal fuel containers look like Richard Serra sculptures. No deliberate imagination could conceive of as dystopic a scene as this. The war led to the buildings being burnt, fuel cans emptied. Frequent volcanic eruptions boiled the waters of Port Foster and the heat and sulphur stripped the paint from the moored ships. As if it were not hyperbolic enough, the 45 men that died whaling are buried behind the station, their cemetery is now shrouded in lichen, rotting wood, the occasional bone and the chatter of tourists. The volcano erupted several times in the 1960s and a mudslide excavated a lone coffin, that until today appears and disappears at a whim.

In Ny London on Svalbard, a similar story of a failed colonial extravagance forms a landscape of memory, loss and ruin. The Northern Exploration Company, under the guidance of English explorer Ernest Mansfield, set up a marble quarry in 1911 after five years of research and planning. An extravagant ground was set up: seventy men, heavy machines and equipment, even a steam engine. When they brought back their first load of fifty tons of marble to the mainland, the permafrost evaporated and the marble turned to rubble. Rubble, as if it represented the whole world, which was at war, and nothing came off any of it. Ny London was entirely abandoned before the second world war began. What remains is traces of rusted machine parts, oil containers and ovens. The wasteland contains the ghost of immense activity, of the fallacy of immense expectations. It is the stuff of extraterrestrial life: implements whose purpose cannot be pinpointed, lying astray, as if a UFO might have hurriedly landed, picked up its beings and whizzed back out into the horizon to elsewhere.

An occasional reindeer dodged the decay, its antlers perked.