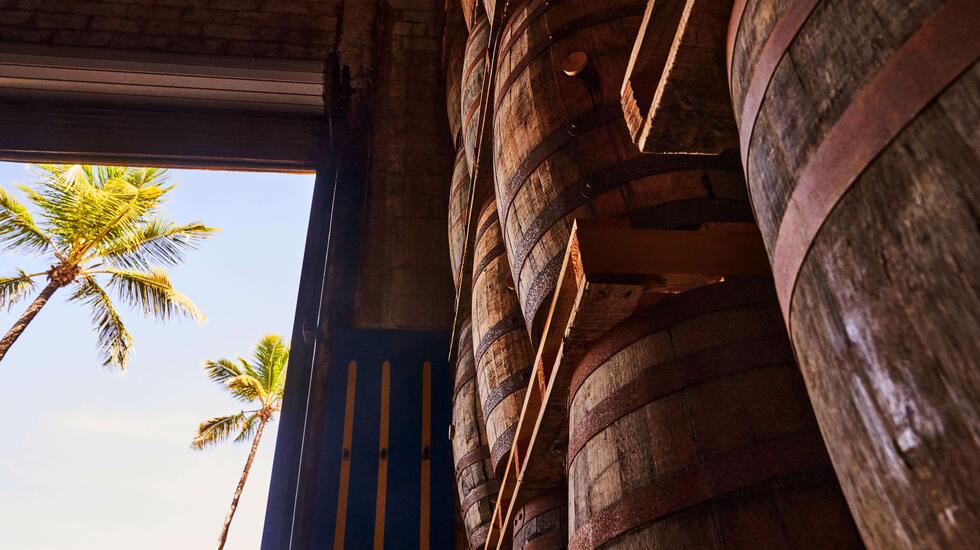 It's It's a fact: San Juan's nightlife runs on rum. It's the fuel that energises the Caribbean rhythms thumping through the capital's streets come nightfall, and it's the Dutch courage that provides confidence in jazz musicians' improvisations when they play the city's dimly lit cigar bars. Low-key drinking dives serve the spirit mixed only with fruit juice, while world-acclaimed cocktail bars like La Factoría, on Calle de San Sebastián, add fermented ginger concoctions, clove honey and cherry liqueurs to the mix.

"Rum is part of the fabric of the culture of the Caribbean," says Gabriel Solano, the general manager of Casa Bacardí, a famed rum distillery on the island (and the flagship home of the global Bacardí brand). "And Puerto Rico is renowned for its award-winning rum. Gold or white, spiced or dark, the island is the rum capital of the world."

San Juan's colourful archiecture, left, and a view the older part of the city.

It's been that way for a while. Rum production in Puerto Rico is thought to date back to as early as the 16th century, when it was discovered as a byproduct of the sugar cane industry. Although the spirit hails from the West Indies (the first confirmed mention of the term "rum" has been found in a 1650 Bajan document), it's difficult to track down exactly when and where the first barrel was made.

Inevitably, the drink followed the British Royal Navy (who colonised and controlled areas of the West Indies) around the world, arriving in America and also Europe, where it became seen as the sailors' drink of choice (and, often, their salary, as some sea dogs would gladly accept it as payment for onboard services). There are few records of how, or who, worked out how to make it (though many countries today claim ownership), but we do know the modern method of crafting the spirit is largely unchanged from what it would have been in the 17th century, when sugar cane molasses was fermented and distilled, then aged in oak barrels.

And we do know that the spirit continues to be deeply embedded in Puerto Rican culture. The Barcardí brand is woven into the drink's history on the island, too. Founded in 1862 in Santiago de Cuba by Don Facundo Bacardí Massó, who bought a small distillery with which to revolutionise the rum-making process, Bacardí's production in Puerto Rico kicked off in 1936 - a canny move to avoid high tariffs laid against Cuban imports into America. By 1961, Casa Bacardí - the so-called "Cathedral of Rum" - had opened in Cataño, a majestic white temple to all things (alcoholically) spiritual. Today, nearly 85 per cent of all Bacardí-made rum originates on the island, including the distinctive Casa Bacardí Special Reserve, an exclusive blend made in Puerto Rico and only available for kerbside pickup from the distillery.

Ways to sample the island spirit are numerous. Drive the 179km length of the Caribbean island and you'll pass so many rum shacks you'll lose count. In Old San Juan, late-night dancing in dive bars - and at rooftop cocktail spots - is fuelled by the spirit. You can swot up on your cocktail knowledge at Casa Bacardí, learning all about Barcardí daiquiris and Cuba libres - and testing some expressions, too - through tasting tours and mixology classes. And on the white-sand beaches, in the shade of swaying palms, beach bars specialise in the island's holy trinity: pineapple, coconut and rum. Piña coladas are practically a birthright, as they should be: the cocktail was invented here.

"Rum is ingrained in our culture and it's always present for celebrations - and Puerto Ricans love to celebrate life," says Solano. "At the beach or on a beautiful night out, a rum cocktail is perfect for every occasion." He recommends keeping the national drink simple, with a pour of Bacardí Cuatro, coconut cream and pineapple juice, plus a fresh pineapple wedge garnish.

Today, islanders are picky about what makes a Puerto Rican rum. High-quality molasses is a must, as is a continuous-distillation process, and the rum has to be aged for a minimum of one year in a white-oak barrel. Anything else, and it can't be called Puerto Rican rum.

Barcardí meets the criteria; so, too, do the bottles being produced by the growing number of artisan distilleries on the island. In the mountains, in Jayuya, Luís José Cruz Rivera and his team have been distilling a spiced rum made using a technique more commonly used to create French brandy at La Destilería. In Mayagüez, the 25-strong Destilería Coquí team started out making an updated version of traditional island moonshine, Ron Caña, in 2012. Now, Destilería Coquí is the largest artisanal distillery in the country.

What unites the hundreds of bottles made across the island is the spirit's taste. Puerto Rican rum should be light, oaky and quite dry. The flavour should be there, be you drinking gold, light or white rum. There's no Jamaican funk in the flavour, and it's less sweet than Bajan bottles. It's distinctively Puerto Rican. And the best way to drink it? When on the island, of course.

Head to the gleaming white "Cathedral of Rum" across the bay from Old San Juan for a guided tour through the brand's island history (and a chance to taste your way through Bacardí's numerous expressions). Mixology classes and tasting tours are on offer, too - and all include a welcome drink. "We have some of the best cocktails on the island," says Solano. His order? A cocktail called when in PR - a tantalising pour of Bacardí Cuatro, orgeat and red wine.

For precision-poured cocktails from an award-winning bar team, head to the edgy San Juan neighbourhood of Santurce to find this slick spot. "The head bartender at La Pícara was the 2019 Bacardí Legacy Award winner," says Solano. "He won with a cocktail called ritmo tropical - the perfect representation of the island." Other menu highlights include the mezcal-spiked fiesta and the seductive amoy y chocolate - a cocoa twist on a traditional old fashioned.

In search of a classic Puerto Rican rum bar? Set your sights on the flamingo-pink La Casita de Rones. Housing two bars, a restaurant and a rum shop, this spirit mecca is famed for its extensive rum menu. Head here in the evening for a tasting experience out under the stars on the patio. The cocktails are excellent, too.

"This excellent bar frequently tops lists of the world's best bars, and rightly so," says Solano. "It's a local favourite - and one of the first island bars to introduce mixology to Puerto Rico." Trading off its reputation, La Factoría has no need of a sign above its door, but you'll always find a crowd congregating around its rugged exterior come evening. Sample the eclectic cocktails that earned it a place on the The World's 50 Best Bars list, then head through the unmarked door behind the bar to find a second room filled with rum-fuelled dancers and a DJ playing until late.