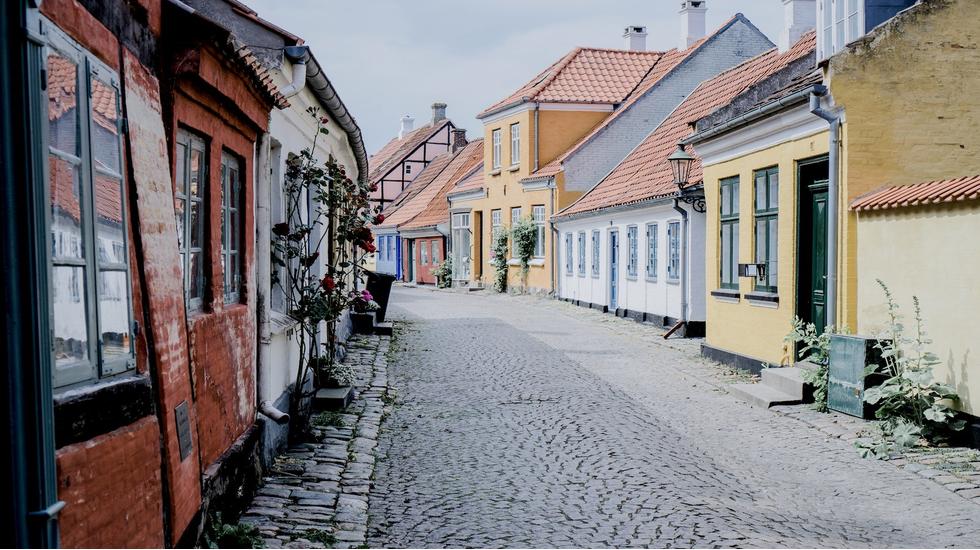 With With just shy of 1,000 residents, the seemingly sleepy Ærøskøbing is one of three towns on the island of Ærø. It's a place that has become popular among a very niche kind of traveller: those getting hitched. Indeed, this is the most romantic town you've never heard of. You might call it the Vegas of Europe.

Ærøskøbing plays host to loved-up tourists year-round - particularly in summer when its dainty shores give way to blue horizons. Sands dotted with colourful houses set the scene for ceremonies and rituals. Out across the waves, smooth, moss-covered rocks peep through the water's surface, Skjoldnæs Lighthouse twinkles from the northern tip of the island and the ferries chug the calm, one-hour journey to mainland Svendborg.

Picture Ærøskøbing as a fairy-tale illustration with artisanal grocery shops and boutiques alongside pubs with roaring hearths, dark-wood dining rooms, whitewashed walls, tall taper candles and, when I visited, Christmas trees and red-hatted nisse (elves) secreted on every shelf and in every corner. Design-conscious boutique hotels, untouched 70s gas stations, farm shops and thrift-cum-vintage stores complete the postcard appeal - the island's two Red Cross shops are full of great finds. There are no chain stores here; this mostly self-sufficient community relies heavily on its small shops and markets.

As we mooched from the windswept coast into town, some friendly locals invited us to a hyped-up party being held that night at the local pub. A 20 kroner ticket would get us into an open bar. My friend and I had planned on staying sober for the trip, but our intention soon waned.

A light rain began to fall as we wandered down cobbled streets of gingerbread-like houses and dipped through a teal door and into the Arnfeldt Hotel & Restaurant. Run by Copenhagen transplants Katrine and Morten Arnfeldt, this place isn't three years old and yet has gained quite the following thanks to its Scandi-chic-with-personality aesthetic. Inside, stark white walls were softened by blush-pink, powder-blue and taupe fabrics, Arne Jacobsen swan chairs, tapestries and lamps. I spied black-and-white photos of old relatives on motorbikes on the walls. Up creaky wooden stairs, nautical themed en-suite bedrooms with crisp white duvets, towelling bathrobes and vases filled with pink roses laid in wait. Bottles of Meraki soap and shampoo peppered the brass-fixtured shower rooms. On the third floor, overlooking the sea, a loft suite - and the hotel's sixth room - was set to be completed.

After a day spent wandering the town and dipping our toes in the Little Belt (one of the three Danish Straits), we were freshening up as a distinctly crustacean scent drifted up the stairs and coaxed us down to dinner. In the garden-facing restaurant, Morten flexes skills acquired in London's Michelin-starred kitchens, while revelling in Ærø's local produce. He was laboriously creating a rich lobster bisque (the ghost of which still remains on a scarf I left hanging outside the kitchen), which would be followed by a velvety duck-liver parfait with apple jelly and bubbles of Henri Giraud Esprit Nature Champagne - cases of which we ordered as soon as arriving back in Copenhagen. I tucked into baked and puréed root vegetables, Ærø pork and locally distilled whisky, which arrived along with vegan creations fashioned especially for my photographer comrade - Morten and team are extremely accommodating to dietary requirements.

Louise Badino Moloney is a tall, elegant, smiling woman with a silk scarf tied in her blonde hair. Having grown up on Ærø and partially in Ghana before working as a stewardess for Japan Airlines, she's not your typical islander. She returned to her birthplace a few years ago with her Brit husband John, and founded wedding-planning agency Danish Island Weddings in 2008, convinced that Denmark's attractively easy marriage paperwork along with Ærø's charming idiosyncrasies make this coastal idyll the perfect wedding destination.

Her new venture reflects on the history of her great grandfather Captain Frederik S. Birkholm and his former home. Lovingly nicknamed the Gentleman Captain, Birkholm was a born to a noble sailing family. Aboard a five-mast schooner named George E. Billings, he sailed the seven seas in the early 1900s, all the while writing to his Ærø sweetheart Anna (who would later become Louise's great grandmother) in English - the language that had come so naturally to him on the Pacific.

Thanks to Louise, Birkholm's grand drawing room is now the where lovers' vows take place - though Danish Island Wedding clients can also choose the beach, a lighthouse or a sunny farm on the south side of the island.

The weekend we visited, there was a Sudanese-German union underway and Louise was typically busy - though she made time to show us around Birkholm's historic townhouse before sitting down with a cup of tea and a slice of wedding cake. Around us, hundreds of newlywed smiles gleamed out from Polaroids that filled a huge wall. Oil-painted seafaring scenes donated by the now-closed local branch of Nordea Bank (now a flower shop) hang in the hallway above a sapphire-velvet scalloped couch. Trinkets sparkled in the golden-hour light.

Louise is far too modest to admit it, but it seems to me that her agency was cataclysmic is regenerating Ærøskøbing's economy. "Before 2008, the town was in economic decline," she begins. "After we opened as an agency, weddings on Ærø snowballed, from 200 in 2008 to around 5,000 in 2018." Lots of Europeans come here to marry, as well as people from Japan and Ghana, largely thanks to Louise's eclectic cultural understanding.

As she regaled us with tales of romantic gestures and memorable festivities, I pressed Louise for wedding horror stories. She yielded. "Everything was set in place. The husband was ironing his shirt when the maid of honour called saying that the bride wants to catch the next ferry out of here." I suddenly remembered that the ferries only departed every 90 minutes or so. "In the end, it was just jitters," Louise continued. "The poor lady didn't have her mother or any female relatives around to reassure her, but everything went beautifully in the end." I had a feeling that Louise's magic touch had something to do with this outcome. "Everybody needs a cup of tea in their time of need. I just gave her a hug and a chat. The following year, I received a picture of them beaming with their new baby," she smiled. To our British-born glee, she also reveals that the drummer of Slade got married here.

Underneath the registry rooms sits café-cum-grocery shop Den Gamle Købmandsgaard, where you can gather Ærø-made cheeses and accoutrements including candles, essential oils and liqueurs - the perfect souvenir. Here I stumble upon a newlywed couple who opted for a low-key, no-party affair and they sit sipping pints, giggling in their finery.

Windows poured glowing yellow light onto frosty cobbles as we walked in minus degrees to På Torvet Hotel & Cafe, where the owners were throwing a special candlelit dinner. The place was full and gorgeous, and we ate duck and nut roast before making our way to nearby Landbogaarden a restaurant-meets-club which was opened by current owner Jacob's great grandfather Michael in 1919. Jacob and his girlfriend Gertrude moved to Ærø from Copenhagen in 2017 and throw perhaps the island's best parties. That evening we danced like it was a wedding, but instead of gravitating towards bouquets, we rowdily danced circles, holding hands, around a twinkling Christmas tree with other peoples' wives and husbands. Such is the romance of Ærø.