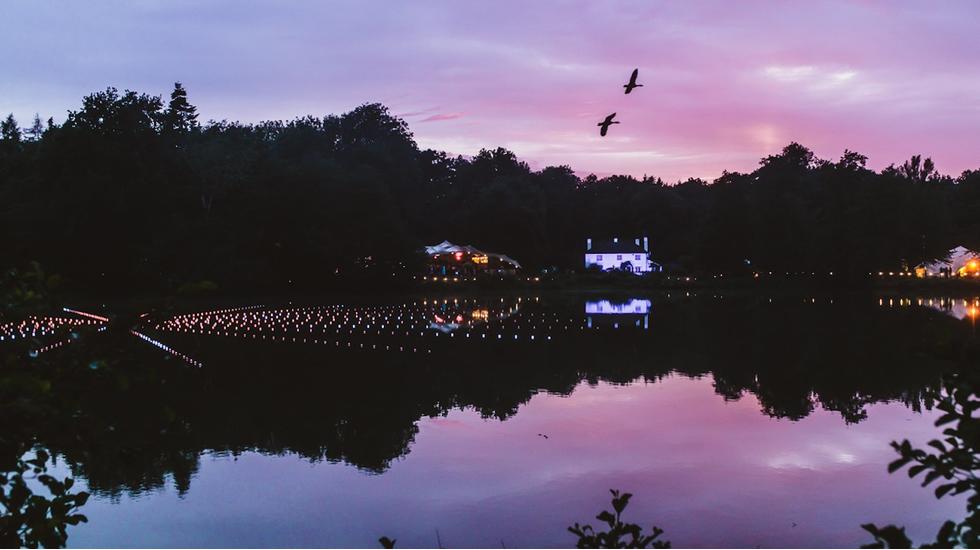 On the hour, every hour!

The The words reverberate around my head as I lean against a mammoth three-metre-tall gramophone (our agreed meeting point), scouring the kaleidoscopic crowd in search of my friends who appear to have fallen headfirst down the Houghton rabbit hole already. Girls in stripy flares, sequinned bras and chunky Balenciaga-esque trainers swirl past me; boys in faded Hawaiian shirts and retro sunglasses move to a thumping bassline that echoes out of the nearby woods.

The first notes of Bicep's "Glue" wash over wayward revellers on the hot breeze, and then I spot them. My own motley crew, sauntering towards me like a band of jolly toddlers - smiling, skipping and stumbling. I breathe a sigh of relief. And then, as if on cue, a man of imp-ish stature streaks past, nonchalantly displaying pert buttocks thanks to an outfit consisting of little more than leather chaps, gleefully shrieking "Party time! Party time!"

And so sets the tone for Houghton Festival.

Filling the grounds of a sprawling Grade I-listed Norfolk estate, 2017's hottest musical export from tech-don Craig Richards (and produced by Gottwood) was awaited with feverish anticipation this year - and it didn't disappoint.

Like Secret Garden Party a decade or so ago - before it became inundated with excitable 18-year-olds with little interest in music and too much interest in glitter - Houghton is beautiful, boho and barmy, expertly catering to a seasoned crowd of festival goers who know what they want. A 24-hour licence sees a mishmash of music - Horse Meat Disco, Seth Troxler, Mr Scruff, Joy Orbison, Donna Leake, Ricardo Villalobos, Margaret Dygas, Khruangbin - ricochet off a central glassy lake before snaking over hay bales, through dense trees and into darkened tents to rouse anyone who dares to rest their head. Concealed stages - like Terminus, found in the forest following a tramp through the campsite - join soul-warming yurts from Brilliant Corners that nurtured partygoers with funky tunes and disco notes by day, heady beats by night.

The festival came under fire for a lack of female talent, and this is undeniably something that needs to be addressed. That and the Portaloos, which were nothing short of abhorrent by Sunday. But industry-wide problems and newbie festival gripes aside, Houghton's hype is well-deserved and extends far beyond the music. Rise early for morning yoga, linger over a three-course meal or board a miniature train for a tour of the sculpture garden. But with killer sound systems and music that never stops, the opportunity for around-the-clock dancing is a primary draw for many. My favourite place? A 360-degree stage in a sunken, grassy amphitheatre, where people looked like their faces were going to crack from smiling, sunrise to sunset.

The thing about Houghton is that you could spend four days getting really (really) messy, or you could simply hang out at the spritz bar soaking up the sunshine. Alternatively, you could scamper around baring your buttocks and shrieking. And really, that's what a festival is all about, isn't it?