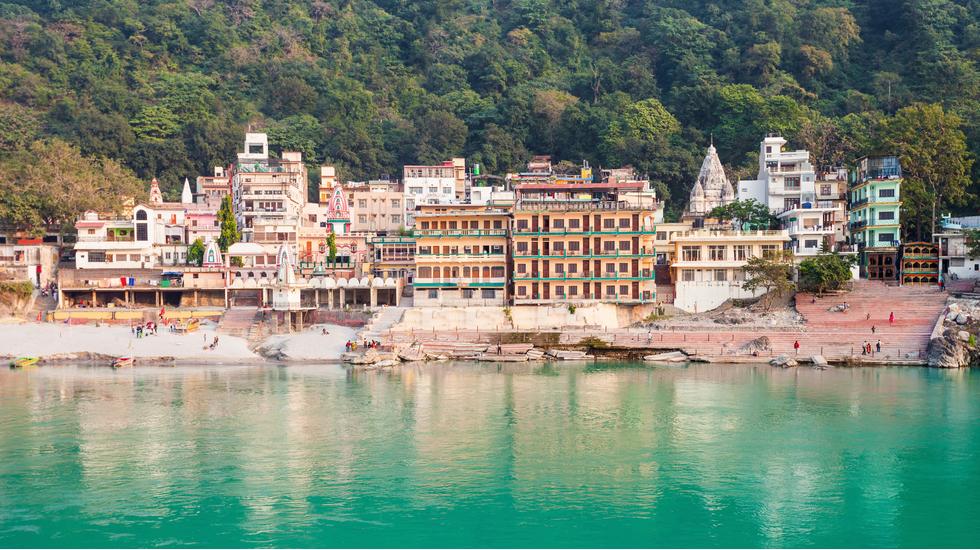 Words by
Will Brown

Rishikesh, Rishikesh, the City of Sages. Where hymns and tales of all-seeing men were written and then whispered across the continent. Where the Ganges (affectionately named Mother Ganga), in great, languid sweeps of her neck, rests against the many temples and statues that stand facing her banks. Paying homage to the great river - the serpentine mass of melted glacier that carved its way out of the Himalayas and drew its belly across India's shoulder - the monuments stand like concrete giants. Imposing bodies of mortar and reinforced steel that pulled themselves from the earth, so as to dip their foundations in the water.

Like that of Temple Kailash Niketan, its 13 stories wrapped in bands around the body of the building. Painted in sacred saffron with strings of golden handrails, the building looks like one massive viewing platform, solely designed to permit one simple indulgence: to marvel at the river below.

The Lakshman Jhula ("jhula" meaning bridge) is an iconic expanse of white iron that reaches over the river. The bridge lashes together the town of Tapovan - the curled finger at the end of Rishikesh's northeastern sprawl - and Jonk, a tight conduit of busy shops. There, stacked buildings create a bustling corridor, overrun by competing signs, each one trying to twist your path beneath low doorways or up across the confusions of stairways that branch out onto the road, their steps sliding into one another, as though locked in a constant battle to be walked upon.

Ayurveda clinics, music shops with Bansuri flutes descending into the street like vines, clothing stores dressed with saris, fabrics and hooded shawls woven from thread walked down from the mountains all shout over each other.

In shaded alleys, food vendors reach at you from beside their tiny wheeled kitchens offering steaming foil trays of anything and everything. The ceaseless hiss of spitting onions fidgeting on faces of heated steel is accompanied by a percussion of popping corn and a constant chorus of happy bells. The scene is held together by an unending passage of incensed smoke - the only stillness - that pulls this frantic hysteria of opposing actions and competing colours into one intense single frame.

The heat of the hot plates and cooking flames smearing their light on perspiring cheeks in little flickering slaps; the heavy stench from the layers of a thousand spices; and the flow of people moving with the same gradual viscosity of stew. The street feels like the finale of a factory conveyor. A baking chamber consolidating the tempered ingredients of a rich feast and applying the last dramatic flourishes. A feast not for the stomach but the eyes, the nose, the fingertips. Flourishes, not for the palate, but for the atmosphere. It is a sensory banquet.

Infamous for its unpredictability, India never fails to pull an otherwise normal day across into absurdity. One such occasion for me was in Rishikesh, when crossing the Lakshman Jhula. There, in the footsteps of a hundred others, I watched as the lady in front of me (aged 60-something, tiny and dressed loosely in a loud, sequinned sari) threw a plastic bottle over the edge of the railing. The very instant the plastic departed from her weathered hand, the lumbering mass of a passing cow immediately and unexplainably became rigid with distress. Up until that moment, it had been completely docile, desensitised like all the other sacred cows to the torrents of merchants, gatherings of tourists and impatient motorbikes. But now, with the conviction expected as if somehow the cow recognised the woman and could recall some foul crime she had once committed against it, it turned on her, cutting into the air with violent sweeps of its horns. Erratic fits of motion that looked as though the animal were frantically trying to erase her. Running and desperately trying to place people between the horns and herself, the woman squealed in small panicked yelps, thrown out in intervals separated by the manic twisting of her head, stealing looks over her shoulder to see if the beast's aggression had abated. The cow did stop, eventually. Seemingly satisfied that the lady was sufficiently startled, heaving and shaking in the arms of several bewildered men, lesson learned.

Like a clot of blood, rapidly upsetting the internal environment of a capillary only to dislodge moments later, the cow continued into the stream of people and the whole bridge relaxed. In Hinduism, the only deity ever to take the form of a cow is the goddess Bhoomi; she represents the Earth.

Another day in Tapovan, accompanied by a young German named Martin, I left the shade of the hostel in exchange for the heat of the bazaar, and the promise of my daily thali, a classic Indian lunch of bhat (rice), daal (lentils) and tarkari (vegetable curry). We joined the main road connecting our hostel to the hubbub of the town below and started working our way through the buses and cars; the jeeps carrying parties of excitable New Delhi students going water-rafting with their inflatable boats, and the uncountable number of pushcarts laden with sweet jalebi, beads and mangoes.

One such cart - a tired wooden deck supporting a block of chipped ice and a garrison of glass bottles spilling with lemon juice, manned by an impossibly frail lady - passed us on the road, continuing up a hill that twisted out of sight and on, seemingly forever. The manic clinking of the bottles emphasised the frailty of the woman and the difficulty of the task to be surmounted. Martin and I shared a look, both admitting to the same feeling of impotence as the lady continued away from us. Without a word we started back the way we came, offering a "namaste" as we approached the peddler, who looked momentarily dismayed and irritated that we should want to kill her momentum for a drink. We waved our hands, dismissing her reproach and pointed instead to each other, then the cart, then the hill. The lady's eyes wilted shut. She smiled and nodded slightly, holding the cart for us both to take a handle. The woman was humbly indifferent, seemingly resigned in having any attachment as to whether the cart was pushed by us, or by her; she wore a face of relaxed understanding. It needed to be done - and it would be.

Before we'd made it more than five metres, almost as though chaos lay in wait beneath the tarmac, the street pulled itself into a frenzy of horns and shouts. From the windows of the idle traffic - dozens of the dormant white jeeps containing dozens of stifled, volatile Indian students, all waiting to escape the imposing heat for the cool, clean northern waters of the Ganges - came calls of appreciation. People hung from windows leaning out into the road and motorcyclists blew their horns as they passed.

Manifesting in the immediate fire of fleeting camaraderie, the uproar enclosed the street in an ecstatic shawl - the surreal, consuming sensation of a dream. Embarrassed, we were suddenly the focal point of a hundred smiling faces.

When the peddler decided we had pushed far enough, she gently placed her palm upon the flat of my fist. Nothing more. There was no great thanks, no applause. In fact, there were no words at all. She simply commandeered the handles with the same delicate motion that she had relinquished them - with a gentle tilt of her head - before continuing up the road and out of sight.

Just as quickly as the bridge had resumed its calm after the commotion with the cow, the road easily settled back to the continuous and uneventful justling between car, van and lorry. That is to say, normality unpaused and the surreal moment was washed away by the unperturbed chattering of horns.

The depth to which India accommodates the unexpected gives it the weight of an ocean. Like rocks being cast from the shore, each moment of disturbance has force enough only to cause a ripple. Moments of shrill excitement pull bystanders into participation with the single-mindedness and vigour to be expected as if they were actually submerged in water and fighting for air. Only to dismiss them seconds later, carrying any mania back below the surface of an unshakable whole.

Just as it is beneath the water that calm holds its ground, despite even the greatest of tempests, it is not simply India's ability to showcase the storms that woos visitors, but the grace with which it weathers them. The fact that the peddler with her cart did not offer gratitude is testament to this wisdom: to single one action out is to undermine the whole. Everything that arises from the depths of this place - her country - no matter the consequence, the magnificence, or the suffering, will return to the same depths on its passing. To attempt to clutch onto a singular thing is like trying to take a fistful of water; it is to deny yourself the splendour of the next moment.