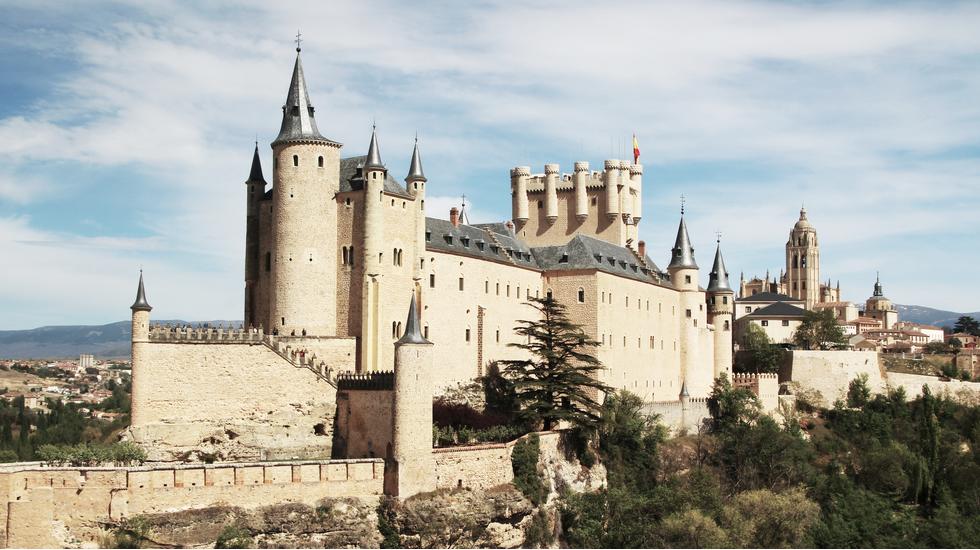 Welcome Welcome to the furnaces of hell; Madrid in 40-degree heat. We make a beeline for the nearest restaurant that has realised that wilting tourists are bad for business and routinely sprays a cooling mist over its patrons. Classic tapas - croquetas and jamon with melon - are as delicious as the mist.

Ambles past antiquated bookshops on cobbled side streets lead us to two of the most impressive sights in the city; Almudena Cathedral, a spectacular blue and white edifice that looks like Wedgwood designed a church, and the Royal Palace of Madrid. We enter the latter, a feast for the senses with each room more ornate than the next and one made entirely from porcelain (which my boyfriend callously compares to "a fancy public loo").

The momentous arrival of Buddy, our white Fiat 500 hire car that battled through horribly confusing roundabouts on the way out of Madrid and deposited us safely in Segovia about two hours later.

A UNESCO World Heritage Site, the city has a medieval feel and is centred around the Alcazar of Segovia, a castle that inspired the one in Sleeping Beauty. Following lunch in the Plaza Mayor we visit Segovia's cathedral, a vast structure known as the "Lady of Cathedrals" for its gothic style. The Alcazar is equally impressive, steeped in Muslim and Catholic history, with a curious mix of canons from the Napoleonic wars and intricate Arabic stone carvings. We walk back through Segovia's art-filled labyrinthine streets to the border of the city where a Roman aqueduct still stands in all its glory. We dine on suckling pig (a Segovian specialty) in the shadow of thousands of years of history.

Spain's oldest university city fights for attention at every turn. Not one but two cathedrals, countless churches, dozens of university buildings, monasteries and libraries are all built in soft sandstone. In the early evening glow it feels like you are walking through sunlight itself. Salamanca's Plaza Mayor is particularly sumptuous; by night it is resplendently lit and buzzes with life. We eat at the brilliant El Pecado restaurant (a favourite of Spanish film director Pedro Almodóvar), finishing with a white-chocolate soup.

We are not done with Salamanca just yet. We get up brutally early to catch the University of Salamanca when it opens at 9AM. Lecture rooms and libraries date back to the 15th century, while the Convento de San Esteban is a Benedictine monastery built in the 16th century. We are the only people around, exploring the cloisters and architecture in enviable peace.

Reunited with the beloved Buddy we embark on a three-hour drive across the border to Coimbra, Portugal. Just over halfway there and the sun disappeared. We quickly realised that the cause was not a large raincloud, but the smoke of a mammoth forest fire. It looked like we were driving towards a bad Nicholas Cage disaster movie.

Built on steep hills and with cobbled streets, this town has not escaped Portugal's dire financial straits, nor the anti-tourist movement that is sweeping through Europe. Xenophobic graffiti is scribbled and sprayed on every available stretch of wall and the streets are eerily empty. Our primary reason for the visit, the world-famous library Bibilioteca Joanina, is remarkable but the dirge-like Fado music that wafts through the street from a lonesome busker sums up our feelings about this pretty but fading town.

We race out of the hotel at 7AM (admittedly out of fear that Buddy had fallen prey to anti-tourist graffiti, though thankfully he remained unmolested) and hit the road north, to the coastal town of Vigo.

We imagined it as the jumping-off point to the Islas Cíes, a white-sand archipelago just off the coast - before naively realising that the boats taking passengers there were booked up several days in advance.

Our second option, the neighbouring peninsula of Cangas, is just a 10-minute boat ride away. The quiet beach is hugged by forest with a makeshift bar and several camper vans a nod to the area's largely hippie clientele. While admittedly colder than the Mediterranean, it was not enough to put us off and we plunged straight into the Atlantic Ocean.

The climax of the Camino de Santiago pilgrimage route, Compostella, is also the end of our own journey. Following a teary farewell to Buddy, we set out to explore. An ancient Franciscan monastery and tiny squares hugged by lush greenery and leafy parks; the city reminds me of York meets Seville. After dinner, we caught a brilliant musical troupe in traditional dress entertaining a large crowd of pilgrims, tourists and locals. We joined it and sang along to Viva España late into the night.