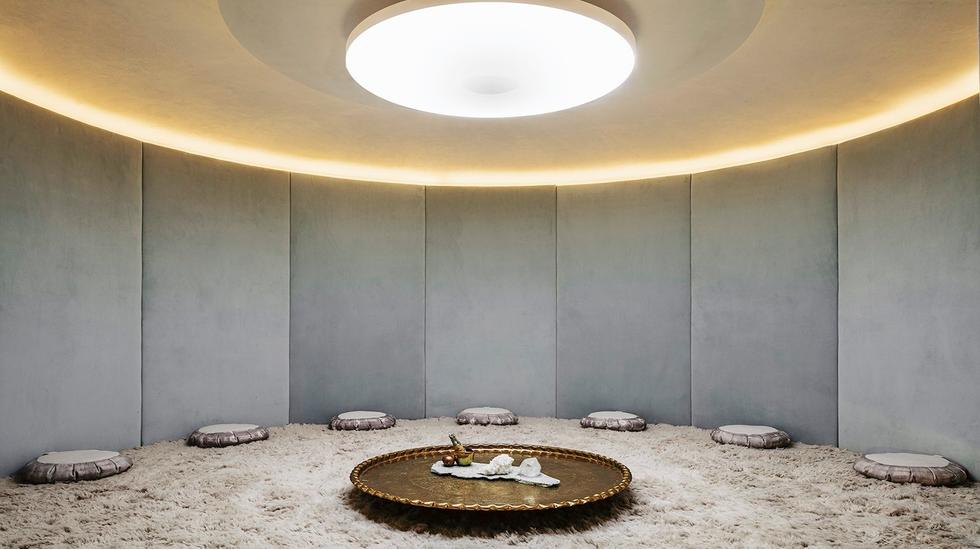 It's It's dark and moody in the basement of a recently converted 1930s Williamsburg soda factory. A mural by Amit Greenberg (a multi-disciplinary artist and designer who has collaborated with names such as Louis Vuitton, Fendi and the iconic Parisian concept store, Colette, which bid adieu to its adoring hipster public in 2017) spans a dimly lit wall. So far, so Brooklyn. Here though, surrounded by buildings occupied by Brooklyn Brewery, The Hoxton and an event space run by urban fashion retailer Kinfolk, lies a project whose inspiration stretches way beyond the sort of retro for which this neighbourhood is renowned (and often maligned) - we're talking as far back as the third millennium BCE. Greenberg's mural - depicting an Roman bathing scene - is not overlooking a reclaimed wooden table and a cocktail in a vintage tankard dimly lit by sparse Edison bulbs, but rather a series of thermal pools, heated marble hammams, cryotherapy kit and a state-of-the-art sensory deprivation tank.

Bathhouse has preserved the original brickwork from the old Brooklyn Bottling Company, along with a former 100ft-tall smokestack, now serving as a private ritual bath area. The contemporary aesthetic here - particularly at its street-level restaurant and bar - is adequately on-brand for its location, though it's not a case of style over substance. Treatments are overseen by a team of leading industry authorities whose backgrounds include work for the Brooklyn Nets and New York City Football Club. The facilities are ahead of the curve, as that sensory deprivation tank (filled with Epsom salts to foster a notion of mind-clearing weightlessness) suggests. Bathhouse is a place of relaxation and high-end wellness for the creative class. It's a spa for people who don't like spas.

Wellness and water therapy, spas and retreats...they're something naturally associated with powdery sands and big stone Buddhas, fresh flowers and the meditative sound of lapping waves. Relaxation, rejuvenation and the pursuit of Zen may have an inexorable bond to remote islands and high luxury, but in 2020 wellness is something that our smartphones remind us to check in on each morning. The spa is still an image of escape, but both our outer- and inner-wellbeing has gone mainstream.

Today, Gwyneth Paltrow sells feel-good vibrators and gym lads are doing circadian-synced intermittent fasting. Times are changing for the industry. Day spas and city-centre treatment rooms are nothing new and, for many years, hotels have been locked in a battle of one-upmanship in terms of their wellness offerings. But with a global city-dwelling population that has exploded from 751 million in 1950 to 4.2 billion in 2018 and a dominant generation more aware than ever of the importance of taking their foot off the gas, urban wellness is a concept that will become impossible to ignore throughout this next decade. What's more, some big players are putting their money where their mouths are.

Luxury resort group Aman opened in Tokyo in 2014, while Six Senses Resorts & Spas arrived in Singapore in 2018. Both are set to open this year in New York, the latter featuring a vibroacoustic meditation dome, bathhouse, magnesium pool and holistic anti-ageing centre among more standard wellness-centric offerings. This year will also see the debut of One&Only One Za'abeel in Downtown Dubai, after the brand's owners, Kerzner International, announced the addition of urban resorts to its portfolio in 2018. As the landscape of our cities and their cultures shift to accommodate spiralling populations and changing personal needs, the notion of an "urban retreat" needs to evolve in order to keep pace.

While Six Senses New York - occupying two twisting towers designed by the famous Danish architect, Bjarke Ingels - may seem a world apart from the cool- café aesthetics of Brooklyn's Bathhouse, the colossal 136-room West Chelsea hotel will have at least one thing in common with the Williamsburg locale: community.

Both Bathhouse's plant-filled bar-restaurant and its wellness centre have community at heart; its founders are keen to move away from the shush of conventional spas and back toward the communal essence upon which such spaces were founded. Six Senses New York's bathhouse - a series of social spaces designed to encourage guests to come together - is underpinned by a similar principle. Community and togetherness are, after all, notions intrinsic to the birthplace of what we now know as a spa.

We must gaze back to some time around 2500 BCE to find the roots of the "spa" concept, to the lost city of Mohenjo-daro, in what is now Pakistan. Here the ruins of the Great Bath, thought to be the earliest communal bath of the ancient world, exist as a monument to the Indus Valley Civilisation. Indeed, it is from communal bathing that we get the word "spa" (the acronym of salus per aquam, meaning "health from water"), which was the name given to the eponymous Belgian town where Roman soldiers would soothe their battle wounds in hot mineral springs. Over centuries, public bathing would evolve throughout the world, permeating culture after culture, but it wasn't until the early 1900s that the modern-day experience - all facials, manicures and such - would begin to take shape and a certain Elizabeth Arden would open the first ever day spa in, you guessed it, New York City.

The spa experience as we know it today would boomed during the 1980s, and the 21st century has seen continued growth on a staggering scale. The global wellness market is now estimated at some $4.75 trillion. Yet times change, and there is a sense that wellness is reaching a sort of ubiquity in line with, say, casual dining. The evolution of the urban retreat is therefore a natural progression - and progression is something at the core of a new 13,000sq ft, two-floor space in Manhattan's Union Square.

"Your health has one address" reads The Well's tagline, and for $375 a month you can use that address as a one-stop-shop to boost your wellness inside and out. You'll receive health coaching, mobility assessments, private training and treatments that include traditional Chinese medicine, bodywork, Ayurvedic guidance, sound healing, emotional wellbeing and plenty more. A comprehensive amalgamation of a reinvented day spa, fitness club and wellness centre, The Well's 360-degree approach to health has enjoyed impressive early success, and thanks to big names in investment behind it, you wouldn't bet against it having a WeWork-style assault on the international wellbeing space. As a vision for urban wellness in the 2020s and beyond goes, it's as revolutionary as one may imagine.

Like Bathhouse, The Well exists in a space of contemporary aesthetics that embraces the Instagrammable nature of hip coffee shops and forward-thinking design hotels. Yet it's not just in New York where this wellness 2.0 is aligning itself with style-conscious millennials; urban alternatives to the orthodox concept of luxury spas are popping up in Melbourne, Berlin and beyond.

Photogenic detox bowls full of colour and superfoods are served up alongside reiki and vinyasa yoga in the posh Western Australian suburb of Armadale, where Willow Urban Retreat offers a holistic approach to health that imbibes its clients with "ambient tones, rhythmic symmetry and purified air". Like The Well on a micro-scale, Willow brings together Eastern and Western philosophies in a comprehensive ode to modern wellness, and does it all in the sort of compact venue that, until recently, may have been an art gallery or pop-up events space - accompanied by a produce-forward café, of course.

And in the German capital? The sort of wellness experience that could only be conceived in Berlin. At Liquidrom electronic music is pumped underwater into a warm saltwater pool with theatrical lighting; it's the leading draw of an architectural spa complex built to evoke the sense of a circus tent. DJ performances soundtrack the main event, while flotation pools, a Japanese-inspired outdoor bathhouse, Finnish sauna and Himalayan salt cave are among the myriad of amenities on hand throughout. It's as urban as an urban wellness experience could be.

In Canada, skyscrapers and industrial relics backdrop the Old Port of Montreal, where relaxation seekers can board a customised "floating spa". Bota Bota offers a series of decks and pools, a water circuit, saunas and multitude of treatments alongside a garden and a restaurant with a health-forward culinary offering. It's the type of space you'd expect to find amid the solitude of a Scandinavian lake, yet standing in the shadow of disused concrete behemoths it's as bold a reminder you'll find of wellness's dramatic departure from oceanside retreats and essential oils.

Resplendent in shiny gold and bold architectural forms, EN Paris is a beauty space of ethereal whimsy and a retail outlet for a new line of Japanese cosmetic products. In soothing treatment rooms, bespoke facials and body massages take place, demonstrating that one need not enter a dedicated spa space to reap the benefits of the ubiquitous wellness industry. Back in New York, The Assembly is a co-working platform that raises consciousness and wellbeing to the same level as networking and amenities.

That's the evolution of wellness in a nutshell. From push-notification reminders to practise your daily meditation to co-working communities with gong baths and spiritual wellbeing programmes, the notion of the "spa retreat" may be rapidly shifting, but so too are our own personal journeys. We dine and drink in evocative urban spaces, we attend progressive gallery openings and stay in hotels that redefine design and experience - so why shouldn't wellness sit alongside it all? As urban wellness escalates, the essence of the retreat will continue to imbue all we do. In days when escapism was rare, rose petals and towel origami served as signals to relax. Today, those signals could be anything from exposed concrete to dance music. Welcome to the urban future of wellness.