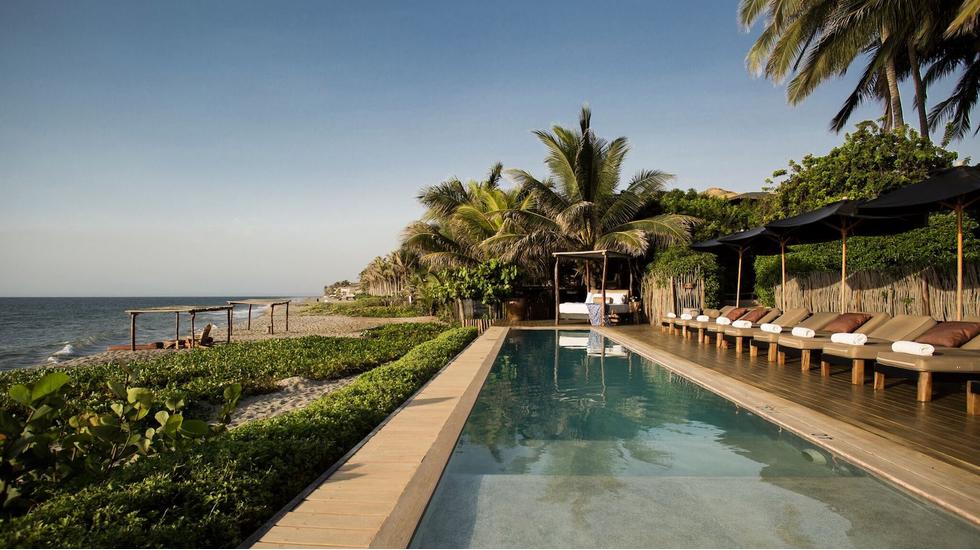 Discover More
It's All About Isla Holbox, Mexico
Read now

Cabo Cabo Blanco in northern Peru is a dramatic spot to behold a sunset. The Pacific stretches beyond the shore; vast, awesome, tossing fishing boats on its surf as hundreds of frigates and gulls rise and fall in Mexican-wave formation above the ocean.

This is where Ernest Hemingway came to film the Old Man and the Sea and word has it he caught a 700-pound marlin during his month stay at the fishing club where Marilyn Monroe was rumoured to have joined him for pisco sours. Hemingway may be long gone but the no-frills restaurant that served him still remains, where I sit now, devouring a mouth-watering mero picante, raw spiced sea bass.

While Peruvian ceviche is the buzzword in gourmet circles from Soho to Noho, people aren't just drawn to this coastline for the freshest catch; Cabo Blanco is fast becoming a surf mecca. "We've nicknamed it the "Peruvian Pipeline" after the Banzai Pipeline in Hawaii," explains Enrique who runs the local surf and kite surf school. Every January up to 100 surfers compete for the Billabong Cabo Blanco Tube Riders Trophy. It's a risky business chasing that 3.5 metre wave; hit the rocks near the shore at breakneck speed and you're dead. For now the waves are relatively calm and the winds too low for Enrique and fellow kiting enthusiasts to set sail and paint a rainbow in the sky.

Thirty minutes along the coast from Cabo Blanco, over sand dunes and past dramatic luna-rock formations you reach the town of Máncora, fast gaining a reputation as "the new Tulum". When I came trekking to Machu Picchu in 1998, Máncora was a tumbleweed in the desert, nothing more than fishermen shacks - palm-thatched cabañas with running water only if you were lucky. Twenty years later boutique hotels here are welcoming the likes of Alicia Vikander and Michael Fassbender. The most exclusive oasis of all is KiChic. So-called because owner Cristina Gallo goes by the nickname of Ki and "also because it means soul in Japanese," she explains. It's also undeniably chic.

Gallo bought a plot of land here in 1989 with the intention of building a family home. "But then I realised that I had come back from my travels in India, Australia and Central America with all this amazing furniture, precious trinkets and so much life experience that I decided I wanted to make it into unique hotel which would bring like-minded people together." Gallo seeks to create a holistic experience (mind, body and soul) for guests to savour a deliciously balanced menu, practise yoga and indulge in massages, meditation and personal reflection.

Every detail in the hotel - from the entrance sign beckoning you into "a life of balance" and the Thai cymbals atop the reception desk to get staff's attention - ooze decorum and wellbeing. A courtyard of foliage leads to a living room open to the sea filled with inviting leather sofas, tables adorned with beautiful Asian vases and art books, glass bottles filled with seashells, dreamcatchers swinging in the breeze. Grassy verges planted with mature trees cherry-picked by Gallo offer plenty of shady chill-out areas and slope down to a lap pool overhanging the beach. Once through the little gate by the pool I spent an afternoon roaming the golden beaches, reminiscent of Malibu and Montauk of old and present-day Tarifa.

Returning from a 40-minute barefoot walk to Máncora with only scuttling crabs and wild horses for company, KiChic laid on the most decadent of sunset massages. By night the trees were festooned with lanterns twinkling like fireflies. I gorged on the best organic food provided by the hotel's vegetable garden, along with catch-of-the-day on a bed of saffron risotto, all served to a perfectly pitched bossa-nova soundtrack.

Each of KiChic's stand-alone suites is made of stones, locally sourced wood and mud, compiled in traditional artisanal techniques with intricately woven sugar-cane ceilings. All have a sea view and are furnished with antique chandeliers and the finest linens, with expansive French windows opening onto a private outside living space with loungers and a plunge pool. I slept with my windows open and awoke to a symphony of birdsong in the surrounding trees. Keen for a morning excursion but too late for Máncora's whale-watching season and too jet-lagged for a yoga class, I decided to throw caution to the wind and brave my first surf lesson. Thanks to the patience and encouragement of my instructor, Maria, I managed to take at least a couple of waves standing alongside the Máncora youngsters frolicking in the shallow surf.

With a wedding descending for the weekend I bade a reluctant farewell to the magical Kichi and took a short tuk-tuk ride to check in to Villas del Mar. This rustic-chic hotel, a short uphill stroll along a private track from the beach, is more of a family-friendly affair; oceanside white sun loungers face the Pacific blue below, while an open-plan bar-cum-restaurant curves around a large decked swimming pool at the centre of the hotel. Villas del Mar's eight rooms are on two terraces leading from the pool, burrowed among vibrant fuchsia bougainvillea and laurel trees hung with hammocks and a vegetable garden, the latter a nod to the focus on home-grown produce.

In the evening, the hotel summoned a tuk-tuk to deliver me to Máncora's main drag to meet Juanchi, Máncora's most-famous resident. This charming, smiling, softly spoken son of a fisherman returned from his Cordon Bleu training in Lima to open the eponymous La Sirena d'Juan restaurant. An international crowd descend on his Florida-Keys-style eatery to devour Juanchi's potent cocktails as much as his celebrated food. When I tell Juanchi that his tuna ceviche, dressed in black sesame and nori algae, literally melted in my mouth he laughs and says that there is a reason for that. "You have to understand the culture of fishing here, there is a respect for the sea and the trade. It's not about using massive nets. We catch them, one fish at a time. They aren't all tossed together and damaged. That's why my tuna tastes the best!" How could any desert eclipse the ceviche? "Try this: cherimoya surprise." Mark Twain wasn't wrong when he described the tropical cherimoya, beloved of the Incas, as "the most delicious fruit known to man". A spoonful of custard apple fruit with the crunch of pavlova and a twist of dulce de leche; totally divine. After a whisky nightcap a tuk-tuk speeds me home, dodging foxes through the undercliff up to Villas del Mar.

I wake to the waves and take my last breakfast overlooking the Pacific in the company of four zoñas, mischievous chirping little birds intent on stealing bread from my table. To describe this charming Peruvian surf haven as "the new Tulum" seems a bit of a shallow comparison, but 365 days of sunshine a year paired with plenty of soul and buena onda means Máncora is no doubt headed for similar levels of popularity.