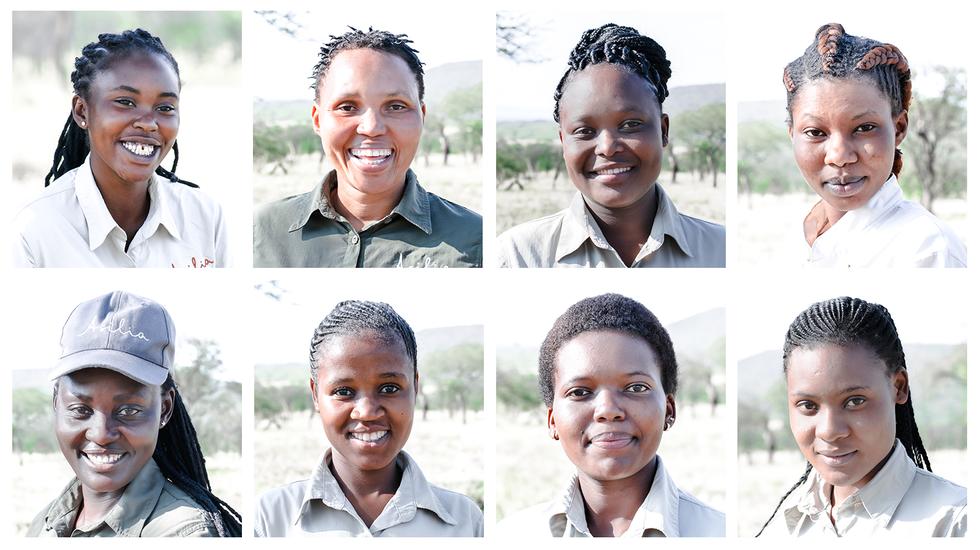 I I am a woman. My name, Lacy, is one of the more feminine names I know, even though it was given to me to commemorate a male drummer in a 70s rock band. (My mother was a child of the 60s, teen of the 70s and a hell-raiser in the 80s.) Although I count myself as a proud feminist who will rally for equality of the sexes, I am also immensely proud of the things about me that embody the traditional - and yes, outdated - view of what it means to be a woman. I like shoes; they always complete an outfit. I spend an inordinate amount of time and energy tending to my hair. Skincare is a priority; this is the only face I'm ever going to get, after all.

Lotions and potions in tow, I board flight number 501 which will propel me through the sky toward Addis Ababa, the traffic-choked, coffee-hyped capital of Ethiopia. From there, I hop on a slightly smaller, slightly more touristy flight to Kilimanjaro where I join a few hundred other khaki-clad nomads as we disperse among an array of chartered flights bound for the Serengeti.

It takes me nearly 48 hours to get to the heart of Africa's most famous national park, where a team of 16 women operate the continent's first and only all-female-run safari lodge. This is ground zero for girl power in a country that, up until four years ago, had a minimum female marrying age of 15. To this day, only a very small percentage of girls have access to education. The women and I don't share a landmass, a religion or barely even a language - but it had gone through my mind as I cut through the clouds en route that there's a high probability that all 17 of us would look at Rosie the Riveter of rolled-sleeve, red-bandana, Second World War-poster fame with a certain level of fondness. What didn't go through my head is that we'd spend the next week bonding over hairdos, beaded sandals and the morning routine in which I prepare my skin for being roughly 2,500 miles closer to the equator.

It's early afternoon when I arrive at Dunia Camp, beyond jet-lagged - time and date elude me. In fact, I'm sure of only one thing as my open-air ride bumbles out of the vast Serengeti plains and along an increasingly narrow road shaded by a canopy of acacia trees: the consequences of 48 hours of sleeping with my neck at a 45-degree angle have officially made themselves known. Small talk, singing and dancing rank high on my "not now" list. That is until I round the last corner and am greeted with the smiling faces of 16 women who are truly redefining the safari industry - and for the most part, they're deeply unaware of doing so. They are singing and dancing for my arrival. I pull my tangled hair into a loose ponytail and accept the fact that I'm about to be out-rhythmed. Sometimes you just gotta dance.

There's Grace, taller than most others with a strong build, round face and gracious smile. She's the head chef and, though outwardly more reserved in her demeanour, I know within hours of arriving that when she speaks the kitchen listens. Chinese food, I discover, is one of the weirdest cuisines she's had to learn to cook, but one of her favourites to eat. Cinnamon rolls are still a novelty.

Angel is the camp manager and "boss lady", we joke. She has a short, low-maintenance haircut, a grin that puts the most rigid at ease and a contagious laugh. She's also the reason that the all-female Dunia Camp exists in the way it does. She possesses that enviable quality of effective authority, being able to relate and lead in tandem. In speaking with the other ladies as the week wears on, I learn that a large percentage of them count Angel as their mentor.

The hardest part of her job, Angel says, isn't managing the 15 women who look to her for leadership, or even the thousands of guests who occupy her eight tented suites. Rather it's the mad scramble that takes place after "waking up in the morning and finding that there is no water in the camp. During the night," she continues, "the elephants [drink out of our] water tanks and break the tubs and pipelines." Putting all the pieces back together before the guests wake up isn't easy.

Samia is a waitress who spends the majority of her time tending to those in the camp's communal mess tent. Her almond-shaped eyes pair well with a jawline that becomes more defined as her smile broadens. Her hair is gathered together and hangs loosely against a beige button-up shirt. "My friends and family are very proud of me," she giggles when I ask what it's like to return to her village. And in a moment that signifies just how progressive, and how common, women and their plights are around the world, she says through the most genuinely childlike smirk: "I've shown them that I'm strong and that I can do what a man can do."

Then there's Zawadi and her unofficial protégé, Neema, the camp's only guide and guide-in-training, respectively. Together these two have formed a sisterhood not that dissimilar to the lionesses which we spend our days observing. If one is out hunting, so to speak, the other is all ears. When Zawadi momentarily gets stuck with the Toyota Land Cruiser we're riding, Neema is the first to offer support from the backseat. With an unparalleled display of enthusiasm, the two frequently marvel at the way African American women change their hairstyles and discuss the care of the natural dreadlocks that cascade down their small frames (both hoist themselves a bit higher behind the wheel with the assistance of a seat cushion).

After day two when the newness of the animal kingdom has worn off, I realise that watching these two ladies interact is more fascinating than anything I'll see in the Serengeti. With patience and prowess, the pair deftly manoeuvre being the Serengeti's - perhaps even Africa's - rare female safari guides. I am a brief member of this tightly formed pride, and I'm all ears.

Beyond hair, the two share a similar story. Zawadi grew up in northern Tanzania on the western slope of Lake Victoria. National parks and game reserves form a circle around her childhood home before meeting up with the southern border of Uganda. Neema hails from Arusha, the main launching pad for safari-goers and where the country's two main wilderness attractions - Mount Kilimanjaro and Serengeti National Park - flank to the east and west. Yet neither of them grew up seeing the wealth of wildlife that surrounded them. "My family wasn't interested at all," notes Zawadi. "People thought national parks were for foreigners," Neema echoes.

Though an unlikely match, the two beat the odds - Neema's interview to get into the guide trainee program brought out more than 400 applicants, only 12 of which passed - and having made it through, they both speak of an initial reluctance from their peers. "When I first started working, I wasn't accepted at all. They said, 'this is a man's job, how can you do the work that's dominated by males?'" Zawadi tells me. "Just wait and see," she finishes with defiance. Neema's family implored: "You're very young. How can the guests trust you?" She adds: "I knew that if I worked hard and focused I could be anything I wanted to be."

Great strides are left to be made, however. According to the Human Rights Watch, 40 per cent of girls in Sub-Saharan Africa marry before age 18, and anywhere from 30 to 51 per cent of those girls give birth before reaching that age as well. Once this happens, access to education is greatly diminished. Nevertheless, Zawadi and Neema agree that life for a female in Tanzania is progressing, regardless how slow the pace. "Previously wives had to stay home and have children," Neema explains. "People would think that if you are an educated woman you won't respect your husband. But right now, I can say that society is changing. Life is different."

Nowadays, it's the guests, Zawadi points out, that do the most gawking. "Most of them are mesmerised when they see me," and she's asked for the occasional selfie. To that, I shyly raise my arm and do the universal gesture that implies, "let's take a picture together". It doesn't come from a standpoint of observation, but rather of awe. Here are two ladies who are crafting the Serengeti's answer to the so-called "girl boss". Like me, they rally for equality of the sexes while embracing the things about them that embody the traditional view of what it means to be a woman. This, I think, is the single most incredible thing about being a feminist, the fact that we can do and be both.