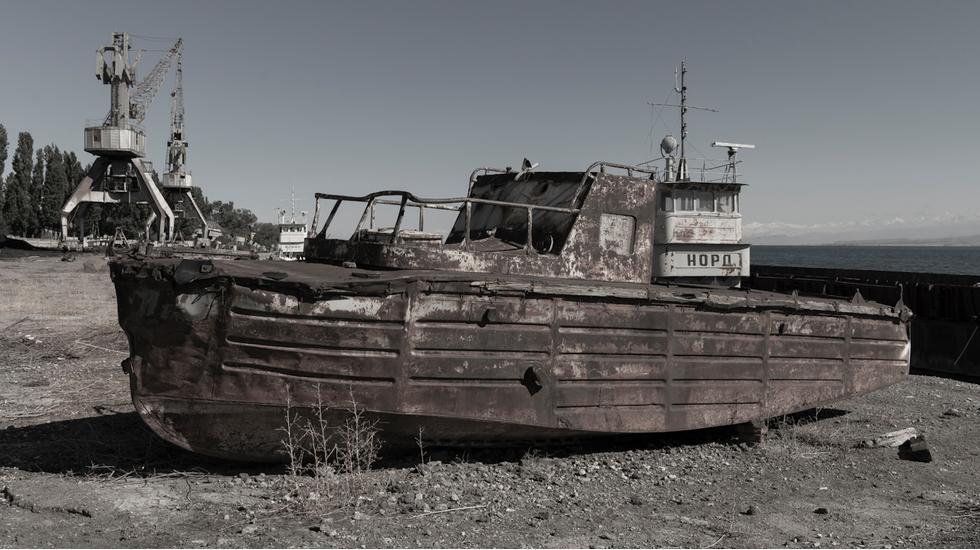 More More than a quarter of a century after the break-up of the USSR, Balykchi, once one of Kyrgyzstan's industrial powerhouses is a Soviet ghost town. Situated on the banks of a great alpine lake, it's a symbol of communist decay. Hulls of ships and cranes rust at its port and factories lie in ruins; parks that were once the pride of the city are filled with weeds; statues of Lenin crumble.

Balykchy - meaning "fisherman" in the Kyrgyz language - has a strong fishing and boat-building heritage which was devastated by the break-up of the Soviet Union which brought and end to trade links and financial backing from Moscow. As factories dwindled to a halt, people lost their jobs and the town eventually went from full employment to almost nothing.

Young people were forced to leave their country and find work in Russia and Kazakhstan, often leaving children with their ageing parents. Today these pensioners cling to communist ideals and dream of Soviet times when food and housing was cheap and they could afford to travel to Moscow and Kiev. They struggle to survive on meagre pensions, caring for their grandchildren.

Olga Ogarkova, 61, lives with her husband Oleg. "During Soviet times life was good," she says. "We all had jobs and a reason to get up in the morning. We could travel to Moscow, Uzbekistan and Kazakhstan," she continues, showing me photos of her travels and May Day marches during the Brezhnev era. "Now young people just hang around and drink vodka there's nothing for them to do."

Valentina Pogojeva has acted as a full-time mother to her two grandchildren Dasha and Lena since they were both 10 months old. Her daughter Nadejda works for an engineering company in Almaty, Kazakhstan. The girls have different fathers, neither of which keeps in touch. Their mother returns home for 3 days each month. "She comes laden with presents and plays with them," explained Valentina. "But to know your children you have to see them every day."

In a crumbling whitewashed mud bungalow on the outskirts of Balykchy, six-year-old Adinai is propped up at the kitchen table beside her two sisters Aklai, 15, and Ryana, 12, and their grandmother Samira Omuralieva. Flies buzz around a plate of dried bread and a pile of chicken bones left over from lunch. Adinai was born with brain damage and needs regular physiotherapy which is why the girls' mother Diana has been forced to work in Turkey as a nanny to pay the medical bills. The girls' father isn't around so Samira and the two older girls take care of Adinai.

Times are also hard for Gulbubu Sarapldinova who looks after 3 grandsons. Her son and daughter-in-law abandoned the children with her eight years ago and never returned. "Money is very tight but what can we do," she says.