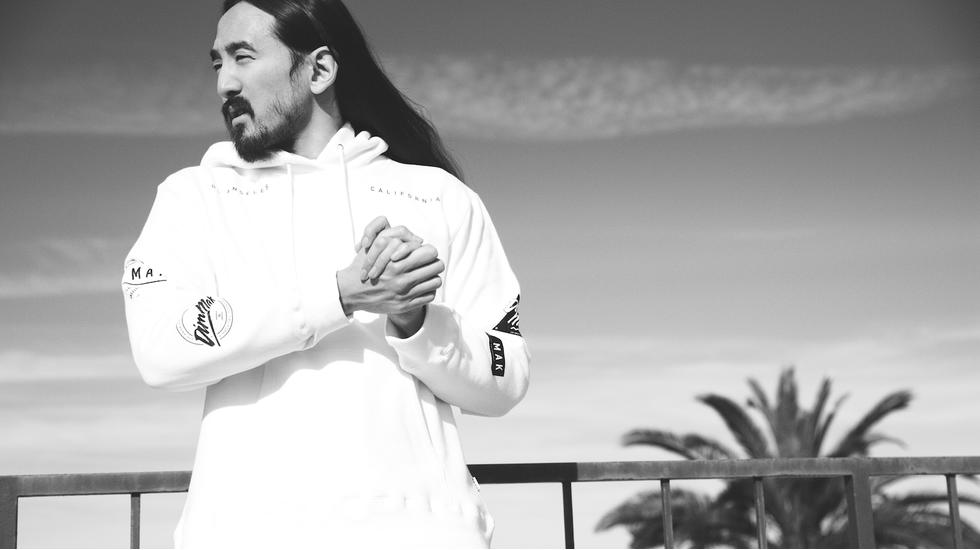 Steve Steve Aoki doesn't sleep. At least that's what it seems like. It's 2.30AM on a Thursday but the screaming, jumping fans surrounding his DJ booth in London nightclub Chinawhite give the impression that it's 9PM on a Friday. Lindsay Lohan sits in a booth opposite, smoking cigarettes and bobbing her head. His posse of creative friends, stylish models and photographers are dancing on couches cheering him on.

Just the day before, Aoki had been sitting in a small armchair across from me in his socks and distressed-beyond-repair denim. He'd spent a full day of travelling and interviewing and, as the previous interview ended and mine began, I realised that a moment of rest is always fleeting for him.

He's okay with that, though; in fact he loves it. The world-renowned DJ, nightlife king and ultimate party-thrower has too much music to play, too many clubs to fill and and too many hits to create to rest his head. A new Netflix documentary about his life - aptly named, I'll Sleep When I'm Dead - delves a little deeper behind these sleepless nights, the death of his father and music production.

But for Aoki, music hasn't always meant clubs filled with thousands of people and giant bottles of monogrammed alcohol. It started with a mixtape cassette when he was a teen. A playlist including Gorilla Biscuits and Minor Threat led him down the path to a subset of punk called straight-edge hardcore. He was enticed by this it's inclusive way of thinking; it encouraged others to get involved in the music industry. "I had a really welcoming environment - it was like fertiliser. I didn't have the right tools, but it was enough for me to have the motivation to say, 'I don't know how to become a musician, but I'm gonna fucking do it.'

And he did. Fast forward and Aoki is playing his own hit songs and sets at the top nightclubs across the world - Ibiza one night and Las Vegas the next. But despite his fame and four-million followers on both Instagram and Twitter, he has an appreciation for smaller crowds too. "Whether you're in entertainment or in business, whatever service you provide in that space whether it's in front of five people or 50 people or 100 or 5,000, you want to make sure that it's really potent and really special. Those 50 people are the most important fucking people that you can talk to. You're communicating with those people and they're there to be part of your experience and your world; they came all the way to see you."

Aoki's optimism and grit are his defining trait, and his label Dim Mak's motto - "By any means necessary" - speaks to that. His past struggles with fitting in never channelled into resentment, only hopes that his music would connect people rather than separate them. "In punk we were proud of what we were doing. People didn't let us into their cool spots, so we created space to do our own thing. My whole train of thought about music became about inclusivity and how can I make this music so it could touch more people." The way he and his music bring people together shows. At the club, Aoki announces that he wants to make a Snapchat story. Strangers jump on each other's shoulders, friends wave frantically and people sing Aoki's song lyrics as he films. He's standing in a sea of beaming strangers, brought together by the songs he's produced. Never sleeping seems to be a pretty good trade-off.

In between promoting his documentary, throwing ragers and writing his new album Neon Future III, Aoki filled us in on his favourite clubs, the people he admires and what keeps him up at night.

What makes you cry?

The song I Love it When You Cry.

What never fails to make you laugh?

Last night I made these video game bets with my friends. I won, so it was fun to laugh at them.

What keeps you up at night?

Not finishing a project I'm supposed to finish. I'm generally pretty good about it.

What scientific advancement excites you? What scares you?

The ability to reverse cellular degeneration would be exciting because you could live forever… unless you get hit by a bus. One that scares me is the advancement of AI [artificial intelligence]. Once machines become self-aware, we'll have to put some sort of limitation on them or else they could turn against you... maybe.

Where do you go to escape?

I meditate every day.

What's the perfect vacation to you?

It's seasonal: in winter I like to go snowboarding, in summer I find cliffs to jump off.

The last book you read?

Ego is the Enemy by Ryan Holiday.

Which women do you admire that are not related to you?

What's the best nightclub in the world?

AgeHa in Tokyo. Actually, I want to give love to my Vegas nightclub, Hakkasan, because they keep my lights on.

The nightclub with the best stage design in the world?

Now I can shout out ageHa from Japan. I like big stages.

The craziest location you have ever played in?

I played in the largest arcade video game stage. That's something weird.

The most understated club which plays the best music?

I'm gonna have to say my old club Dim Mak studios - it was super small. We ran that place to the ground in ten years. We broke some amazing acts there club.

The best party in Vegas?

One of my parties - obviously. Either Aoki's Playhouse at Wet Republic, Neon Future at Hakkasan or my shows at Omnia or JEWEL.