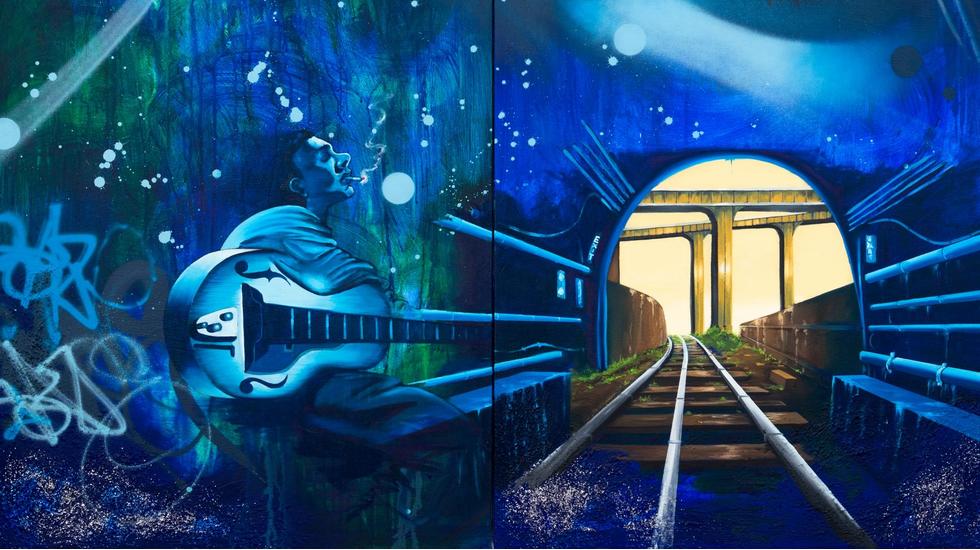 Brooklynite Brooklynite and artist, Chris "Daze Ellis", has navigated an interesting career trajectory. From tagging subway trains in the 70s to his first solo show held in Fashion Moda, an alternative art space in the South Bronx, Daze recalls the early days of his career with fondness and clarity.

"Some of my peers, such as Futura2000, Crash and Lee Quinones had already presented their first shows. I was anxious to have one as well because I thought of it as a next-level accomplishment. I still think of it as such. Not only did many artists come but also a lot of people from the neighbourhood. It was the start of an ongoing dialogue."

That dialogue has been interspersed with a host of international voices, occupying a multitude of spaces, conventional and otherwise. With a splintered focus, Daze has delved into everything from TV work, consulting on Baz Luhrmann's Netflix series The Get Down, to developing mentorship projects in Rio de Janeiro and Baton Rouge. "Teaching workshops in these underdeveloped areas opens a door and helps students understand their creative potential."

With inspirations ranging from Marvel comic books to Martin Wong, Daze's interests are encyclopaedic and his practice broad, but his travel plans are surprisingly regimented.

I'm from Brooklyn originally - Crown Heights to be exact. I continue to think of Brooklyn as a borough that is made of many very distinct neighbourhoods. Each one has their own very particular characteristics, rules, etc.

Why did you choose "Daze" as your graffiti tag?

It was pretty simple; I chose the letters I could draw best. That's it.

Other US cities upping the stakes in street art?

What made you switch from subway cars to canvas?

The switch was more of a slow transition. I never just stopped painting trains abruptly. I eventually stopped because I was just getting older and felt I had done everything I could in that context. I also felt I could reach a much broader audience with my paintings.

You worked as an art consultant for Baz Luhrmann's Netflix series, The Get Down. Tell us about that experience.

It was great to work with Baz and the entire crew. Everyone who worked on The Get Down was really committed to the end result. Usually I'm working on projects solo but being a part of a team was different. I liked watching how all these elements came together in the end.

What artists have influenced your work?

I'm working on an exhibition with Woodbury House in London. It will be my first solo exhibition in London and I'm really excited about it. The last time I was in the city was in the 90s, so I'm looking forward to seeing how much it has changed. In addition to the show, I'm hoping to paint a couple of murals and do a book signing at the Rag & Bone store in Soho.

Tell us about some creative references you return to time and time again.

I always seem to return to painting some aspect of New York. Painting portraits of women is something I'm still drawn to.

You grew up in Brooklyn. What are some of your favourite places in the area?

Coney Island is no doubt my favorite. I've painted and photographed it for many years. It's a world within itself. There is no place like it anywhere.

The best way to travel in New York is…

Although I really hate it, I would have to say the subway. It's unreliable, dirty, sometimes dangerous, and you're lucky to get to your destination in a timely manner but it's still the best way to navigate the city.

Is the city a central theme in your work?

New York is my Gotham City.

What are some of your favourite places in the city and why?

Coney Island and the Metropolitan Museum. If I ever moved from New York I would really miss these places.

Best cities for graffiti include…

What destinations inspire your creativity?

The last place I visited where I thought I could stay and create a whole new body of work was Havana. Even though there is a lot of poverty still and it's difficult, there is culture everywhere.

Improvisation seems to be a key part of your work. Is your travel as spontaneous or are you more of a planner?

My travel has to be really planned out. There is nothing spontaneous about that. I love exploring new places, I just don't always enjoy how long it can take to get there. When I travel, I make the most of all my time and appreciate my surroundings, but I always love going home to my family.

No Regrets, the Life of Edith Piaf by Carolyn Burke.

A toothbrush and clean underwear will get you far.

The above as well as jeans, painting kicks, reading material, clean shirts, music and deodorant.

Chris Daze Ellis' exhibition with Woodbury House, The Journey, will be on exhibit at 15 Bateman Street, Soho from 10-11 May 2019.