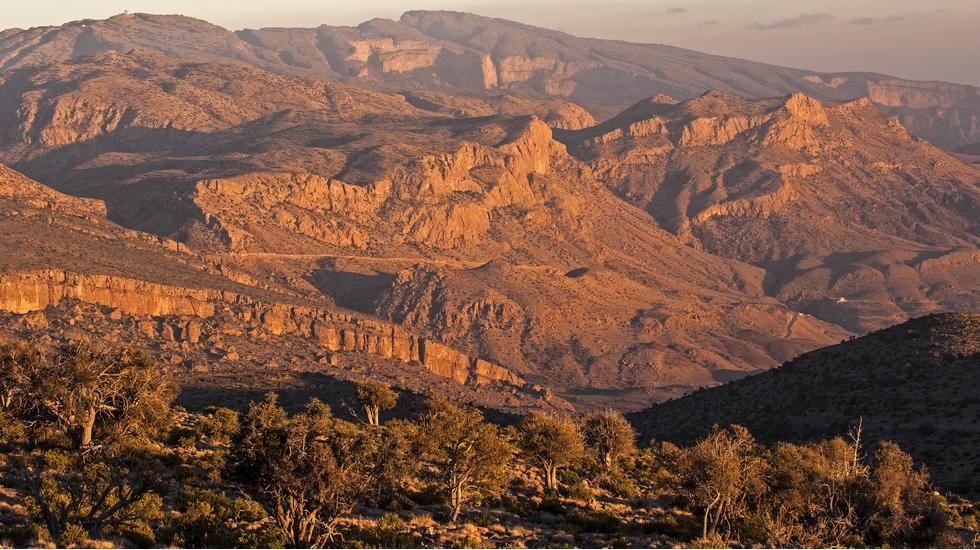 My My mother makes the sand-dusted drive from her home in Abu Dhabi to Oman for weekend getaways regularly. Each year when my family debates where to spend a holiday together, she throws Oman in the mix.

Let me rewind a little. As a third-culture family that once moved every two-to-three years and now lives across multiple countries, we have ritualised our annual reunions in far-flung destinations. This year, my mother's pick won. That's how I ended up standing atop a steep cliff, watching the sun set over the Jebel Akhdar mountains at the luxurious Anantara Al Jabal Al Akhdar Resort.

My mother had often regaled me with tales of Oman's expansive mountain ranges and crystal-clear waters. Yet while its landscape mimics the sand seas that stretch into the United Arab Emirates and Saudi Arabia, the country is also famed for its natural landmarks including wadi sinkholes and towering rock formations.

As a self-proclaimed city dweller, I was drawn to the idea of visiting the Al Hajar mountain range in the northeast and specifically the Jebel Akhdar mountains - the "Green Mountains" - that lie within.

On first impression, the quiet, uncrowded Anantara Resort presented a much-needed contrast to the concrete jungle from where I hailed. In the distance, layers of mountain faded as far as the eye could see, speckled with greenery. To my right, the terrain was dotted with three villages. I was intrigued: who gets to live here? A few whispers at our hotel later and I was introduced to Suleim, an Omani mountain guru who would walk us through each one.

Having only admired the villages from afar, I expected to witness the bustling life of the locals within them. I guess that's the funny thing about expectations; as we walked along roads edged by steep mountain drop-offs, Suleim began to unravel the realities of Al Aqr, Al Ayn and Ash Shirayjah. He laughed at my first question: "how many people live there?"

Suleim recalled his early childhood in the area, recounting the hours he would walk to get to-and-from school each day. When, in the mid-80s, Sultan Qaboos bin Said al Said built roads and schools across the Al Hajar mountains, many inhabitants moved towards the new developments.

The Jebel Akhdar mountains are of particular historical and environmental importance, having been the scene of large Omani battles in the 20th century and more recently declared as a nature reserve. It means that the government is heavily invested in the area's development - and particularly in maintaining the smooth, scenic roads that brought me here.

As my family and I arrived at Al Aqr, we were greeted by an elderly man, the village's sole inhabitant. He was, he said, delighted to see us (or any human, for that matter) as much of his days are spent meditating in the crisp breeze on the mountain's edge. He joined us as we explored the crumbling stone frames that once were homes. Behind old wooden doors we found household remnants, each item telling a story - an abandoned wooden crib, a hanging tray that once protected produce from mountain predators. Each place had become a museum dedicated to its former inhabitants, and as I soaked up the eerie sense of energy left behind, I felt as if I knew them all.

Suleim stopped us every few feet to admire marine fossils buried among the limestone rocks. Apparently the mountain vistas I was soaking in were once entirely underwater. Suleim put it in layman's terms for me. Millions of years ago, he explained, the Arabian tectonic plate was driven underneath the Eurasian plate, pushing formerly submerged limestone onto the mainland and creating one of the region's highest mountain ranges. Still today, as plates move and the Red Sea expands in width, Oman is slowly but surely being pushed northward. Standing atop mountains born by the force of nature, everyday events seem insignificant.

It's ironic that a place once birthed from the depths of the sea, is now most famous for its irrigation. The area was given Unesco World Heritage status thanks to a system of channels - aflaj - operated by gravity.

We trace these waterways to the second village, Al Ayn. Here, farms clinging to cliffs remained abundant with dates and olives - even in the off-season. Thanks to Jebel Akhdar's unique location and weather systems, says Suleim, the "Green Mountain" produces a bounty of pomegranates, pears, grapes, garlic and more. Most importantly, Damask rose bushes bloom each spring - it's rose water from these petals, found in abandoned villages, that is famed across the world.

Our journey came to an end on the edge of the third village, Ash Shirayjah. Glancing left, I see a vista of all three outposts, taking in the mosques that still towered over them and the remains of the terraced farms that had made them habitable. I sensed our passive presence in these structures that have stood the test of time, in these vast open-air museums left behind by locals and barely touched by tourists. I turned to my mother as we watched our final sunset and in silence, I mouthed a simple, "thank you". That's the thing about mothers - or at least mine - they are always right.