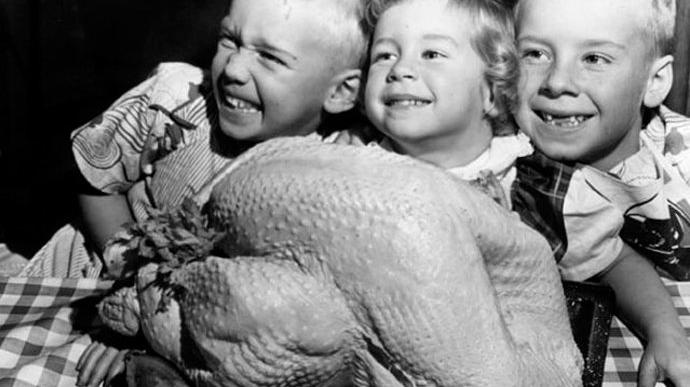 Like Like so many cultural holidays, the modern-day celebration of Thanksgiving has come a long way from its 17th century origins.

Popular history cites that in 1621, pilgrims in Massachusetts sat down for a feast to celebrate the first harvest in their new land. Over the course of nearly 400 years, the tradition has stuck (with some permutations) and to this day, Americans - and an increasing number of non-Americans - gather with families and close friends on the fourth Thursday of November to give thanks for their good fortune.

Or so Hallmark would have you believe…

The reality of modern-day Thanksgivings across the United States tends to be a little less quaint. Like Halloween, New Year's and Christmas, Thanksgiving is a holiday that Americans LOVE but one that also threatens to bring them to the brink of a meltdown.

Travel, for starters, is notoriously nightmarish on the Wednesday preceding Thanksgiving. With most employees granted a whopping TWO days off (Black Friday bonus of course) Thanksgiving presents a rare opportunity to travel across America to visit loved ones without sacrificing paid time off. As such, offices are largely abandoned by Wednesday lunchtime, with employees fleeing cities in an apocalyptic hysteria. Airports, train stations and roads swell with frantic bodies hoping that the first snow of the season doesn't throw their entire long weekend. (And yes, the first snow of the season almost always arrives on Thanksgiving, as if the gods are determined to continue a cruel inside joke.)

If you're lucky to make it home, the next set of hurdles present themselves. Distant family members, uncomfortable new boyfriends/girlfriends being brought home for the first time, one person struggling to put together a four-course feast for 20 people and an abundance of alcohol make Thursday a social minefield. Few make it through the day unscathed and some will find themselves completely obliterated in a verbal showdown with drunk Grandma.

For those with totally harmonious family dynamics (good for you) there's always the self-hatred and loathing that comes with a day of non-stop eating and general immobility. Apart from the main event - a giant roast turkey -Thanksgiving food favourites include: sausage stuffing, sweet cranberry sauce, sweet potato with marshmallows (really) and a deliciously rich pumpkin pie. FYI, most hosts will have at least four desserts on offer. Sure, there's the obligatory collection of vegetable sides, but the focus is on carbs, meat and sugar. The Friday morning comedown is generally cured by the hair of the dog: leftovers, more alcohol and crazy sales shopping.

Yes, Black Friday - the most notorious retail day of the year - marks the launch of the holiday season and the ultimate opportunity to get all of your Christmas shopping done at a bargain. Of course in reality, most Americans, already on the heels of their day of gluttony, treat themselves to a day of retail therapy and save actual Christmas shopping for 24 December (arguably a day of greater stress and more drinking).

So yeah, Thanksgiving doesn't have the best reputation. There's also the uncomfortable history of the Native American massacre brought on by the very pilgrims whose tradition we emulate - but that's a much longer discussion for another time.