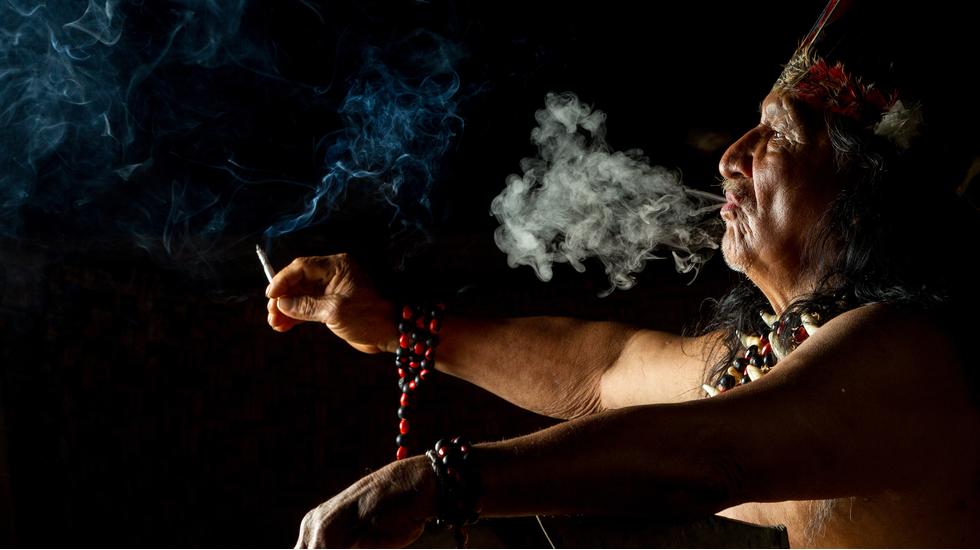 Robert Robert Gordon Wasson was an atypical psychonaut - an inquisitive Wall Street banker drawn to Mexico by an interest in wild mushrooms. In a small Mazatec village in the mountains of Oaxaca he would meet María Sabina, a farmer and part-time spiritual healer who would be regarded as one of her country's great poets, yet die as poor as she was born. The banker's fortunes were destined to be different. Having bent the truth to secure his time with Sabina and her "magic" mushrooms, his transformative experience would be written up in Seeking the Magic Mushroom, a now infamous Life magazine article from 1957. Things would never quite be the same again.

By the mid-1900s natural hallucinogens had drifted into plain view via articles such as Wasson's and free-form literature from the Beat Generation. The 1960s took the spirituality of self-transcendence and daubed it in brilliant kaleidoscopic visuals, dancing it through fields and putting a flower in its hair. "He crashed around America selling 'consciousness expansion' without ever giving a thought to the grim meat-hook realities that were lying in wait for all the people who took him seriously," scrawled Hunter S. Thompson of Timothy "turn on, tune in, drop out" Leary in his gonzo masterpiece Fear and Loathing in Las Vegas.

But dust settles and the pendulum of psychedelia is swinging back to its roots in science and mental health. At a 2006 symposium celebrating his 100th birthday, Francis Crick - the Nobel Prize-winning father of modern genetics - revealed that he was under the influence of the "wonder child" lysergic acid diethylamide when he discovered the double-helix structure of DNA. Silicon Valley is also turning its attention to the body and mind, with the trends for fasting and micro-dosing leading the charge. Without the backdrop of the San Francisco scene's swirling concert posters or the soundtrack of George Harrison plucking a sitar, psychedelics are gaining a more credible reputation. Will the next stage of transformative travel be played out within us?

Much has been made of the surge of interest in ayahuasca, an ancient Amazonian hallucinogenic brew typically administered by shamans under ceremonial conditions. Billed by The New Yorker as "the drug of choice for the age of kale", the potent psychedelic has found itself an uneasy poster child for a renewed interest in "psychospirituality", with millennials flocking to South America in a bid to expand their cosmic consciousness. It's easy to dismiss the Brooklynification of anything, but as quarter-of-a-billion-dollar apps like Headspace and Calm have taken meditation to the masses, ayahuasca's ability to reconnect the mind and soul to nature means that interest in it is unlikely to reverse, especially while it remains legal in certain countries.

The problem? As is often the case with the clumsy-footed West, spiralling prices for a scarce resource is taking it out of the hands of the Amazonian tribes who have used it as medicine for thousands of years. One luxury retreat offering "gourmet ayahuasca-appropriate meals" and one-on-one ceremonies with shamans advertises prices starting from £7,850 per guest. Another has positioned itself for entrepreneurs, offering programmes for "business leaders, start-up founders and thought leaders". For a generation fixated on issues like plastic straws, many still charge through life oblivious to sustainability issues until they become a digestible trend. Sure, there is value to be had in undertaking rituals largely unchanged to those Wasson experienced in the mid-20th century - but should the mindfulness minutes you've built up on your smartphone have taught you anything, it's to move with heedfulness and respect.

Inspired by a new wave of clinical trials using hallucinogens to assist in relieving anxiety and existential distress in terminally ill cancer patients, American author and journalist Michael Pollan's foray into transcendentalism - documented in his brilliant book How to Change Your Mind - is a far cry from the consciousness-contorting hedonism of the 1960s. Moreover, his research delineates a potential near-future for psychoactive substances where their interaction with wellness is more profound than a Beat Generation-inspired pilgrimage to Peru. Far from an argument for the recreational use of psychedelic drugs, Pollan's musings ponder the legitimate existence of mental health spas, where experts offer a guided psychedelic experience using nothing but our bodies and the depths of our consciousness as stimulation.

Stanislav Grof, an early advocate of LSD, developed a breathing technique he called Holotropic Breathwork upon the drug's prohibition in 1966. Said to induce an altered state of consciousness, alternate pairs of "breathers" and "sitters" ensure that it is a guided and safe experience. Grof calls it an "expanded cartography of the human psyche" and many of those who've undertaken his programmes claim to have relived their own birth simply from combining conscious control with breathing. While something that lies at the more outré corners of a movement that incorporates more accessible practices, breathwork, as countless articles will contest, is seen as one of the next big things in wellness.

As the millions of newcomers to meditation will have noted, breathing is an integral part of accessing our intuition. It's where our consciousness and subconscious meet and where we can begin to exert control over the parts of ourselves that are usually exerting control over us. As mindfulness has overtaken Ayurveda as the buzzword on spa menus across the world, expect breathwork to accompany yoga and meditation in the wellness revolution. Be it mental health spas where veritable psychedelic experiences aid issues such as depression or addiction or lite updates on Grof's path to out-of-body experiences, consciousness expansion is the new currency in wellness.

As the sniggering that surrounds New Age's perceived corniness has been dampened by a mainstream adoption of meditative practices, today's great explorers are becoming those who are journeying within. We are plotting new maps of the mind - and these paths might help us reroute millennials from Amazon's rainforests. The future of psycho-travel might look like MycoMeditations - an outfit hosting seven- and ten-day psilocybin-assisted therapy escapes in Jamaica - or Ganja Goddess Getaway, a cannabis- fuelled women's retreat that lives by the principles of "self-love, inclusivity, empathy, good fun and mindfulness". It could definitely look like the buoyancy that cannabis tourism is enjoying following America's dramatic perception shift when it comes to marijuana. It might simply be a case of virtual reality. Whatever it is, we need to understand that the future of travel could be separated from the physical notion of transport - that "travel" is a matter of perception. Our grasp of what goes on inside our minds is as deficient as our understanding of the deepest waters or farthest reaches of the galaxy. The new frontiers lie within.