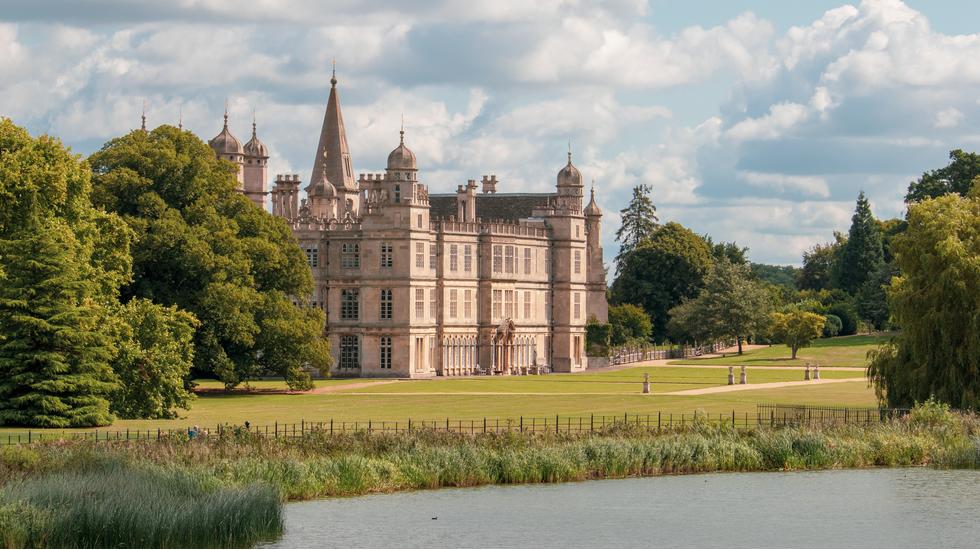 Set Set between 1979 and 1990, season four of The Crown is, according to TV critics, the best yet, with the introduction of the people's princess, Diana (played by Emma Corrin) and Margaret Thatcher (Gillian Anderson) as well as the royal rollercoaster of events including the Falklands War, IRA terrorist attacks and apartheid in South Africa.

Rumoured to be one of the most expensive TV shows ever made, the series is known for hunting down the UK's blue-blooded elite of filming locations - Greenwich's Old Royal Naval College, Eltham Palace, Waddesdon Manor, to name a few. Here, we're giving you a peek inside some of the new stately stand-ins you're likely to spot in season four.

Behind the scenes: the places you can visit in Netflix's new season of The Crown

In the 80s, Prince Charles set up home in the Gloucestershire estate of Highgrove. Tours of its manicured gardens run from April to October each year - especially good when polished off with a champagne afternoon tea in the Orchard Tea Room. Filming for these scenes actually took place in the 18th-century, Grade II-listed Somerley House on the bucolic cusp of Hampshire's New Forest and Dorset. This particular pile isn't open to the public, so if you want to get under the skin of the new season, you'll have to hire it out for a private event.

Expect to get well acquainted with Charles and Diana in season four, in which many scenes are set in their Kensington Palace pad, where the Duke and Duchess of Cambridge live today, tucked in the grassy folds of Hyde Park. Filming actually took place across two separate locations, one being the 19th-century, Grade II-listed Harefield Grove, a historic house currently being converted into residential properties. It's on the eastern fringe of the Colne Valley Regional Park so we suggest driving by before getting a fix of nature.

Stay: This oak cabin in Berkhamsted

The other dupe for Kensington Palace? Brocket Hall, which has also appeared in The Queen and the mid-90s version of Pride and Prejudice. Built in 1760, this oh-so stately country pile has been called home by not one but two PMs - Lord Melbourne and Lord Palmerston. Put your pinkies up for afternoon tea and tour the house (the chinoiserie-style Prince Regent suite is our favourite) before checking into Melbourne Lodge on site. Under normal circumstances, its calendar includes jazz performances and dining experiences.

The red-bricked Northern Quarter in Manchester makes a convincing stand-in for New York in season four, when a young Diana takes a solo trip to the Big Apple's Henry Street Settlement, a shelter for homeless families, and the Harlem Hospital in 1989. Gaze past the yellow taxis, 80s outfits and stuck-on subway signage and you may well recognise Stevenson Square. It doubled up both as the Bronx and Manhattan's 23rd Street Station.

In previous seasons, Sandringham was shot at Englefield House in Berkshire, where gardens are open to the public. For the latest installation, the filming location for the royal's Norfolk crash pad upped sticks in favour of the Grade II-listed Somerleyton Hall in "the wilds of East Anglia" (so says its website). Pootle around its 12-acre gardens before knocking back Suffolk ales in The Duke's Head, the estate pub, or tucking into locavore dishes at The Fritton Arms.

Another filming location that has moved for season four is that of Windsor Castle - for seasons one to three, the crew made tracks for Lincolnshire's Belvoir Castle. This time around, it's embodied by Burghley House, a 16th-century Elizabethan affair built by William Cecil, Queen Elizabeth I's Lord High Treasurer. The house and gardens are closed to the public until March 2021; in the meantime, take a nosey around via this interactive tour - the Heaven Room is pretty special, as is the Hell Staircase.

You don't have to be a royalist to know that the Queen likes to summer on her Scottish estate of Balmoral, which Prince Albert bought for Queen Victoria in 1852. Filming is a no-no in this private residence, so the 19th-century baronial house of Ardverikie makes a convincing dupe. You'll likely remember this spot from previous seasons, but in season four it's where Charles and Diana spend their honeymoon. Tour the castle, join a stalker to feed the wild red-deer herd and live like a royal in one of the estate's several holiday cottages.

Of course, if Charles and Di are honeymooning, they'll be getting hitched in season four too. The pair famously tied the knot at St Paul's in 1981 in the so-called "wedding of the century", with Diana donning a meringue-like dress by designer Emanuel. St Paul's is, of course, open for the public to gander about or join a service, but filming actually took place in 11th-century Winchester Cathedral, one of the largest in Europe. Don't miss Sound II, an Antony Gormley statue installed in the crypt in 1986 or Jane Austen's tombstone in the north aisle.

Set in 300 acres of parkland just 30 minutes' drive from central London, this neo-Palladian home of the Byng dynasty hasn't changed much since its builders put down their tools in the 1750s. It comes as small surprise, then, that it has formed a louche backdrop to films such as Gosford Park, Kingsman: Secret Service and, in fact, for previous seasons of The Crown, in scenes where the Queen meets with the PMs. In season four, Wrotham is reincarnated as Gatcombe Park, the Gloucestershire home of Princess Anne. It's not generally open to the public, but those with a spiffingly healthy bank account can hire it out for events - Simon Cowell held his £1million 50th-birthday bash here in 2009.