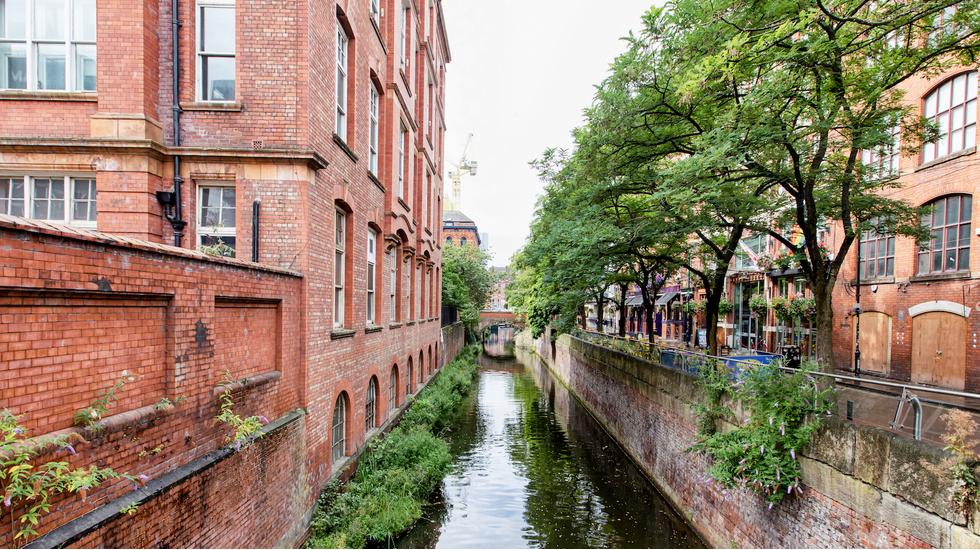 Famed Famed for football, music and distinctive haircuts, Manchester has left an indelible mark on the world. England's "Capital of the North", this once industrial city is now perhaps the UK's most vibrant, and in recent years its progressive attitude and thriving street culture has proved a magnet for a new breed of youthful, international resident.

While one of the country's largest metropolises, its relatively condensed urban core is a coup for visitors, with distinctive neighbourhoods jostling for supremacy beside one another, but easily navigable on foot.

The cobbled streets of the Northern Quarter and the budding Ancoats districts are a cosseted world of cool cafés, independent shops and diverse drinking dens. Break out from this hipster haven, however, and there's the neon-lit Chinatown, with its authentic dim-sum restaurants and karaoke bars; the glossy boutiques and cocktail bars of Spinningfields, flanked by contemporary skyscrapers; and an abundance of sweeping city-centre squares bordered by art galleries and imposing neo-gothic architecture.

George Orwell may have described Manchester as the "belly and guts of the nation", but with a warm people and an open character, it may just be its heart as well.

Set inside an arresting art-deco, Edward Lutyen’s designed building, The Gotham is a spirited homage to the decadence of the 1920s and 1930s. Clearly taking a leaf from the “more is more” manual – or perhaps from the hardback copies of The Great Gatsby that grace bedside tables – it’s heavy on style and light on understatement. Wardrobes are inspired by the handsome travel trunks of the Jazz Age, and festooned with martini glasses and hard liquor, while some suites feature brass roll-top baths and fuchsia velvet sofas. Although otherwise members only, the rooftop cocktail hangout, Club Brass, is open to residents and is a natty spot to imbibe while taking in the balcony views of the city centre.

A baby grand designed for grownups, King Street Townhouse mixes classic, comfortable charm with quiet notes of luxury. While there’s much here to scream about, the general attitude is one of secluded retreat – with guests shielded from the hubbub of the city behind the hefty, Italian Renaissance style facade. But while the snug bedrooms and slick ground-floor tavern are enough to entice, the rooftop infinity pool is perhaps the hotel’s ace card. Unique in the city centre, guests can while away a morning watching the sun break over Town Hall, or take an early evening dip and survey its retreat behind the sprawling expanse of rooftops. Located in the heart of the city, the hotel is also just a few minutes stroll from Manchester Art Gallery, Chinatown and the photo-friendly Albert Square.

Formerly the storied Palace Hotel, The Principal is something of a Manchester icon – its well-known, early 1900s clock tower looming over Oxford Road. Inside, original details have been given a spit and a polish, and hallways are lined in heritage tiles, many bedrooms are wood panelled and an ornate marble staircase connects floors. For anyone with an eye for architecture, the hotel is a treasure trove of period touches, albeit dressed with more modern features such as vinyl players in the suites and “tuck boxes” stuffed with complimentary snacks. Those wanting to soak up the laid-back grandeur of the place without overnighting, meanwhile, should check out the cavernous The Refuge restaurant and bar. Created by two local DJs turned restaurateurs, it’s a popular locals haunt for dinner, dancing and most things in-between.

A short tram ride from the city centre, in leafy south Manchester, lies Didsbury – an affluently bohemian neighbourhood overflowing with independent eateries, hip boutiques and Patagonia-wearing locals. Though there’s plenty to discover in this fashionable enclave, it’s also a neat base from which to explore the wider city. Didsbury House, a 27-room Victorian townhouse, is the area’s most elegant stay – set back off a quaint residential street but close to the bars and bistros of Burton Road. Traditional, without veering into twee, rooms feature book-lined shelves, patterns galore and sumptuous furnishings, hitting that aesthetic sweet spot between country escape and urban bolthole. The open lounge, with roaring fire, evokes the feel of a close friend’s sitting room, inviting you to dissolve into one of the sofas with a book in hand.

Set across three former export mills, Whitworth Locke is a culturally minded aparthotel that aims to embed guests in the local community. From yoga classes to film nights, there’s an eclectic programme of in-house activities for those inclined to mingle, while the vast, meandering ground floor is given over to co-working spaces, a neighbourhood café and a nonchalant lobby bar. The studios themselves are ideal for those who dream in pastels, with exposed-brick walls in blush salmon and mint-coloured ceramics. Each comes complete with a dainty kitchenette, the fastest hotel WiFi in the city (we’re told) and Apple TV. It may not be in the coolest neighbourhood – squeezed between The Village and an unassuming arterial road – but like most central hotels, it’s within wandering distance of the key sights.