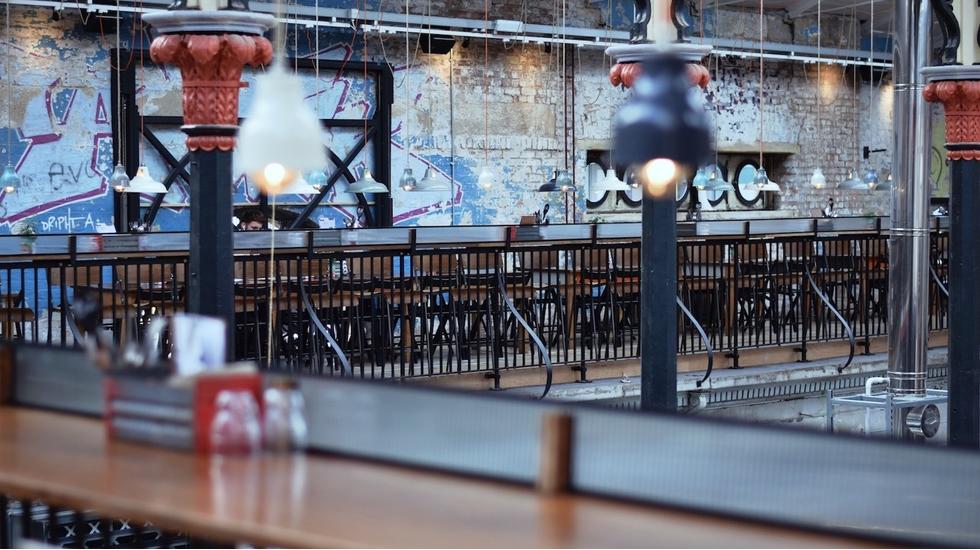 Launched in an archway behind Manchester’s Piccadilly railway station, Pollen Bakery became the go-to nook for sticks of sourdough and sweet pastries. After a couple of years of mounting popularity, driven mainly by word of mouth, it ditched its humble first home and today resides in swish new canal-side digs in Ancoats; all buffed concrete and raw wood. As well as the distinguished breads and heavy slabs of cake, there’s a brief but satisfying weekend brunch menu. The cruffins, meanwhile, are the stuff of modern Mancunian legend, even if they’re only available on Saturdays.

A Victorian market building turned modern food hall, Mackie Mayor hosts a selection of restaurants – as well as a couple of smart coffee shops and bars – around stretches of central communal seating. Heaving on weekends, service is brisk, although it’s still usual to overhear out-of-towners griping over having to pay £15 for a small fish finger sandwich or £4 for a solitary cookie. So while this isn’t cheap and cheerful street food, the quality is high. Head to Reserve Wines for some unfamiliar bottles and, during the day, be sure to try the coffee from Atkinsons, where you may be lucky enough to find the restored 1919 bean roaster doing its thing.

Like any large city, Manchester has more than its fair share of pizza places; but there’s pizza and then there’s Rudy’s. The menu is to the point and dispenses with any pointless bells and whistles in favour of classic combinations. This is straightforward dining for those who revel in delicious simplicity. There are two locations in the city centre, one in Ancoats and a newer site close to Albert Hall – an artfully crumbling concert venue. If you’re planning on taking in a show, this is an ideal spot for some pre-music feasting but, as it’s walk-ins only, best to factor in some queuing time or risk missing the opening number.

This charismatic Polish eatery, on a quiet backstreet off Deansgate, is still off the radar for most locals and yet serves some of the most comforting dishes in town. There are just a handful of tables and the day’s produce spills across an open kitchen counter: blocks of imported cheese, bowls of shining mackerel and great mounds of colourful veg. The artisanal menu changes weekly, but think the likes of pan-fried duck breast with blackberry sauce and dumplings, or cured fish with beetroot and dill sauce. A selection of homemade polish cakes are always on hand to round out the meal, but you’ll equally be encouraged to go all in with a parting shot of vodka.

Mana is chef Simon Martin’s first independent restaurant, but he honed his craft working at the likes of Noma and Restaurant Gordon Ramsay. In the blossoming Ancoats district, it celebrates seasonal British fare across a conceptual, 16-course menu. The restaurant’s designer, James Roberts, set out to create an almost sacred space, reflecting the deference with which Martin treats his ingredients. Strips of light float above diners, stern black tables play canvas to theatrically plated dishes and a wall is given over to growing herbs. It’s reservations only, so be sure to book ahead.