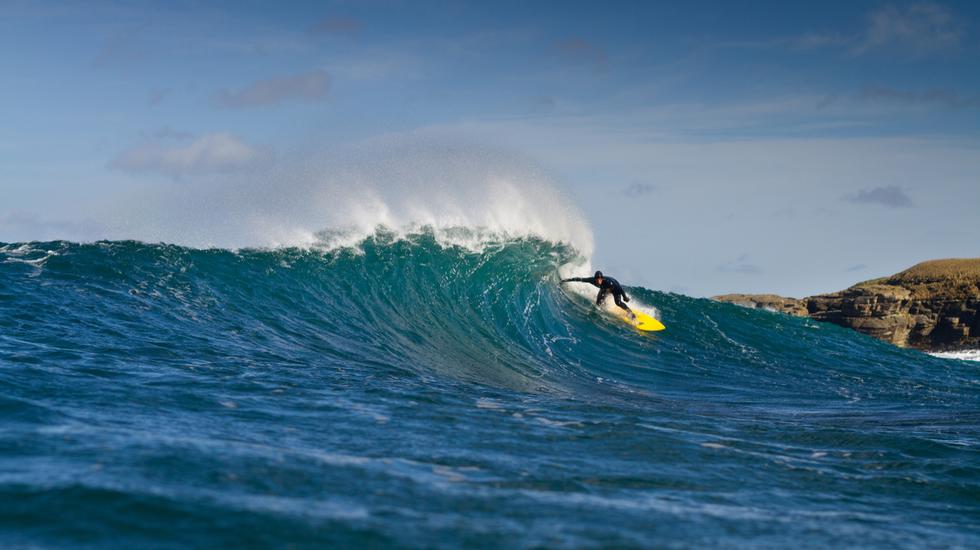 It It is a sunny day in early March and I am completely naked in a beach hut in St Ives, Cornwall. Hopping from one foot to the other on the cold concrete floor, I pull a slimy wetsuit over my body and do hula-hoops with my hips to get it over my thighs. I jump furiously to pull it over my waist and contort my shoulders to get both arms in. By the time I emerge from the hut to begin my first cold-water surfing lesson, I am panting.

I'm led to the beach and join the rest of the group, all of us goofy in our surf school wetsuits and pathetic as we huddle against a concrete wall to block out the cold wind. After a lesson in 'surf pop-ups' we move to the water's edge, dragging our foam boards behind us. I am nervous. I grew up in the gentle waters of the Mediterranean and am notorious for being a complete wimp when it comes to cold water.

A warm-up on the beach is decidedly less Baywatch-esque than I imagined it would be (perhaps it's the rubber cap on my head) but it gets the blood pumping. We are summarily herded into the water by our instructors, who flank us on all sides. There is no escape.

The foamy surf comes rushing towards me. The pressure of the water hits my toes. I seize. I take a step forward. The pressure moves up my legs, my waist. I feel nothing. The wetsuit has done its job.

"It really works!" I exclaim, overcome with joy, and I give my instructor a thumbs up. Then I'm smacked in the face by a freezing wall of water and I go down into the 7°C sea. When I come up for air it feels like someone has opened my head and filled it with ice cubes.

An hour in and I have already stood up on my board seven times, keeping warm by urinating in my borrowed wetsuit (everyone does it) and fighting furiously for the next wave. I climb out of the water and collapse onto the beach, pulsing with exhaustion; this has been one of the most invigorating experiences of my life.

In the evening a handsome surfer/chef named Ben Quinn throws a piece of beef into the flickering coals of an outdoor barbecue, and I hover near him as he carves me slices of meat and tells me about his cold-water surfing experiences. He knows the coast like the back of his hand, gets in the water almost every day and has taken his wife and little girl surfing every year. It becomes obvious that for him, this is so much more than a sport - it is a lifestyle.

While on trips to cold-water coasts, Ben is the one in charge of serving meals in incredibly remote locations. He has to think logistics - fresh food won't keep, so he forages protein from the area and packs food that's light enough to carry.

"You end up with a group of your mates going through an intense experience, and breaking bread reaffirms that experience. There's been many a surf trip where you don't reach expectations of the surf on a wave but you do reach them with the food," he tells me.

He outlines a typical day on a cold-water surfing trip and tells me it would begin with getting out of a tent to sub-zero temperatures and eating a quick porridge breakfast before pulling on a wetsuit. You would then light up hot coals on the beach so they're ready as soon as you get out of the water. You'd go straight into the surf and ride waves in majestic surroundings - castles, snowy sand dunes etc. When you're done with the waves you'll cast a line from your board and hook a couple of mackerel, throwing them directly on to the coals and eating their flesh warm off the bone.

The life of a cold-water surfer is an evolution of the original surf dream - boardshorts are swapped for a neoprene wetsuit and a year-round tan for icicled eyelashes. Behind the desire to explore the frigid coasts of Northern Europe and North America is a group of contemporary romantics seeking the same connection with nature and the ocean as their predecessors, but in different surroundings.

It's a sport that more and more people are signing up to. Easkey Britton, an Irish champion surfer, suggests that cold-water surfing has risen in popularity due to overcrowding in surfer hotspots like Australia, Hawaii and Indonesia.

"People want this experience of beauty and discovering waves with fewer people. There aren't that many places left to choose from except those that have a bad reputation for weather," says Easkey. Enter Norway, Iceland, Scotland and Ireland. Bring on the ice- strewn beaches and trembling grey clouds of the north.

"Cold water is the ultimate leveller because it strips us of all our pretence and it comes down to the gritty reality that you just need to weather it out," Easkey tells me, going on to say that some of the biggest proponents of the sport are women: "It becomes apparent really rapidly that the ocean doesn't care if you're a man or a woman."

Advances in wetsuit technology have also opened up the sport to more people. While Easkey grew up entering the Irish surf in often nothing more than a bikini, her story is unique. It doesn't reflect the normal reaction of a human being entering single- degree water - which is to get out.

Tom Kay, an avid cold-water surfer and owner of cold-water surf attire brand Finisterre, tells me how decades ago, surfers in Scotland used to wear woollen sweatshirts to get into the water. "People have been surfing in these waves for a long time so you can't say it's a new movement," Tom says, pointing out that for years big surf brands were making products that weren't relevant to colder regions.

Insulated neoprene suits have been on the market since the 1950s, but it wasn't until the technology of wetsuits became more advanced - making them warmer and thinner - that more people were willing to battle low water temperatures. Tom took the idea a step further and started creating garments that would be useful for the lifestyle of the sport - clothes that were durable enough for camping, warmed the body immediately and could dry easily if they got wet.

He started by making windproof, waterproof fleeces for surfers to pull on right when they got out of the water and were shivering on the shore, and has since expanded the line to include merino underwear, stylish shirts and dresses for women.

The mere existence of a cold-water surf brand is evidence that the sport comes with its own lifestyle. The fact that Finisterre has done so well in the years since it was founded is confirmation that there are plenty of people embracing this lifestyle, where they can experience their own frozen utopia.

Back in the kitchen, Ben the surfer/chef hands me a burnt pear and gorgonzola salad - hardly surfer-camping fare, but when he pulls a leg of lamb out of the barbecue and begins slicing it, I get a better sense of the food he serves on the road.

"The temperature of the water hasn't changed anything but what it has done is weeded out the half-hour surfers," Ben tells me.

In conversations with cold-water surfers words like commitment, genuine and raw are repeated over and over again like the curving funnel of a wave folding in on itself. It's one part knowing that you're tough enough to survive in freezing waters and one part seeking a connection with the natural world in our increasingly industrialised lives.

I take a sip from a small glass of whiskey and it warms me. I tell myself that I will not be a half-hour surfer. That I will be back in cold water soon.