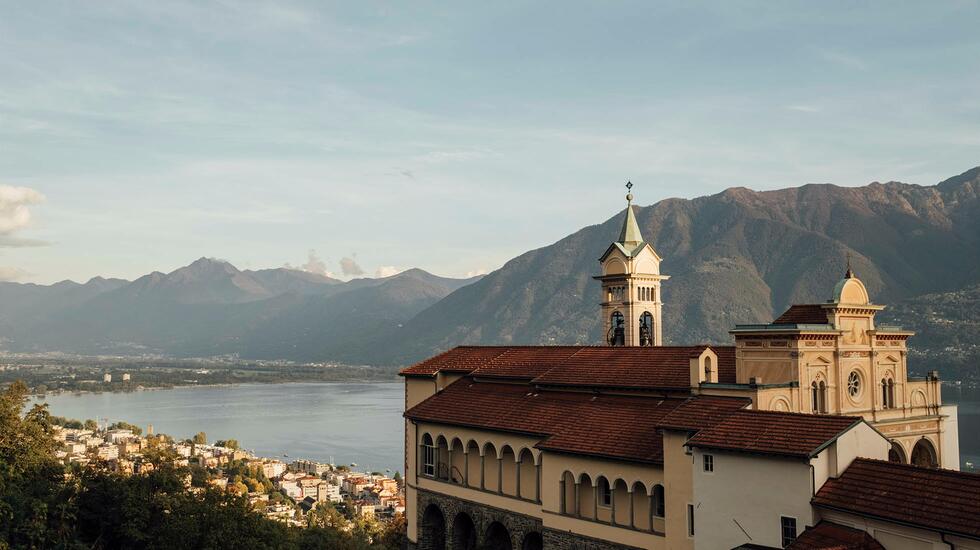 A A visit to the Brissago Islands, a short boat trip across Lake Maggiore from the resort towns of Ascona and Locarno, is a great way to kick off a culinary exploration of Switzerland's Italian-speaking canton, Ticino. The larger of the two islands, San Pancrazio, is dominated by a botanical garden planted with more than 2,000 Mediterranean and subtropical species from five continents. It's the place to taste ripe guava, inhale lemongrass and marvel at a rare and ancient Chilean coconut palm. Blessed with a unique microclimate thanks to its geography, Ticino is one of Switzerland's warmest regions, so just as palm trees grow in abundance lakeside, sun-loving fruit trees flourish. The abundance of life that this sun-kissed, valley-riven and lake-adorned region supports foretells the variety on local menus that travellers can expect.

It's on San Pancrazio, visiting a restaurant and museum tucked into the neoclassical Villa Emden, that we learn about Ticino's longstanding reputation as a bohemian, bucolic utopia. In the early decades of the 20th century, with much of Europe under the dark cloud of oppression and war, this peaceful and naturally blessed region in the southern foothills of the Alps became a haven for artists, iconoclasts and proto-hippies, including writer Hermann Hesse and artist Paul Klee. "In Ticino, we have a special name for these incoming early-20th-century bohemians," explains Simone Schmid, a gardener at the park, and our guide. "We call them 'balabiotts', which means 'dancing naked' in the Tessin dialect." This refers to a Belgian-founded utopian colony whose residents revered nature, grew all their own food, advocated a vegetarian diet and (yes) danced naked on the pastures of the Monte Verità, the mountain looming above the town of Ascona.

Alongside Ticino's glamorous, glossy lakeside resort towns - Locarno, Ascona, Lugarno - all of which famously combine Swiss perfectionism with Italian dedication to la dolce vita, the region's hippy heart has never stopped pulsing. Today, it beats louder than ever, as young, innovative hoteliers, food growers, artisans and chefs rediscover these fertile valleys. Step into any bar in Locarno and you'll find a local brew named Sambì proudly on offer alongside kombuchas and colas. This popular low-alcohol fermented elderflower drink is produced by two young brothers, the winemakers Gabriele and Martino Bianchi. Ticino's winemaking scene is famously a family affair, with more than 3,600 producers cultivating small, steep plots. White merlot is the speciality. At their organic winery, Azienda Agricola Bianchi, in the Mara Valley, the Bianchi brothers produce wine, grappa and honey, but it is their grandmother's Sambì recipe that has seen their label stocked in hip bars and organic grocers as far away as Zurich, Lucerne and Geneva.

Malteria Ticinese is a pioneer of the local craft brewing scene, but started as a side hustle for the family farm, Masseria Ramello.

This is a pattern we start to recognise as we travel around Ticino: young people returning from stints abroad at world-class restaurants, wineries and hotels, to bring a next-gen energy and new verve to a heritage family farm or winery, or set up their own business in their backyard.

On the neighbouring Magadino plain, we chat to Adrian Feitknecht, who has established a wildly successful side hustle at his family farm, Masseria Ramello, by opening Ticino's first malthouse. With a local craft brewing scene blossoming, Malteria Ticinese cuts down on food miles for local breweries, and Feitknecht and his business partner, beer sommelier Manuel Bolliger, offer tastings of local pours. Masseria Ramello is a B&B and organic farm that has been in the family for generations. "We only grow organic barley, meaning that local breweries can make organic beers with our products," says Feitknecht. "The local brewing scene is growing and we have big plans for the malthouse - and fun is very much part of the plan. We wanted to do something that hadn't been done here before." Just down the road from the family farm is another local culinary institution, Tigusto, which has been working with local organic soya producers for over 30 years, making tofu, tempeh and seitan with Swiss spelt flour - artisan, plant-based foodstuffs that form part of Ticino's unique gastronomic heritage.

There is a reverence for the land and what it produces that unites young producers and the older generation here in Ticino, something we come across when we visit the Vergeletto Mill in the historic village of Cavigliano, where slow food pioneer Illario Garbani demonstrates how farina bóna, a finely milled cornflour that lends a comfortingly malty, toasted flavour to dishes and products, has been milled for generations. Across Switzerland, farina bóna is an ingredient whispered about in hallowed tones. In Locarno, the family-run Gelateria Solduno sells farina bóna-flavoured ice cream, and as far away as Zurich, the chocolatiers at bean-to-bar La Flor have incorporated this uniquely Swiss ingredient into a limited-edition farina bóna bar - a cult hit.

In true Ticino style, we travel seamlessly from this historic milltown to a sleek glass-and-concrete complex on the outskirts of Locarno, housing a winery, Vino Hauser, a florist and a hit new restaurant, Osteria Bisnona, where we eat the most memorable meal of our stay. Founded by four well-travelled hospitality high-flyers, the ethos is to celebrate, discover and support the produce, farmers and artisans in this uniquely blessed region. Ticino-born chef Kira Ghidoni has worked with top London chefs including Simon Rogan and Robin Gill, but believes Ticino is the most exciting place she could locate herself as a chef. "It's thrilling to see what's happening here in Ticino at the moment, with so many young people doing cool things, returning to their roots and rediscovering the culinary heritage of Ticino," says Ghidoni. "By being here right now, there's a real sense that we're part of something."

At Osteria Bisnona, we're firmly instructed to visit the teahouse at Fondazione Monte Verità before we leave Ticino. This foundation, hotel and teahouse is what the original 1900s hippy commune has evolved into, with travellers and locals wandering around the tea plantation and Zen garden, before sipping a matcha in the Japanese-style tea room. Drinking in views of the lake, the mountains and the fertile valleys in between, still sated from the dishes that originate here, one thing is abundantly clear: the balabiotts were right about Ticino.

Ready to plot a food-focused adventure through Ticino? Visit myswitzerland.com to get started.